Indonesian Health Minister Budi Gunadi Sadikin on Monday urged Indonesians not to worry about the recent global outbreak of monkeypox, noting at a press conference that while its signature sores would “definitely” make one “look ugly,” the disease has a low fatality rate, meaning one who contracts monkeypox is likely to “survive,” the Indonesian news website Coconuts Jakarta reported on Wednesday.

“You’d look ugly, definitely, but at least you’ll survive,” Sadikin said during a video news conference about the monkeypox outbreak on August 22.

Coconuts Jakarta reported that the health minister made the remark “in jest, after outlining monkeypox’s relatively low […] fatality rate.”

“As for treating [monkeypox], you don’t have to worry too much. The fatality rate is low, the hospitalization rate is low, and those who died did not die directly from the virus, but because of secondary infections from their infected skin,” Sadikin added.

Monkeypox is a disease caused by the monkeypox virus. The virus is zoonotic, meaning it is “transmitted to humans from animals [such as monkeys],” according to the World Health Organization (W.H.O.). The monkeypox virus is in the same family of viruses as the variola virus, which causes smallpox.

Infections of the type of monkeypox virus (the Clade IIb) that has dominated the recent global outbreak of the disease are “rarely fatal,” according to the U.S. Centers for Disease Control and Prevention (CDC).

“Over 99% of people who get this form of the disease are likely to survive,” the U.S. public health agency observed on August 22. 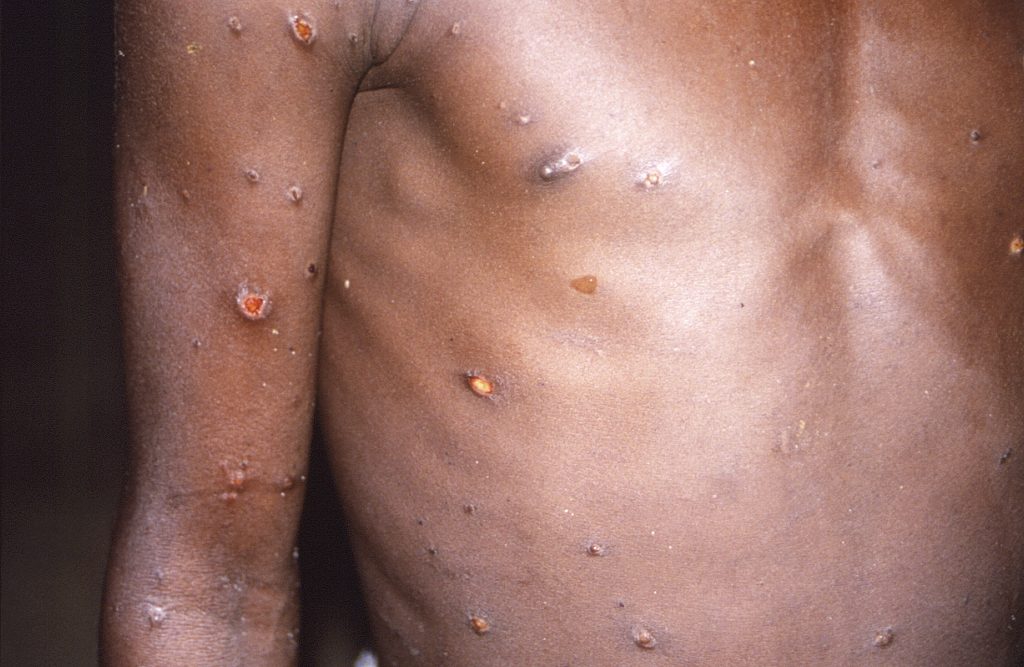 This 1997 image provided by U.S. Centers for Disease Control and Prevention shows the right arm and torso of a patient, whose skin displayed a number of lesions due to what had been an active case of monkeypox. (CDC via AP, File)

Indonesian Health Minister Budi Gunadi Sadikin referred on Monday to a defining symptom of monkeypox, which is a rash consisting of distinctive skin sores.

“The monkeypox rash goes through many stages. Flat spots turn into blisters. Then the blisters fill with pus, scab over and fall off over a period of 2 to 4 weeks,” according to the Mayo Clinic.

Monkeypox has, until recently, primarily occurred in its place of origin in Central and West Africa. Monkeypox cases began sprouting up in countries outside of the disease’s usual territory in January. These cluster infections slowly spread into a global outbreak of the disease, which the W.H.O. designated as “a public health emergency of international concern” on July 23.

“Indonesia reported its first confirmed monkeypox case over the weekend, that of a 27-year-old man in Jakarta who had recently returned from an overseas trip. The patient is self-isolating, has not shown any severe symptoms, and is expected to fully recover,” Coconuts Jakarta reported on August 24.