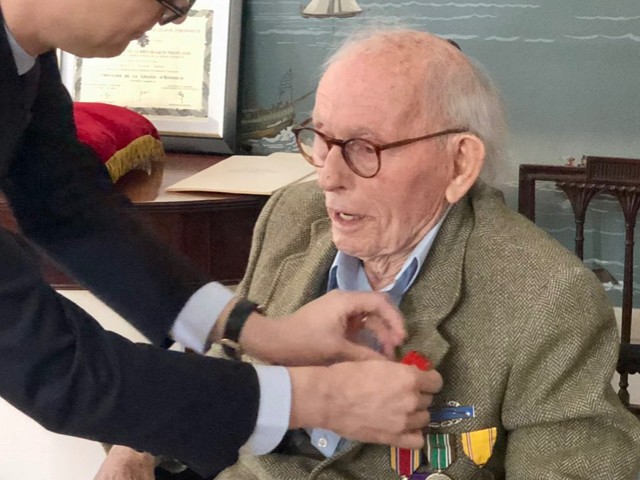 When a 19-year-old named Clark Maser lay wounded on a battlefield in France over 70 years ago, he thought his life was about to be cut short.

Although he made it out alive, it was without many who fought alongside him in the Army’s 103rd Infantry Division, the Boston Globe reported last week.

On Wednesday, he wore his Bronze Star and Purple Heart as the French consul general in Boston announced the 96-year-old had been deemed a knight of the Legion of Honor, which was considered the highest French decoration.

“You are a true hero for the United States, but you are also a hero for us, the French people,” stated Arnaud Mentré, the consul general, during the ceremony in Cambridge. “It was one of the darkest hours of my country.”

In a social media post, the Consulate of France in Boston shared photos of Maser receiving the honor.

“We are so grateful for your bravery in freeing France & Europe from tyranny – An extraordinary career both in the military & later as a civilian,” the post read:

In a very moving ceremony, CG @ArnaudMentre awarded 96 years old WWII veteran Clark Maser w/ the Legion of Honor. 🇷🎖️🇺🇸 We are so grateful for your bravery in freeing France & Europe from tyranny – An extraordinary career both in the military & later as a civilian #LestWeForget pic.twitter.com/b3cxk7lhGS

Maser spent many years working as a lawyer in California, and in his spare time, he participated in community and civic causes. But the month and a half Maser spent in France was what changed him the most.

“It was a good time to serve one’s country,” noted Maser, who enlisted to serve his country on the day he turned 18. “I never realized I would end up here.”

Maser became his company’s interpreter thanks to having studied a little French, and was also a company messenger because he ran the quarter-mile as a high schooler.

But the position almost got him killed due to intense mortar fire in Alsace. During his last mission as a courier, shrapnel hit both legs.

Although Maser was later put on a transport ship returning home and discharged as disabled, he continued living life to the fullest.

After the recent ceremony, a grateful Maser humbly accepted the congratulations poured upon him.

“I was lucky,” Maser commented, adding, “Now, I’m just trying to live out my life the best I can.”