The fallout from Will Smith physically assaulting Chris Rock at the Oscars will impact more than just Smith’s Hollywood career. Corporate partners who have allied themselves with Smith and his charitable foundation now face brand safety concerns over the actor’s newly toxic public image.

Breitbart News reached out to companies including Lyft, Spotify, and Paramount, which have hitched their wagons to the foundation created by Will Smith and his wife, Jada Pinkett Smith. The Obama Foundation is also a partner of the charity, known as the Will & Jada Smith Family Foundation.

In addition, Will Smith recently teamed up with Adidas to create a line of footwear inspired by the series The Fresh Prince of Bel-Air.

None of the companies would comment on whether or not they will cut ties with Smith and his family, even though at least three of them haven’t been shy in the recent past about voicing their positions on controversial political and social issues.

In the weeks ahead, these brands must decide if they want to continue their association with Smith and his charity, now that the actor has become radioactive following his onstage attack of Chris Rock during the recent Oscars telecast.

The motion picture Academy has condemned the assault and is considerinng disciplinary action, which could include Smith’s expulsion from the prestigious organization.

“We are upset and outraged that those moments were overshadowed by the unacceptable and harmful behavior on stage by a nominee,” Academy leaders said in a statement. “To be clear, we condemn Mr. Smith’s actions that transpired Sunday night.” 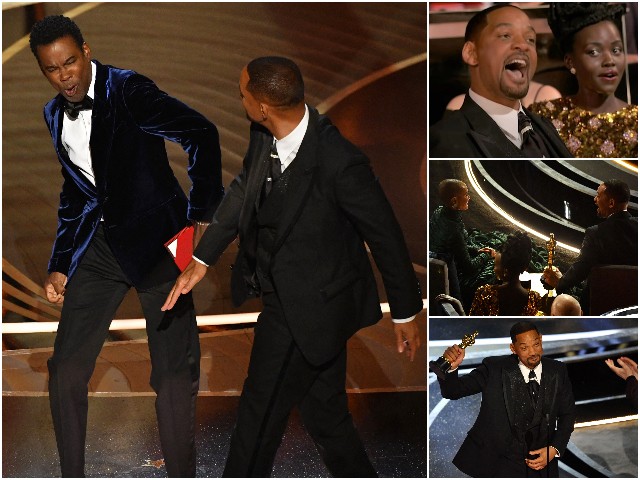 Will Smith attacked Chris Rock during the live Academy Awards Broadcast. Smith shouted “keep my wife’s name out your fucking mouth.” Smith was allowed to stay at the ceremony, won Best Picture, and delivered a six-minute speech, in which he didn’t apologize to Rock. (Robyn Beck/Getty Images/ABC)

Smith’s peers in Hollywood are also cautiously distancing themselves from the star after giving him a standing ovation on Sunday for his King Richard Oscar win. Celebrities including Jim Carrey, Ron Howard and Oscars co-host Wanda Sykes have publicly spoken out against Smith’s actions.

Publicly available tax documents show Smith’s family foundation is primarily funded by money from a trust that is apparently controlled by the couple, who has put in an average of $1.6 million each year for the last three years. The charity handed out close to $800,000 in donations to various causes in 2019, including the Academy Foundation, which is a division of the motion picture Academy.

The Smith family foundation was created in 1996 with the goal of making the world “better because we touched it.”

Lyft currently partners with Smith’s foundation to provide ride share credits for “underserved communities” in Newark, Los Angeles, and Flint, Michigan. Paramount, Spotify, and the Sundance Institute work with the foundation on its “arts and education” initiative for minorities, as does the Obama Foundation.

Corporations are notoriously risk-averse when it comes to protecting their brand from bad publicity. Some of the same companies that still support Smith’s foundation have previously caved to the woke mob by publicly taking political and social stances.

Spotify recently apologized for its handling of the Joe Rogan controversy after the mainstream media and left-wing activists launched a pressure campaign attempting to get Spotify to deplatform the massively popular “Joe Rogan Experience.”

Spotify even pledged to spend $100 million  to promote diversity, though it continues to host Rogan’s podcast.

In 2020, Paramount’s parent company caved to the “defund the police” movement by cancelling the long-running series Cops, which had most recently aired on the Paramount Network.

The same year, Adidas issued a statement in which it publicly supported Black Lives Matter, saying “remaining silent is not a neutral position.”