“Watch the Water” Is COVID-19 Being Spread Through the Water Supply Using Snake Venom? (WATCH)


Dr. Bryan Ardis sat down with radio host Stew Peters in a stunning interview to discuss Covid-19, Remdesivir, “venom theory,” and much more.

Conspiracy theorists Stew Peters & Bryan Ardis allege that COVID-19 is actually a synthesized form of snake venom that is being spread via drinking water and vaccines as part of a plot by the Catholic Church to turn everyone into “a hybrid of Satan.” https://t.co/X9Yj1l8IAU pic.twitter.com/ReNabRDBI2

Satan’s DNA is trending because a YouTube “documentary” named after the QAnon catchphrase “Watch the Water” is blowing up among antivaxxers.

The documentary claims snake venom and magnets were put in the COVID vaccine to give us Satan’s DNA.

It is even more insane than usual. pic.twitter.com/phIsnD6s3p

I just woke up to the new conspiracy theory that snake venom in water is what causes covid.

Plot hole: people in the country are on wells and got covid, too.

Posted online Monday, the nearly hour-long conversation between Peters and the doctor exposed an important topic that receives little attention.

Essentially, after realizing how odd it was that antivenom medicines like monoclonal antibodies were effectively treating Covid, Dr. Ardis began questioning the narrative that the virus originated from a bat in a Chinese wet market.

“Is Covid a venom, and this is why they don’t want you using monoclonal antibodies?” Dr. Ardis asked.

To answer this question, Dr. Ardis sought out establishment media “fact-checkers” to see if they were attempting to discredit any claims that the source of Covid-19 was a snake and not a bat.

A quick internet search reveals plenty of mainstream media publications admitting at the onset of the Covid outbreak that it may have been derived from snakes. 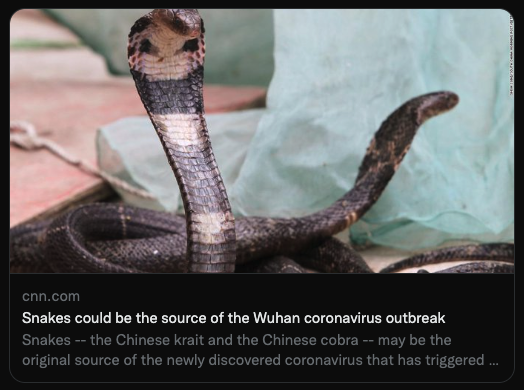 “Every time the snake is mentioned, fact-checkers 1,2,3,4,5,6 constantly fact-check it and spin it to the bats. There is no fact-checking about bats. They keep letting you look at bats,” Dr. Ardis said.

The doctor also claimed that Chinese scientists dismissed the bat theory at the beginning of the Covid outbreak because the type of bats the virus allegedly came from were hibernating at the time.

A 2021 study also connected the Chinese Krait and King Cobra to the Covid-19 spike protein, stating:

Later during the interview, Dr. Ardis touched on the fact that hydroxychloroquine, defamed by the media, has been known to block nicotine receptors in the brainstem from being injured by cobra and viper venom.

Meanwhile, Remdesivir, the drug touted by the medical and media establishments and the only drug approved for human use against Covid in the US, looks shockingly similar to snake venom when stored for medical use.

Under the Emergency Use Authorization for Remdesivir, Dr. Ardis explained that every patient must have their prothrombin time (a measurement judging how long it takes for a clot to form in a blood sample) tested before and during treatment because their blood could start to clot.

Both Remdesivir and King Cobra venom increase prothrombin time in test subjects, and as the doctor noted, a 2021 University of Arizona study examining blood samples from hundreds of people who died after being treated with Remdesivir found the drug raced through their bodies “like venom.”

In the interview, Dr. Ardis theorized the public drinking water supply may be contaminated to spread snake venom to the public.

The theory came after the CDC announced wastewater surveillance is being used to provide an “early warning of COVID-19’s spread in communities.”

“That is completely backwards,” Dr. Ardis said. “If a community has had SARS-CoV-2 go through their body, they already had their symptoms. When they eliminated the virus, supposedly the virus, and it ends up in your wastewater, they no longer have symptoms.”

“They are using the waters systems because they can target certain demographics,” he continued before telling Peters he doesn’t think the people working at local water plants are in on the scheme.

To summarize his theory, Dr. Ardis stated: “They are using Krait venom and Cobra venom, calling it Covid-19, you’re drinking it, it’s getting into your brainstem and it’s paralyzing your diaphragm’s ability to breathe.”

Dr. Ardis touched on the religious angle of a snake’s genes being isolated and then inserted into human DNA around the globe.

“I think this is the plan all along, was to get the serpent’s… the evil one’s DNA into your God-created DNA and they figured out a way to do it through this mRNA technology,” he stated. “They are using mRNA, I believe extracted from the King Cobra venom. I think they want to get that venom inside you and make you a hybrid of Satan, no longer just belonging to God or a creation of God’s.”

Is our water supply being poisoned and causing us to drink this toxin?

Are we ingesting a poison that mimics a respiratory infection?

Was this a demonic plot to use mRNA technology to insert snake venom into the global population?

Has Dr. Ardis gone off the rails with this theory?

WATCH via Rumble and share your thoughts in the comments: