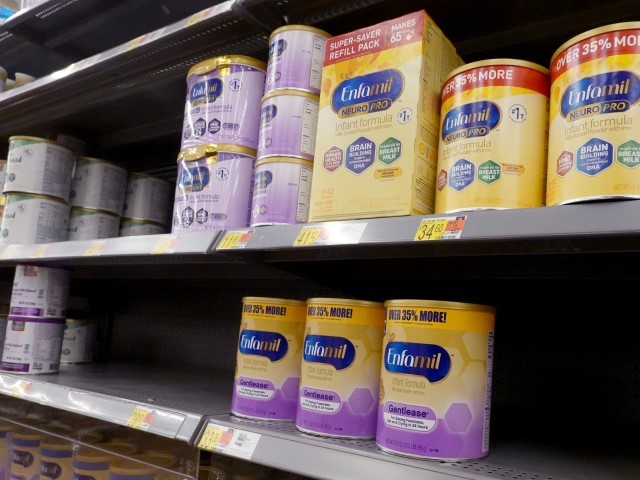 A shortage of baby formula due to supply chain issues has reportedly caused retailers, including Walgreens, to ration it as supplies run low.

The company – the second-largest pharmacy store chain in the United States behind CVS – said Friday that amid the supply-chain crunch, it is limiting customers to three infant and toddler formula product purchases at a time, at its 9,021 US locations.

A company spokesperson told DailyMail.com that the restrictions, already in effect, stem from an ‘increased demand and various supplier issues,’ as it was revealed that 29 percent of all top-selling formulas are out of stock at stores across the nation.

In August, a survey found approximately eight percent of Americans who responded noted they “sometimes” or “often” did not have enough food:

The number climbed to ten percent by early February, with thirteen percent of households with children reporting they either “sometimes” or “often” did not have enough to eat.

Inflation has sent the Consumer Price Index up a whopping 7.9 percent over the past year — “the largest 12-month increase since the period ending July 1981,” the Bureau of Labor Statistics said in its February report, released March 10.

“You know who pays the most from Joe Biden’s inflation? It is lower and middle-income families,” Scalise explained. “They are getting crushed by these higher prices. You go to the grocery store, and everything is 20-30% higher.”

“Fertilizer is 300% higher or more when you talk to farmers. That’s ultimately going to lead to even higher prices. And then Joe Biden, by the way, proposed $45 billion in new taxes on oil and gas,” he added.

Per the Mail report, the shortage was blamed on “pandemic-related supply chain issues” resulting in a massive backlog of items such as toys, clothing, and vehicles.