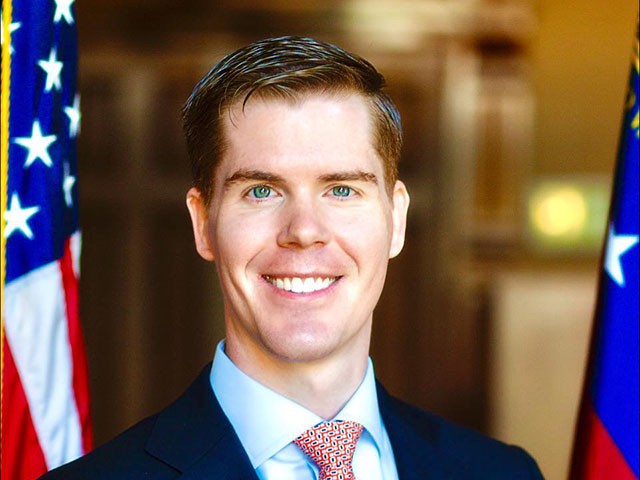 Evans opened an interview with Breitbart News Saturday host Matthew Boyle by talking about the energy his campaign has seen since Trump’s endorsement.

“Well, we are surging and have continued to be surging, really, for the past month, though President Trump’s endorsement catapulted us forward. And he has really pushed us on a strong trajectory we feel great about,” Evans said.

According to Evans, voters want to get back to an America first agenda, which includes energy independence, strong support for law enforcement, and a low unemployment rate.

“And so that’s what my campaign has been all about since the very beginning. And President Trump’s endorsement provided the affirmation of that,” Evan said.

Evans is confident that he’ll surpass the 50 percent threshold needed on Tuesday to avoid a runoff election.

Evans, who has multiple family members in law enforcement, talked about the need for communities to throw their total support behind law enforcement officers.

“We’re seeing record crime against our police officers. I think we’ve got too many emboldened criminals that are not respecting our law enforcement,” Evan said.

“And so we have to, as a community, 100% support our law enforcement. They put their lives on the line every day, they put their livelihoods on the line, because you’ve got the woke mob who are accusing them of things, which are based upon racism, which isn’t, which isn’t factually accurate,” he said. “And so we’ve got to make sure they’ve got the resources they need. We’ve got to make sure they’ve got the moral support they need. And we’ve got to enforce our law.”

The conversation switched gears when Boyle asked Evans what he would do to address the current baby formula shortage and ongoing supply chain crisis.

Evans called out the baby formula shortage as another example of President Joe Biden’s “incompetence” that has been on display “one day after another.”

Evans also said our politicians need to be focused on America first, rather than addressing issues abroad.

“And we’ve got to get back to putting America first,” Evans said. “I mean, the liberals seem to be more focused on Ukraine over in Europe than they are actually here at home domestically, making sure that we can actually feed our babies, and we need to make sure American manufacturing returns back to America.”

Evans said offshoring manufacturing jobs makes us dependent on foreign powers, which “compromises our ability to defend ourselves.”

Evans criticized Congress for passing a $40 billion Ukrainian aid package before focusing “on the big issues we have faced in the United States.”

America can’t be the national policeman forever. We have carried an inordinate burden for far too long across the globe. I think too many countries just say, “Oh, we’re not going to intervene here, we’re just going to hope that the United States will do it again.” And if you look at over these forever wars that have been going on, it has only hurt America, we are left holding the bag almost every single time.

Boyle asked Evans about the crisis at our southern border, and Evans called out the Democrats for opening the border and trying to soften our nation’s election laws.

Well, every time Democrats get control, they do two things. First, they open the border. And second, they try to initiate election reform. And that’s exactly what Joe Biden did. And they do it because they think that the folks coming across the border will get dependent on government entitlements. And as a result, they will vote Democrat. They also try to soften our election rules and erode away our election integrity. If you look at 2000 Mules, that shows you exactly why Democrats are engaged, and in my opinion, orchestrated ballot harvesting, in order to manipulate our elections.

According to Evans, “Every town across the United States is a border town,” due to the negative impact of unfettered fentanyl flowing through the border.

“You know, the supreme irony is the Democrats want to build a wall around the Capitol. But they say that walls don’t work on the southern border,” Evans said.

To conclude the interview, Evans called out the Chinese Communist Party for engaging in “industrial espionage,” and “debt diplomacy” in an attempt to become the global superpower.

“China fully intends to become the global hegemon, the most powerful country on the planet Earth by 2049, which is their 100 year anniversary. And they’re trying to do it without firing a bullet,” Evans said.

He also recognized China as “the largest existential threat on the United States of America.”

“They are the largest existential threat on the United States of America. And if we do not have strong leadership, which it creates fear in our enemies across the globe, we will lose this global war,” Evans concluded.