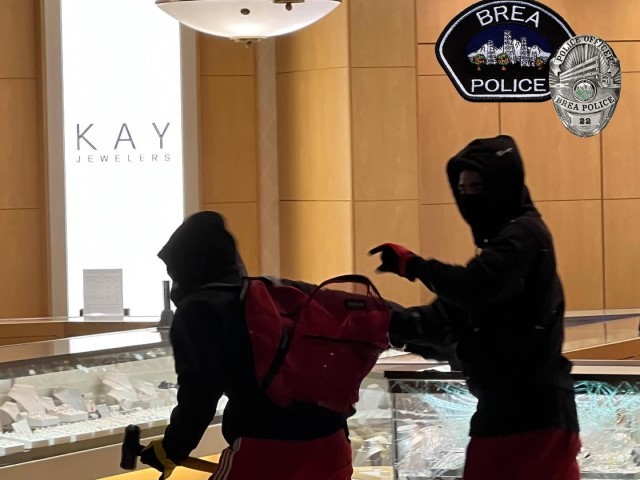 Police in southern California are looking for a pair of suspects they say used hammers to carry out a smash-and-grab robbery at a Kay Jewelers Friday night.

The robbery occurred at the Kay Jewelers at the Brea Mall in Brea – situated southeast of Los Angeles and north of Anaheim – just before 7:00 p.m., the city’s police department said. Police said the duo broke open the glass display cases using hammers and made off with merchandise, including gold chains, from inside the displays, the City News Service (CNS) reported.

“The suspects fled the scene following the robbery,” CNS noted. “They were seen sprinting out of the mall into a black Lexus vehicle.”

Police said no one was injured.

The Brea Police Department (BPD) describes the two suspects as black males who are either in their late teens or early twenties, standing approximately between 5’9″ and 6′ tall, and weighing around 170 to 180 pounds. They wore red sweats, hoodies, and face masks during Friday’s smash-and-grab, police said.

Multiple witnesses informed the BPD that they initially mistook the violent smashing of glass for gunshots ringing out.

One woman, Kiera Badillo, told KNBC she had her three-month-old son in a stroller when the chaos broke out and worried that a panicked crowd, mistaking the glass breaking for gunshots, would trample her infant.

Another woman named Debbie told the outlet she had brought her young son to the mall for pictures with the Easter Bunny when the robbery happened.

“I was just like, ‘If there was a shooting, it could have been me, and he’s not going to have me anymore,’” she told KNBC. “It’s just scary.”

#BREAKING #BeverlyHills: Owner of Luxury Jewels of Beverly Hills tells me the smash and grabbers got away with 3 to 5 million in stolen watches and necklaces pic.twitter.com/3W4zsaVXjX