This week, Biden officials said the administration has plans to end the Center for Disease Control and Prevention’s (CDC) Title 42 order that gives federal immigration agents broad authority to quickly return border crossers and illegal aliens to their native countries.

As a result, Biden officials are readily admitting that about half a million border crossers and illegal aliens are expected to show up at the United States-Mexico border every month. This is the equivalent of a population the size of Atlanta, Georgia, arriving at the border over the course of just 28 to 30 days. 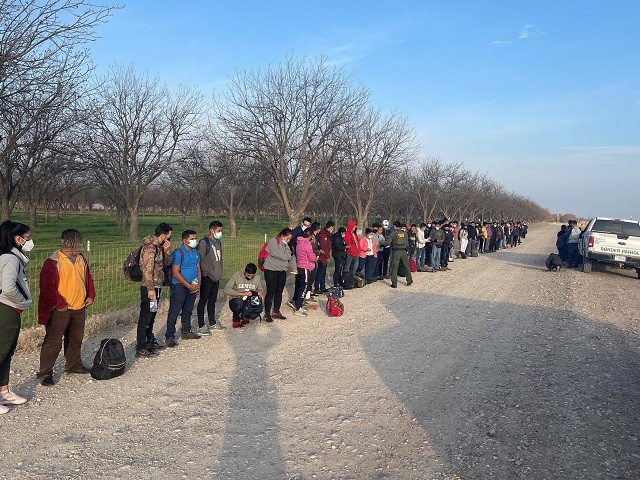 Now, a growing number of swing-state Democrats are asking Biden not to end Title 42.

Sen. Joe Manchin (D-WV), facing re-election in 2024, wrote in a letter to Biden this week that the administration should preserve Title 42 to stave off a massive influx of illegal immigration.

“Now is not the time to throw caution to the wind. I urge you to again renew this commonsense policy that has been in effect — under both Republican and Democratic administrations — since March 2020,” Manchin wrote:

In Fiscal Year 2021, encounters with migrants reached an all-time high of 1.7 million people. That is four times higher than the 400,000 encounters reported the previous year, and we are on pace to set a new record again this year. [Emphasis added]

Through the first five months of FY22, the Department of Homeland Security reports that Customs and Border Patrol has experienced more than 838,000 migrant encounters. Unfortunately, due to annual migration patterns, those numbers are only expected to increase during the upcoming spring and summer months. [Emphasis added]

Likewise, Sen. Maggie Hassan (D-NH) wrote in a statement that she is “concerned” that the Biden administration does not have “a sufficient plan in place to address the steep increase in border crossings that could result from” ending Title 42.

“This preemptive repeal [Title 42] threatens border security at a time when the administration should be focused on strengthening it,” Hassan said.

I am concerned that there is not a sufficient plan in place to address the steep increase in border crossings that could result from this reported decision. This preemptive repeal threatens border security at a time when the administration should be focused on strengthening it. https://t.co/9G8danIuwz

Manchin and Hassan’s statements come as the House Freedom Caucus is urging House Democrats to sign onto their discharge petition that would force a vote on Rep. Yvette Herrell’s (R-NM) legislation that would codify Title 42 into law until the federal government’s pandemic order is ended.

“We urge you to consider the dangerous impact rescission of the Title 42 order would have on our communities at this time,” Cuellar, Gonzalez, and Texas Republicans wrote in a letter.

In 2021, more than two million border crossers and illegal aliens arrived at the porous southern border — a foreign population larger than the resident population of Philadelphia, Pennsylvania. From January 2021 to August 2021, for example, more than half a million were released into the U.S. interior.

This year, experts predict more than 2.1 million will arrive. Hundreds of thousands are likely to be released into the U.S. interior as part of Biden’s expansive Catch and Release operation that buses and flies border crossers and illegal aliens to various American cities.