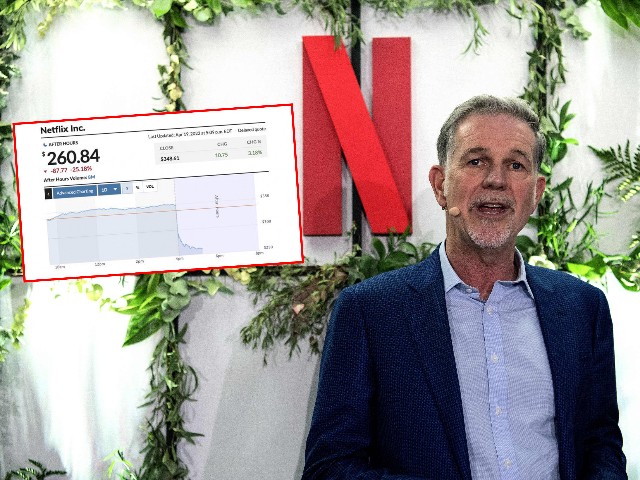 The fallout from Netflix’s first-quarter losses continued on Wednesday when the streaming giant’s shares closed down more than 35 percent. According to CNBC, the sharp drop “led to a wave of downgrades from Wall Street on fears over the company’s long-term growth potential,” resulting in a loss of more than $50 billion of its market cap.

Analysts with Bank of America, one of the nine Wall Street companies to downgrade the streaming platform, said the company’s current plans “reaccelerate growth” show a share of promise, they will likely have no “noticeable impact until ’24, a long time to wait on what is now a ‘show me story.’”

Analyst Jeffrey Wlodarczak with Pivotal also wrote on Tuesday that Netflix’s poor performance meant a reduction in “subscriber forecasts” and a substantial pushback in “profitability forecasts.”

“Our revenue growth has slowed considerably,” the company wrote. “Streaming is winning over linear, as we predicted, and Netflix titles are very popular globally. However, our relatively high household penetration — when including the large number of households sharing accounts — combined with competition, is creating revenue growth headwinds.”

That admission comes after it reportedly told shareholders the company’s subscriber base would grow by 2.5 million in the first quarter, with analysts predicting it closer to 2.7 million. The situation has become so dire that Netflix Co-CEO Reed Hastings said the platform may shift to offering “lower-priced, ad-supported tiers as a means to bring in new subscribers after years of resisting advertisements on the platform.”