An especially disturbing chapter of the report dealt with the harmful impact of Chinese fishing on West African nations, where entire coastal communities tremble on the verge of economic collapse thanks to China’s rapacious practices.

The report, titled The Ever-Widening Net: Mapping the Scale, Nature, and Corporate Structures of Illegal, Unreported, and Unregulated Fishing by the Chinese Distant-Water Fleet, accused China of creating a huge fleet to fish outside China’s own depleted waters.

This Chinese distant-water fleet (CDWF) employs “destructive practices such as bottom trawling and the use of forced, bonded and slave labor and trafficked crew” to steal huge harvests of fish from communities along the African coast.

The EJF blamed “a lack of transparency and the opacity of seafood supply chains, limited monitoring, control, and surveillance capacity, poor governance, and corruption” for enabling these practices to continue.

The report took a dim view of distant-water fleets in general but singled out China for its “size and global reach” and its penchant for overfishing in vulnerable regions like the African coast.

The most alarming case study for China’s practices was Ghana, where Chinese industrial fishing has so severely depleted stocks that Ghanian fishermen come home with empty boats and have little choice but to buy their own local fish back from Chinese corporations. This situation is so common that Ghanaians have a word for it: saiko.

China moved so aggressively into Ghana that EJF estimated almost 90 percent of the local trawler fleet is now controlled by Chinese corporations, operating through Ghanaian front companies. Ghana’s coastal canoe fishermen can hardly hope to compete with these trawlers; according to EJF, over 70 percent of the local fishermen say their living conditions have declined over the past five years, and half of them said they “have gone without sufficient food in the last year.” 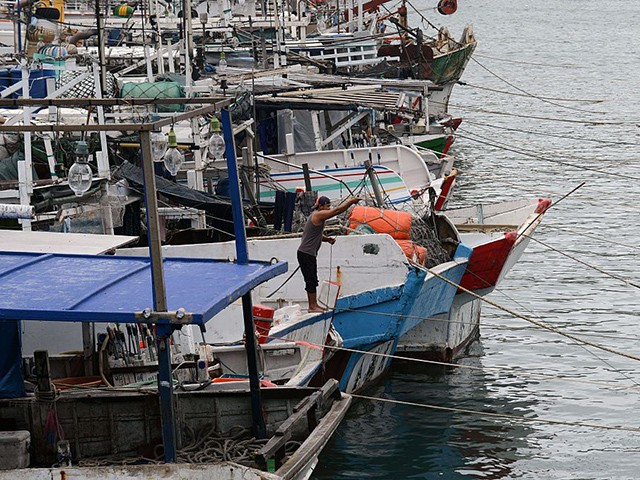 An Indonesian fish worker receives a bag from another boat at a local fishing port near the coastline of Keelung on September 28, 2015, as typhoon Dujuan approaches Taiwan. (Photo credit should read SAM YEH/AFP via Getty Images)

The report revealed that 70 percent of the canoe fishermen said their equipment has been damaged by close encounters with the trawlers. Some report being driven away from the trawlers with “threats and abuse.”

The report accused Chinese trawlers of deliberately targeting small fish populations close to shore and wiping them out by catching juvenile fish before they have a chance to reproduce. This leaves local communities with little choice but to engage in the saiko trade of buying frozen fish harvested by the Chinese in deeper waters, where the canoes cannot reach.

The impact of these activities on coastal communities is catastrophic. EJF noted that Ghanaian women, who usually handle the shore-side end of the canoe-fishing business, are turning to prostitution in growing numbers because the fishermen come home empty-handed.

The report noted that other human rights abuses by the CDWF are “becoming apparent” as the fleet is subjected to increased international scrutiny. In May 2021, U.S. Customs and Border Protection banned imports from China’s Dalian Ocean Fishing company because it was allegedly abusing Indonesian migrant workers aboard its vessels.

Aboard one especially notorious Chinese vessel, the Indonesian crew reported sharing one toilet between 22 men, having their passports confiscated, and being forced to eat “fish that was otherwise used as bait” chased down with “poorly treated saltwater.”

The Indonesians also said the Chinese crew beat them during a hellish voyage that lasted 13 months because the ship was able to transfer its catch and receive supplies at sea. Four of the Indonesian crew of this vessel died, one of them aboard the ship after the captain refused to return to port for medical care.

“Illegal fishing and overcapacity in the Ghanaian trawl sector is having catastrophic impacts on coastal communities across the country,” EJF CEO Max Schmid told Voice of America News (VOA) on Thursday.

The Ever-Widening Net concluded with a plea to the Chinese government to keep better track of its deep-water fleet’s activities, make the ownership of the vessels more transparent, and cooperate with international agencies on ecological and human rights issues. As VOA suggested, these pleas are likely to fall on deaf ears because Chinese officials and state media resolutely deny any sort of problem with their deep-water fleet or industrial fishing practices.

The EJF report offered some advice to local governments and national authorities as well, including a plethora of suggestions for stripping away the paperwork screen that China has constructed over its fishing fleet, enforcing license laws more strictly, and passing regulations against the use of destructive industrial fishing equipment. A system that would allow foreign and migrant CDWF crew members to safely and anonymously report abuses was also recommended.