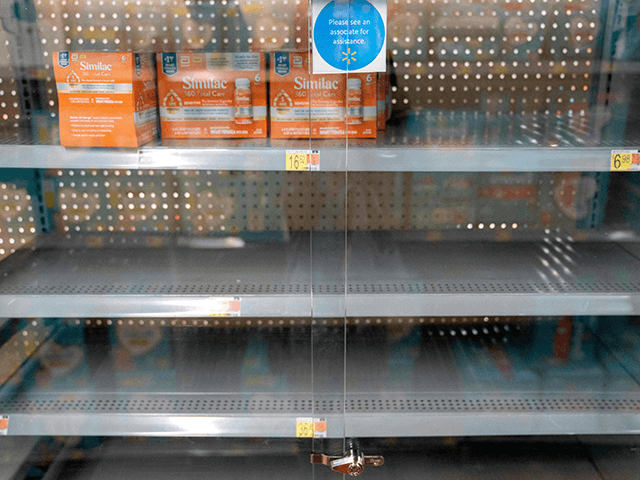 A local news outlet reported that parents in San Antonio, Texas, are struggling the most in the U.S. to get the formula their infants need, with 56 percent of retailers reporting empty shelves.

“The shelves have been completely empty of everything,” Clarissa Rubio, the mother of a 10-month-old son, Jude, who is on a special soy formula because of milk allergies, said in a San Antonio Express News’ article published on Sunday.

“I’ve gone to multiple stores around the city, and I’ve had to call up family outside the area, and in some cases outside the state,” Rubio said.

The Express News reported on data from a Datasembly, a retail data firm, which showed the out of stock (OOS) around the country, including the 56 percent statistic in San Antonio.

Across the country, the rate surged from 30 percent in early April to 43 percent during the week ending May 8.

Chain operators, such as CVS, Costco, Walmart and Walgreens, are restricting in-store and online purchases of formula. H-E-B, the largest grocery retailer in the San Antonio area, said it is limiting customers to two cans of formula per trip to the store.

But supermarket and drug stores aren’t the only ones having a hard time keeping baby formula on their shelves. The San Antonio Food Bank, which typically stocks baby formula along with baby food and other nutritious needs for mothers and infants, also has little of it on hand.

“We had, at one point, a semi-truckload of infant formula, and it’s gone now,” Eric Cooper, president and CEO of the food bank, said in the article. “We’re pretty much empty”

“Parents’ hunt for formula isn’t the food bank’s only challenge. In recent weeks, Cooper has seen a roughly 10 percent increase in people seeking assistance,” according to the report. “Many working San Antonians can’t keep up with rising inflation, which has relentlessly pushed up the price of groceries, gas and other necessities, and are reaching out to the food bank.

Abbott Nutrition, which has been shut down for months following an investigation into an outbreak of cronobacter infections in infants, announced on Monday it had reached an unspecified agreement with federal regulators to reopen its plant in Sturgis, Michigan.

Abbott Nutrition — maker of some of the most popular brands of baby formula, including Similac — said on Monday it had reached an agreement with federal regulators to reopen its Sturgis, Michigan, plant and begin making baby formula again.

Two infants died and Abbott recalled almost all of its formula products.

The Express News interviewed Rocio Martinez, a nurse who needs formula for her 7-month-old daughter.

“It’s honestly very scary thinking about this going on for the next few months,” Martinez said. “It’s just terrifying to not be able to have that hope that there may or may not be any formula anytime soon.”