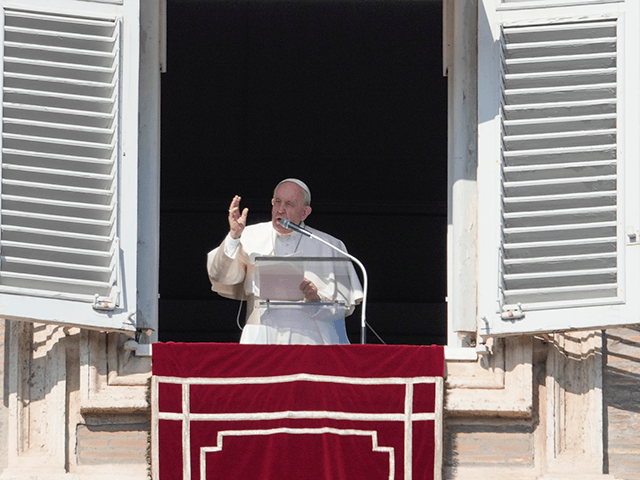 While never mentioning Putin by name, the pontiff referred to “some potentate, sadly caught up in anachronistic claims of nationalist interests” who is “provoking and fomenting conflicts,” an unmistakable reference to the Russian president.

In his address to Malta’s civil authorities on the first day of his visit to the island nation, Francis warned that “from the east of Europe, from the land of sunrise, the dark shadows of war have now spread.”

“We had thought that invasions of other countries, savage street fighting and atomic threats were grim memories of a distant past,” he declared. “However, the icy winds of war, which bring only death, destruction and hatred in their wake, have swept down powerfully upon the lives of many people and affected us all.”

“Now in the night of the war that is fallen upon humanity, please, let us not allow the dream of peace to fade!” he urged.

It is urgent “to restore beauty to the face of a humanity marred by war,” the pope asserted, suggesting that the “tender love of mothers” and the presence of women “are the true alternative to the baneful logic of power that leads to war.”

“We need compassion and care, not ideological and populist visions fueled by words of hatred and unconcerned for the concrete life of the people, ordinary people,” he said.

The pope went on to cite the Italian Catholic politician Georgio La Pira, who denounced over sixty years ago a “clash of interests and ideologies that shake a humanity in prey to incredible childishness.”

“Those were timely words; we can repeat them because they have a great relevance,” Francis said, once more decrying “the infantile and destructive aggression that threatens us, before the risk of an ‘enlarged Cold War’ that can stifle the life of entire peoples and generations.”

“That ‘childishness,’ sadly, has not disappeared. It has reemerged powerfully in the seductions of autocracy, new forms of imperialism, widespread aggressiveness, and the inability to build bridges and start from the poorest in our midst,” he asserted. “Today, it is difficult to think with the logic of peace. We have gotten used to thinking with the logic of war.”

War has “been prepared for some time by great investments in weaponry and a massive trade in arms,” Francis insisted. “It is distressing to see how the enthusiasm for peace, which emerged after the Second World War, has faded in these recent decades.”

“In this way, not only peace, but also so many great questions, like the fight against hunger and inequality are no longer on the list of the main political agendas,” he lamented.

May the enormous funds that continue to be destined to weaponry “be diverted to development, health care and nutrition,” he proposed.