Many more Americans are rejecting the “Nation of Immigrants” narrative amid the huge damage from President Joe Biden’s cheap-labor migration policy, according to Ipsos polling data.

Opposition to a border wall has dropped sharply from 65 percent in 2018 to 42 percent in 2022, says the Ipsos poll announced on August 18, which also showed that 54 percent of Americans view Biden’s easy-migration policy as like an “invasion.”

Public support for the much-touted “DACA” amnesty for former child migrants has dropped from 65 percent in 2018 to just 51 percent in 2022, according to the poll.

Just 26 percent of people “strongly” endorse the 1950s “Nation of Immigrants” narrative, down from 40 percent in 2018, the poll shows.

Overall “strongly and “somewhat” support for the claim that “immigrants are an important part of our American identity” has plunged from 75 percent to just 56 percent in four years, as Biden’s deputies smuggle roughly 3 million low-wage migrants into Americans’ workplaces, schools, and neighborhoods.

Nonetheless, the large decline in support for migration has not been crystalized into a matching gain for pro-American migration policies.

That gain could happen if GOP politicians — perhaps former President Donald Trump — stare down their big-money donors and begin to offer a coherent and consistent pocketbook pitch for lower migration, higher wages, and lower rents. 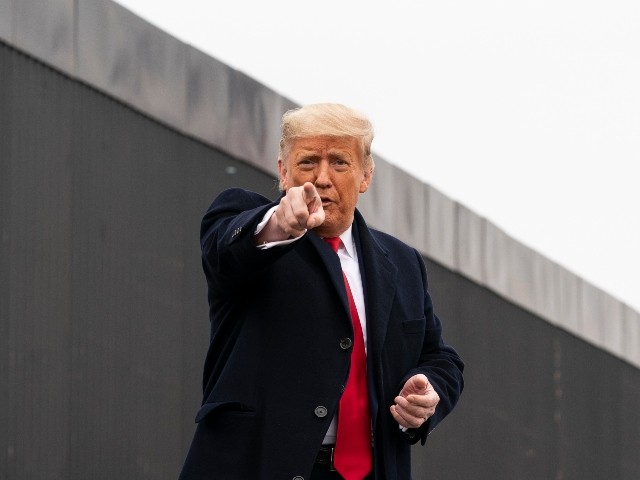 President Donald Trump points to a member of the audience after speaking near a section of the U.S.-Mexico border wall, Tuesday, Jan. 12, 2021, in Alamo, Texas. (AP Photo/Alex Brandon)

Under Biden, “What you see is a shift in the whole spectrum of opinion on immigration,” said Mark Krikorian, the director of the Center for Immigration Studies: 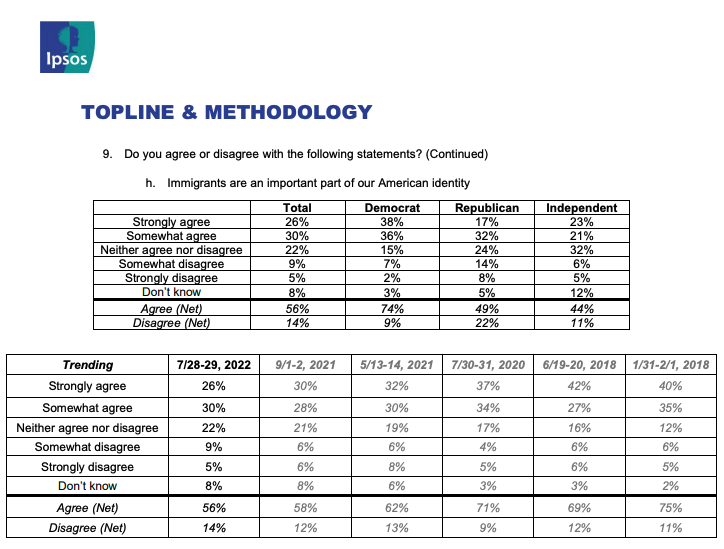 Ipsos’ polling echoes the shift described by other pollsters.

In July, a 35 percent plurality in a YouGov poll said immigration makes the United States “worse off,” while 31 percent said immigration makes the U.S. “better off.” In a YouGov poll from September 2019, the “worse off” number was just 19 percent, and the “better off” number was 43 percent. That adds up to a 28-point shift in public opinion in three years. 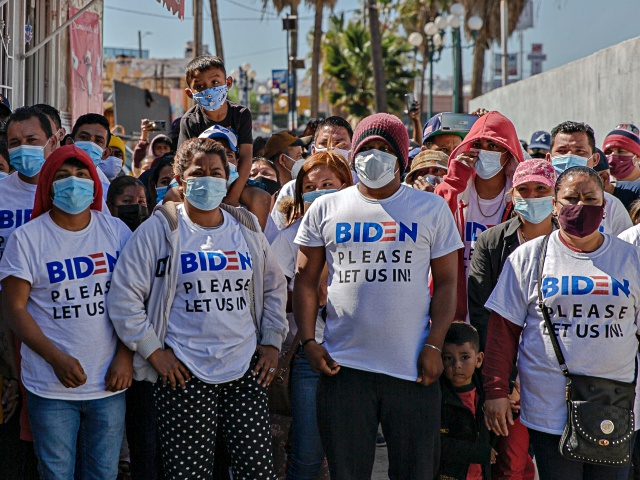 “Biden, please let us in,” reads in English on the T-shirts of a group of migrants from different backgrounds who made their way to the “El Chaparral” international border crossing. The migrants were asking the U.S. government for asylum. (Stringer/picture alliance via Getty Images)

In August, Gallup reported that the share of Americans who want less migration rose from 28 percent in May 2020 to 38 percent in July 2022. The share who want more migration dropped from 34 percent to 27 percent.

Politicians and writers have long predicted a shift against migration if the federal government fails to keep control of the borders, Krikorian said:

If your goal is to bolster the current legal immigration, you should be alarmed at what this administration is doing because it is laying the groundwork for serious [popular] restrictions on immigration,” Krikorian said, adding:

Warning the Biden administration about this goes against my interests because I want a reduction in immigration. I’d like to have them as part of reasoned public debate, but we might end up getting them just as a backlash against the anti-border crowd’s overreach.

The opinion shift is likely larger than admitted by the donors, politicians, or especially the pollsters who face strong pressure from business clients to not reveal pro-American views. For example, Ipsos posted a note on August 19, which ignored Biden’s policy and economics, and instead blamed public attitudes for public attitudes:

As the midterms approach, the misinformation and the heated political rhetoric surrounding immigration seem to be resonating with the public.

But why is that? How did we get here? In short, populism and the persistent feeling many Americans have that the system is broken are creating the political ingredients that drive some of this sentiment.

Immigration is a culture war topic that brings out some of our most divisive rhetoric and tendencies. Populism and nativism are the cultural currents framing this topic and this moment. This is not new in American politics.

Americans deal with tremendous pressure from the establishment — including the TV networks — to ignore or welcome the inflow of replacement workers, consumers, and renters.

For example, the Ipsos poll showed that only 48 percent of all respondents — and 38 percent of Democrats — understood that “the number of migrant apprehensions at the southern border was higher in 2021 than ever before.”

But many polls show that Americans will admit greater opposition to migration if the pollsters use a proxy issue to gauge their views.

An April 2021 survey by a pro-migration business group asked 2,200 Americans about the coronavirus and migration, saying, “Based on what you know, do you think immigrants help or hurt the United States’ long-term economic recovery to COVID-19?” Just 23 percent said immigrants help, while 40 percent said they hurt.

Similarly, in August, YouGov also asked Americans if they want a “pause” in migration. That question lets Americans answer without committing to final opposition against the establishment narrative. YouGov’s July poll shows 42 percent support for a “pause,” up from 37 percent in June 2020.

Also, poll questions that remind respondents about pocketbook issues tend to show more opposition than questions about the establishment’s “Nation of Immigrants” narrative. So YouGov’s August question –“When jobs are scarce, employers should prioritize hiring people of this country over immigrants” — shows a 48 percent agreement. That is six points above the “pause” number.

Also, political leaders can break through the establishment’s “Nation of Immigrants” narrative to win elections.

In 2016, Trump spoke out for American solidarity and many subsequent polls showed a sudden rise in the public’s willingness to speak out in favor of themselves and their fellow citizens. Breitbart News reported on an Ipsos poll from September 2016:

Sixty-seven percent of respondents support, and only 9 percent strongly oppose, the implementation of current laws that levy fines on employers who hired illegals instead of Americans. Those laws were largely ignored by President Barack Obama and President George W. Bush

Nearly all GOP and Democratic politicians are under tremendous donor pressure to stay silent about the pocketbook damage of migration, or the cost of lives and economic chaos.

Many Democrats seem confident that GOP candidates will remain mute on migration in elections, despite the political opportunity.

There is good evidence for the Democrats’ confidence. For example, the Twitter account run by Rep Lee Zeldin (R-NY) — the GOP’s losing gubernatorial candidate in New York state — says little or nothing about Biden’s flood 0f migrant workers and renters into workplaces and housing throughout New York.

It is easier for government officials to grow the economy by immigration than to grow exports, productivity, or the birth rate.

So the government deliberately extracts millions of migrants from poor countries and uses them as workers, renters, and consumers.

This Extraction Migration policy skews the national economy. It shifts vast wealth from ordinary people to investors, billionaires, and Wall Street. It makes it difficult for ordinary Americans to advance in their careers, get married, raise families, or buy homes.

This migration policy also reduces exports by minimizing shareholder pressure on U.S. companies to build up beneficial and complementary trade with people in poor countries.

Migration undermines employees’ workplace rights, and it widens the regional wealth gaps between the Democrats’ big coastal states and the Republicans’ heartland and southern states.

This economic strategy is enthusiastically pushed by progressives who wish to transform the U.S. from a society governed by European-origin civic culture into a progressive-directed empire of competitive, resentful identity groups. “We’re trying to become the first multiracial, multi-ethnic superpower in the world,” Rep. Rohit Khanna (D-CA) told the New York Times in March 2022. “It will be an extraordinary achievement … We will ultimately triumph,” he boasted.

But the progressives’ colonialism-like economic strategy kills many migrants. It exploits the poverty of migrants and splits foreign families as it extracts human resources from poor home countries to serve wealthy U.S. investors.

Progressives hide this Extraction Migration economic policy behind a wide variety of noble-sounding explanations and theatrical border security programs. Progressives claim that the U.S. is a “Nation of Immigrants,” that migration helps migrants, and that the state must renew itself by replacing populations.

Many polls show the public wants to welcome some immigration. But the polls also show deep and broad public opposition to labor migration and the inflow of temporary contract workers into jobs needed by young U.S. graduates.

This “Third Rail” opposition is growing, anti-establishment, multiracial, cross-sex, non-racist, class-based,  bipartisan, rational, persistent, and recognizes the solidarity that American citizens owe to one another.