The last-minute surge of outsider candidate Rodolfo Hernández in the Colombian presidential race suggest he could leap into second place in Sunday’s election, guaranteeing a place in a runoff, likely against far-left candidate Gustavo Petro.

Latest polls suggest Hernández could overtake conservative establishment candidate Federico “Fico” Gutierrez and would be technically tied in a hypothetical runoff scenario against Petro, a former member of the leftist M-19 guerrilla and ex-mayor of the nation’s capital, Bogotá.

On May 29, more than 38 million Colombians will be able to cast their vote to determine who will succeed Iván Duque as Colombia’s president for the next four years. Only six of the original ten candidates remain in the race, of which three have a chance at winning the election, according to most polls. 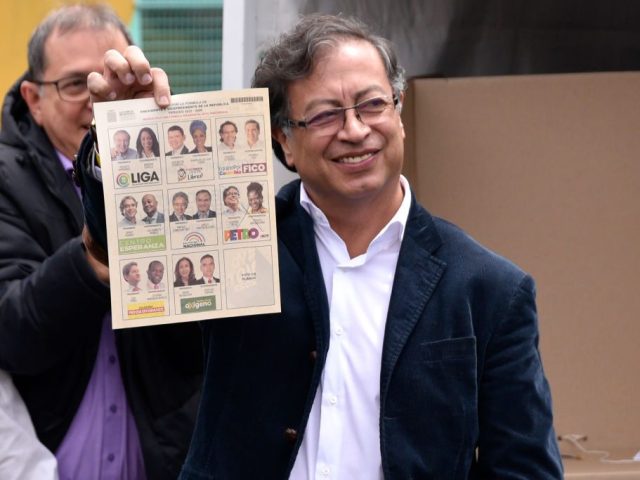 Presidential candidate Gustavo Petro of Pacto Historico shows his vote during the presidential election day on May 29, 2022 in Bogota, Colombia. (Photo by Guillermo Legaria/Getty Images)

As neither candidate is projected to obtain the 50-percent-plus-one vote required to become president, a runoff election between the two most voted candidates will take place on Sunday, June 19.

The data from the May 20 Invamer poll shows a technical tie between Petro and Hernández should a hypothetical runoff between these two takes place, with Petro having 50 percent support against Hernandez’s 47.4 percent.

In contrast, under a Petro versus Gutiérrez runoff, Petro would have 52.7 percent and Federico Gutierrez would have 44.2 percent support.

Colombian law forbids holding political campaign events and the publication of any new polling data during the week prior to an election.

Hernández, whom CNN has deemed the “Colombian Donald Trump” due to his populist language and for his use of “bad and explicit words” – even as he shares no similar policy or ideological leanings – is a 77-year-old engineer and construction businessman. 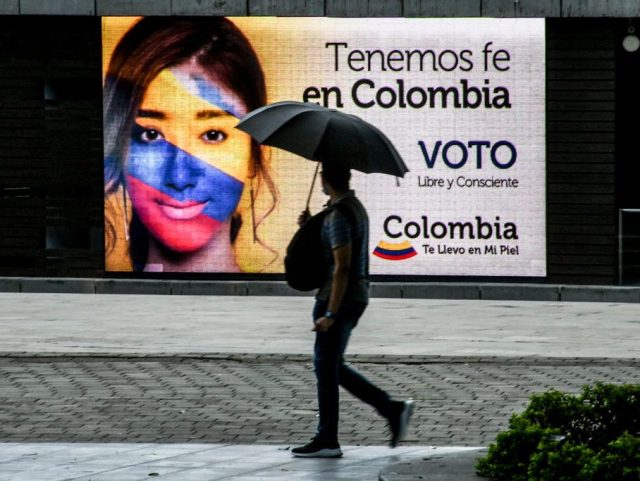 A man walks past a billboard that reads We have Faith in Colombia. Free and concious vote, in Medellin, Colombia, on May 28, 2022 (JOAQUIN SARMIENTO/AFP via Getty Images)

He is running under the Liga de Gobernantes Anticorrupción (“League of Anti-Corruption Governors”) coalition and, just as his coalition’s name would suggest, has run his anti-establishment campaign on the basis of fighting corruption, despite facing his own accusations of inappropriate dealings.

Hernández was the former mayor of the city of Bucaramanga between 2016 and 2019. Hernández resigned three months before his term ended alleging political persecution over a conflict of interest investigation against him. Opponents accused him of having inappropriately changed the functions manual of the mayor’s office.

Hernández has been the center of controversies in the past, such as having slapped a councilman in 2018 during a heated discussion and mixing up the names of Adolf Hitler and Albert Einstein in a 2016 radio interview when he was quoting the latter, for which he issued a public apology.

Some of his campaign promises include reducing Colombia’s current value-added tax from 19 to ten percent, somehow bringing down school dropout rates to zero, issuing a minimum universal income for Colombia’s elderly who do not qualify for a pension, and starting a program to build child care spaces for working mothers. He’s also promised that he’d turn the presidential palace into a museum and sell most of the aircraft and cars used by government officials.

When it comes to foreign policy Hernández said that, if elected, he would instantly reestablish consular relations with the neighboring socialist regime of Nicolás Maduro, which have been broken since early 2019 as a result of Venezuela’s presidential crisis. 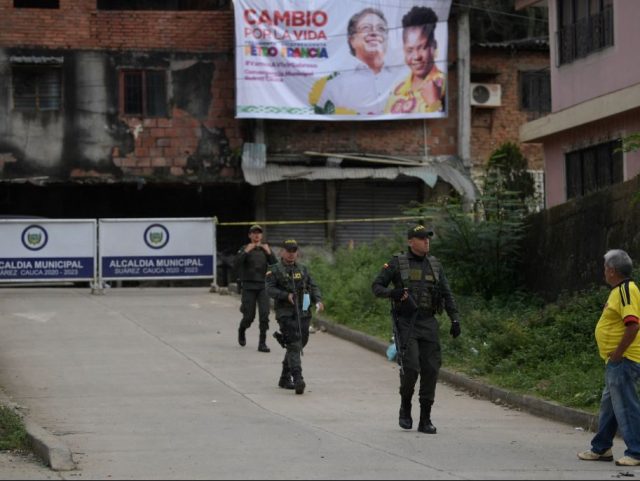 Police officers patrol the streets of Suarez, Cauca Department, Colombia, where the Colombian vice-presidential candidate for the Historic Pact coalition, Francia Marquez, is expected to vote during the presidential election, on May 29, 2022 (RAUL ARBOLEDA/AFP via Getty Images).

Hernández claims he has self-financed his presidential campaign with 10 billion Colombian pesos (roughly $2.56 million) out of his own pocket.

“I do not receive money from anyone. I am 77 years old and I’ve worked 52 of them in pure and hard capitalism, which is working in the sun and in the rain,” he said in an interview.

By April 2022, Hernández had displaced centrist candidate Serjio Fajardo out of the third position in the polls. Hernández recently stated that Fajardo sent three members of his campaign to discuss a possible alliance with him but that no agreement was signed in the end. Fajardo, who went from having 18.9 percent of support in November 2021 to only five percent in May 2022, remains in the race.

Federico “Fico” Gutiérrez, the establishment right candidate, has been unable to keep a steady momentum and raise his polling numbers despite his campaign counting with the support of former President Álvaro Uribe Vélez (2002-2010) after Óscar Iván Zuluaga, the candidate from Uribe’s party, withdrew from the race. 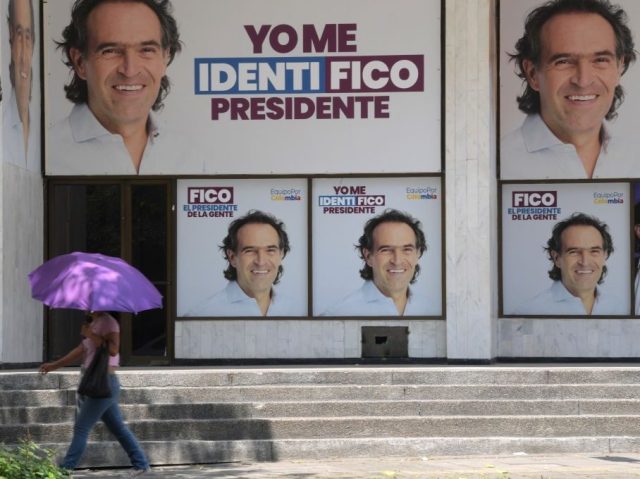 A woman walks near propaganda of Colombian presidential candidate for the Equipo Colombia coalition, Federico Gutierrez, in Cali, Colombia, on May 24, 2022. (RAUL ARBOLEDA/AFP via Getty Images)

His designation as the right-wing Equipo por Colombia (“Team for Colombia”) coalition candidate came only in March 2022 after he defeated four other candidates in the coalition’s primaries. Since then, he has been presented as the main candidate against the leftist coalition backing Gustavo Petro.

Gutiérrez, who as mayor of the city of Medellín counted with an extremely high popularity and approval rating, is a relatively less known figure nationwide. The candidate governed Medellín, once notorious as a hub of global cocaine trafficking, at the same time as Hernández governed Bucaramanga.

The unpopularity of current President Duque who, by February 2022 had a 71-percent disapproval rating, has had an effect on Gutiérrez’s campaign. Gutiérrez has not been too successful in sending the message that his prospective presidency would not be a continuation of Duque’s. Duque’s unpopularity is another factor that has benefited the campaigns of both Hernández’s anti-establishment outsider figure and Petro’s leftist promises of change.

The requirements for a runoff election should no candidate obtain 50 percent plus one of the votes during a Presidential election were introduced with Colombia’s 1991 constitutional reform. Since then, Uribe – who ran the country from 2002 to 2010 and previously also served as mayor of Medellín – has been the only candidate to have ever won a Colombian presidential election in the first round, with 53.05 percent of the votes in the 2002 election and with 62.35 percent of the votes during his 2006 reelection. 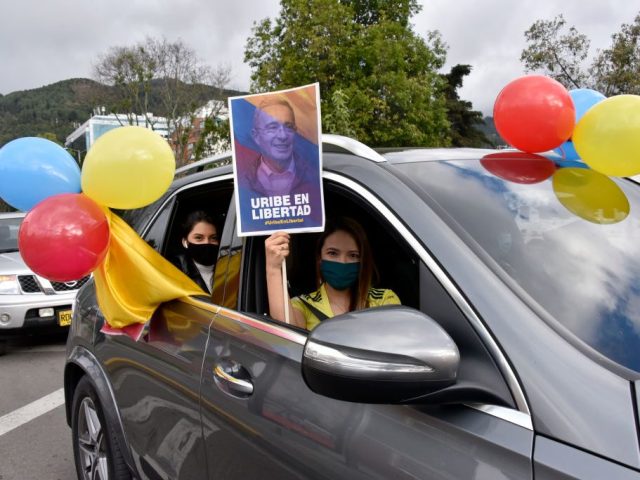 A supporter of former President Álvaro Uribe holds a banner with an image of him with a message that reads in Spanish: “Free Uribe” during a caravan in favor of ex-president of Colombia Alvaro Uribe Velez on August 07, 2020 in Bogota, Colombia. (Guillermo Legaria/Getty Images)

Since 2015, Colombia has had a one-term limit for presidents, a change some have said was made to prevent Uribe from running a third time.
Christian K. Caruzo is a Venezuelan writer and documents life under socialism. You can follow him on Twitter here.