Flanked by more than a dozen young female athletes, including his 14-year-old daughter Piper, Stitt signed the measure, dubbed the ” Save Women’s Sports Act.” 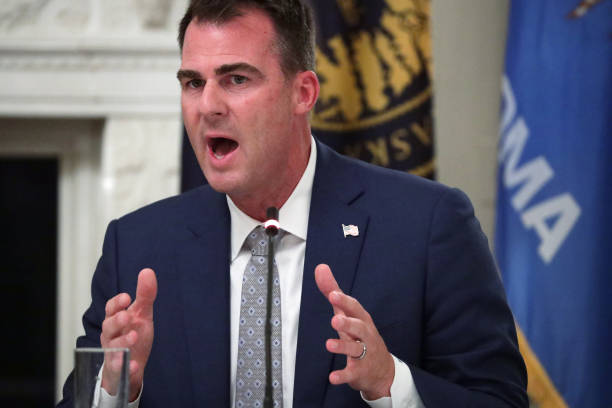 The bill, which easily passed the Republican-led House and Senate mostly along party lines, took effect immediately with the governor’s signature. It applies to female sports teams in both high school and college.

The new law was quickly panned by civil rights groups as unnecessarily targeting a group of people who already are marginalized.

“Transgender people belong everywhere, but with the swipe of a pen and a public display, Governor Stitt has sent a clear message to Oklahoma’s vulnerable transgender youth that they are not welcome or accepted in our state,” Tamya Cox-Toure, the executive director of the Oklahoma chapter of the American Civil Liberties Union. “Ultimately, SB2 violates the United States Constitution and federal civil rights law, puts Oklahoma at risk of losing federal funding, and harms transgender youth, all to solve a problem that does not exist.”

The state’s governing body for high school sports, the Oklahoma Secondary Schools Activity Association, has had a policy in place since 2015 addressing transgender athletes’ participation in sports, but OSSAA spokesman Van Shea Iven said no school has ever requested enforcement of the policy for a male student transitioning to female.

Outside the room where Stitt signed the bill, 26-year-old Cara Kleber, who is transgender, held a sign that read: “How does it feel bullying kids needing support?”

A similar bill did not advance last year, but several supporters of the measure said they were convinced to vote for it after University of Pennsylvania swimmer Lia Thomas, a trans woman, won a title earlier this month at the national NCAA Women’s Division I championship.

Some opponents had raised concerns about the NCAA pulling sports tournaments from Oklahoma, including the Women’s College World Series held each year in Oklahoma City, but Stitt said he wasn’t concerned.