North Korea announced on Sunday that its communist regime had tested an unnamed “new-type tactical guided weapon” intended to improve the “efficiency” of its nuclear weapons.

The exercises followed a threat from Kim Yo-jong, sister to communist dictator Kim Jong-un, this month that North Korea would consider a nuclear strike on its southern neighbor – a message apparently intended to intimidate incoming President-elect Yoon Suk-yeol.

In the past two months, North Korea has suddenly appeared to significantly increase its military development activities. In addition to the alleged new weapon advertised this weekend, Kim Jong-un appeared in state media at an event allegedly testing a new intercontinental ballistic missile (ICBM), which the government dubbed the “Hwasongpho-17,” and satellite images appear to show increased activity at the Punggye-ri Nuclear Test Site, which Pyongyang claimed to have permanently shut down in 2018.

The North Korean state newspaper Rodong Sinmun did not name the alleged new weapon but described it as being of “great significance” and claimed the testing of the product occurred “successfully.”

“The new-type tactical guided weapon system developed under special attention of the Party Central Committee is of great significance in drastically improving the firepower of the frontline long-range artillery units,” Rodong Sinmun alleged, “and enhancing the efficiency in the operation of tactical nukes of the DPRK and diversification of their firepower missions.”

The state newspaper claimed Kim Jong-un attended the weapons test to monitor the military’s prowess and published photos of the alleged “guided weapon system” and Kim happily observing its launch. 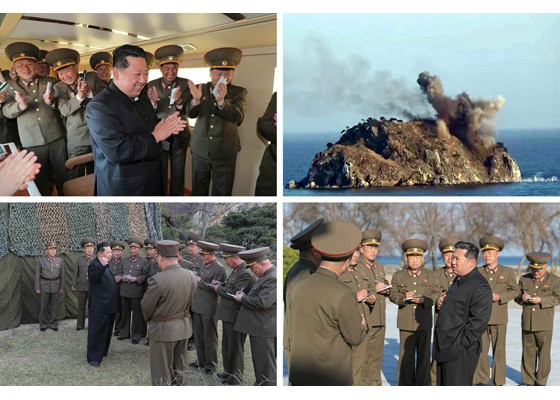 (Rodong Sinmun/Government of the Democratic People’s Republic of Korea)

“The respected Comrade Kim Jong Un highly praised the national defence scientific research sector for registering continuous successes in attaining the core goals of securing the war deterrent set at the 8th Party Congress, and extended warm congratulations on behalf of the Party Central Committee,” according to the state newspaper.

The South Korean military identified the weapon tested as either “a newly developed heavy artillery system or upgraded KN-23 missiles,” according to the country’s Yonhap News Agency. The system, it said, citing weapons experts, is an attempt to replicate the American Army Tactical Missile System (ATACMS). Its range is up to 600 kilometers, the site claimed, making it a threat to South Korea but not the United States.

North Korea and South Korea – and their respective allies, China and America – are technically at war, as neither side signed a peace treaty after the active phase of the Korean War, which ended in 1953. America’s military support of Seoul is in recognition of the technically ongoing hostilities.

The South Korean Joint Chiefs of Staff (JCS) confirmed the test consisted of launching two projectiles on Saturday that flew 110 kilometers, much less than the 600-kilometer range they allegedly have.

“We are tracking North Korea’s launch trend in real time with the United States, and we are taking all necessary measures to monitor and maintain a readiness posture,” the JCS said in a statement, according to South Korea’s JoongAng Ilbo.

The newspaper noted that Pyongyang appeared to time the launch to precede American-South Korean military exercises scheduled to begin on Monday, which Seoul has limited significantly under current leftist President Moon Jae-in. Moon made ending the Korean War a priority of his administration when elected and attempted to bring North Korea to the table on the matter through multiple in-person engagements with Kim, but will apparently fail to do so, as he leaves office on May 10.

Multiple reports immediately preceding the latest launch suggest that North Korea has returned to an outwardly hostile stance after ceasing nuclear weapons testing since 2017 and largely abstaining from threatening its neighbors through the Chinese coronavirus pandemic, which North Korean officials dubiously claim resulted in zero coronavirus cases within the country’s borders.

Last week, satellite images surfaced appearing to show new construction at the Punggye-ri Nuclear Test site, which the regime claimed to have blown up in 2018. The activity, according to satellite image observers, appeared to be the “excavating” of areas around the collapsed tunnel, one of three used to install and detonate nuclear weapons. Eyewitnesses living near the site indicated to Radio Free Asia (RFA) last week that they had seen more government vehicle traffic into and out of the site, consistent with what the images appeared to show.

In late March, North Korean state media outlets announced the successful launch of an alleged new model of ICBM. Given the extended range of such a weapon, which could in theory carry a nuclear weapon, observers interpreted the launch as a threat to the United States more than to South Korea, which the North can reach with much shorter-range weapons.

The projectile launch this weekend followed the celebration of a holiday the communist Kim cult refers to as the “Day of the Sun,” the birthday of founder Kim Il-sung, Kim Jong-un’s grandfather. The late Kim’s birthday falls on April 15; Rodong Sinmun reported lavish festivities to worship the brutal dictator.

Among the celebrations were, reportedly, a large “public procession” that Kim Jong-un attended.

“When the respected General Secretary [Kim Jong-un] appeared in the tribune of honor of the square amid the playing of the welcome music, all the participants raised stormy cheers of ‘Hurrah!’ for him along with fireworks let off and balloons released,” the state newspaper reported. “He extended warm greeting to all the people celebrating the significant Day of the Sun with high political enthusiasm and proud labor successes, warmly waving back to the loudly cheering crowds.”

“Columns of workers, peasant dancers and others marched past the square, holding aloft the boards bearing such slogans,” Rodong Sinmun narrated, “as ‘Our socialist country built by the President!’, ‘Legendary Chollima brought by the President!’ and ‘Endless journey for people!’”