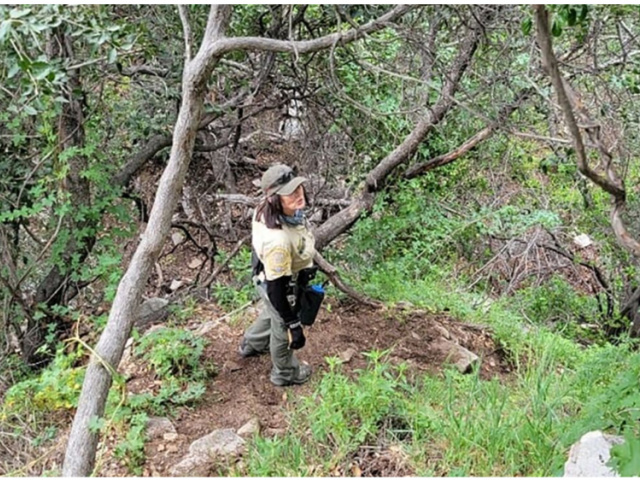 The nonverbal teen, along with his mother and sister, were hiking in the park, south of the Angeles National Forest, when he ran off from them at about 9:30 a.m., Crescenta Valley Weekly reported.

Coordinator John Gilbert of the Montrose Search and Rescue Team – affiliated with the Los Angeles County Sheriff’s Department (LASD) – told CNN that the 16-year-old boy’s family said it was “uncharacteristic” of him to run off.

The search and rescue team received a page to aid the Glendale Police Department (GDP) and LASD Parks with searching for the “developmentally disabled” teen at 11:51 a.m., the rescue team said in a press release.

After looking for hours, Steve Goldsworthy of the Montrose Search and Rescue Team heard rocks banging together, according to the Crescenta Valley Weekly. As Goldsworthy remembered learning the teen had an interest in rocks, he investigated the sound, the release said.

“We were hollering out his name and then I heard something. The only way to describe it was like two rocks clapping together,” Goldsworthy told the Weekly. “I turned to [Mike Leum another team member] and asked if he heard the [clapping].”

Goldsworthy then instructed the Burbank Police Department’s (BPD) airship to take a look down the canyon, the release noted. The helicopter crew spotted the boy.

“Our team member went down the mountainside and made contact with the missing person,” according to the rescue team.

The release noted Goldsworthy worked to establish a rapport with the teen as he understood the situation to be delicate.

“I threw a rock down the hill; he did the same and even came over and fist-bumped me,” he said.

Goldsworthy and two other team members walked the boy up the hill as he had a negative reaction after seeing the Los Angeles Sheriff’s Department helicopter, and they could not hoist him up the mountainside with the aircraft as they had planned to do, the report noted. Once they reached the hilltop, the teen was treated by paramedics and reunited with his family, according to the release.

“Our Department was thrilled this incident had a happy ending,” the LASD said.

Search efforts were assisted by the Sierra Madre Search and Rescue Team and the Altadena Mountain Rescue Team, while the BPD, LAPD Headquarters, LASD, and GPD provided air support.