RIVERSIDE COUNTY, California — Matt Capelouto never imagined he would be where he is today, on the front lines of a drug epidemic far deadlier than the Afghanistan War, the Iraq War, the Chinese coronavirus, and Russia’s invasion of Ukraine.

Over two years ago, Capelouto said, his 20-year-old daughter Alexandra was attending Arizona State University on a full academic scholarship. She was on her way to the next phase in her life when, two days before Christmas, she was found dead in her bedroom while back home in California on winter break.

Before her death, Capelouto said Alexandra was sold a counterfeit pharmaceutical drug for depression and insomnia by a dealer through the social media app Snapchat. The dealer, Capelouto said, knew the counterfeit drug could kill Alexandra because it was laced with fentanyl — the deadliest drug on today’s market coming almost exclusively over the U.S.-Mexico border via the Mexican drug cartels after having been manufactured in China.

“I want it to be clear, my daughter didn’t die from an overdose. She was poisoned,” Capelouto said during a roundtable discussion with Reps. Darrell Issa (R-CA) and Ken Calvert (R-CA) on Tuesday. “It wasn’t wise, but she was seeking to treat her depression and insomnia.” 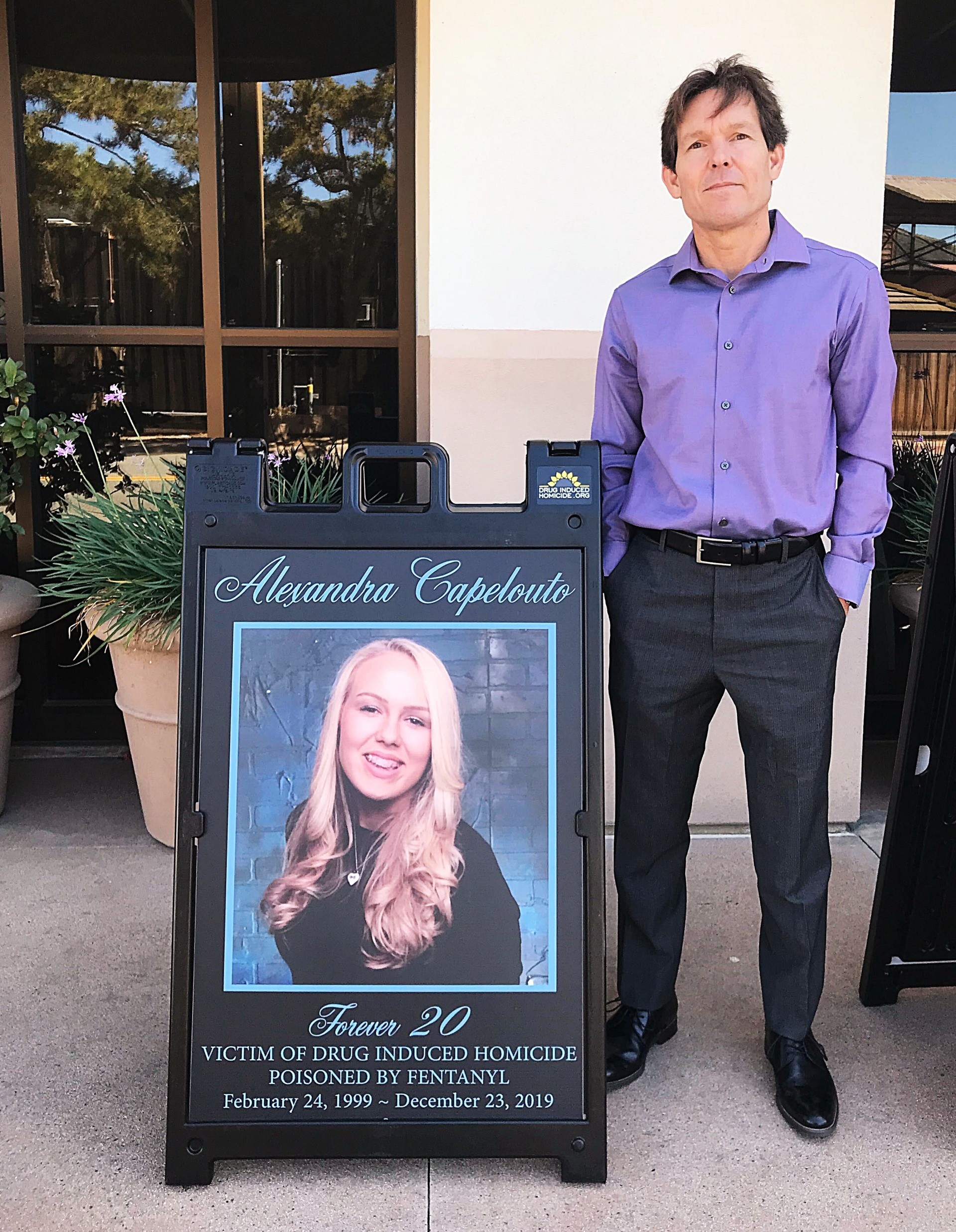 Matt Capelouto stands next to a photo of his daughter, 20-year-old Alexandra, who died after taking half a dose of a counterfeit pill laced with fentanyl. (Photo via John Binder for Breitbart News)

“Americans need to know that the bulk of fentanyl is coming from China and then being sold to the deadliest terrorist organization in history — the Mexican drug cartels,” Capelouto said.

And yet, as Capelouto noted, federal law enforcement is seizing just 10 percent of the counterfeit pills that are coming across the nation’s porous southern border, indicating that tens of millions more counterfeit pills, laced with fentanyl, have made their way into American communities like Riverside County.

It is a national security threat that Capelouto said the federal government is unwilling to take on, starting with the Chinese Communist Party and the Mexican drug cartels.

“The terrorist organization, the Mexican drug cartels, are operating just south of our border,” Capelouto said. “Why has our own government never gone beyond our own borders to dismantle these terrorists?”

“The deadliest chemical attack ever is taking place right before our eyes and we’re not fighting back,” Capelouto continued.

In Alexandra’s case, law enforcement initially marked her death as a non-criminal overdose. In the coming months, though, Capelouto told Breitbart News that the dealer responsible for his daughter’s death is facing federal charges that seek to lock him up for at least 20 years.

It is the first case out of Riverside County, a community just 115 miles from the U.S.-Mexico border, that has made its way through the federal criminal court system. A murder conviction, Capelouto suggested, would be historic.

“Young people are making the same decisions that we made, but now they’re dying,” Capelouto told Breitbart News.

Capelouto is no longer only invested in his daughter’s case.

He now runs the group Drug Induced Homicide and for years has worked with Riverside County District Attorney Michael Hestrin and Sheriff Chad Bianco to change California’s state law to make it easier for the victims of fentanyl distribution to score murder charges against dealers and traffickers.

Currently, state prosecutors are left to prove that a dealer knowingly sold a person a fatal dose of fentanyl.

“Alexandra’s Law,” Capelouto said, would mimic many drunk driving laws. Under the policy, a dealer would be hit with a warning following their first arrest. That warning would make clear that if in the future, if a person dies as a result of their drug distribution, they will be subject to murder charges.

“There’s not a more valuable law being proposed today than Alexandra’s Law,” Capelouto said, hopeful that the policy will get the necessary support when it comes before the committee again in a week.