The People’s Daily, the official newspaper of the Chinese Communist Party, published a video on its webpage on Wednesday described as a “satirical play” showing a Chinese man in a headdress pretending to be a member of the Native American Shoshone tribe, accusing America of “genocide.”

The video furthers a years-long campaign by the Party — itself committing genocide against the indigenous people of East Turkistan today — to accuse America of human rights abuses in an attempt to discredit any criticism of China’s abysmal human rights record. China’s record is particularly egregious against indigenous communities in areas where the Han Chinese are not the majority, such as East Turkistan, occupied Tibet, and Inner Mongolia, where dictator Xi Jinping has outlawed teaching local languages and crushed religious and cultural practices.

The “satirical play” posted online on Wednesday, which did not contain any apparent jokes, featured a People’s Daily personality interviewing the man about American nuclear weapons tests in the western United States in the 1950s. The man appears onscreen and pouts, to which the People’s Daily host, a woman, asks, “Hey, what’s wrong? Why so sad?”

“American government had nuclear tests on our territory,” the “native” man replies. “This is genocide!”

The man goes on to say, speaking in the voice of a Shoshone tribe member, “My fellow tribesmen’s health has been devastated. Many local people suffered developmental retardation, leukemia, and various types of cancers.”

“That’s so detestable,” the woman replies.

At one point during the “satirical play,” the slogan, “the road to the founding of the United States was the genocide of the Indians,” appears on the screen. The play also claims “American media,” without specifying, call the Shoshone land “the most bombed land on Earth.”

“From Native American rights to the treatment of Black Americans, the U.S. is a pseudo defender of human rights that actually disregards human rights in practice,” the caption on the video reads.

The Shoshone are a large tribe consisting of several communities throughout Nevada and Idaho. Perhaps the most prominent historical Shoshone historical figure outside of the Native American community is Sacagawea, the guide who helped European explorers Meriwether Lewis and William Clark map out the territory obtained through the Louisiana Purchase.

The People’s Daily gave no indication that any members of the Shoshone community were involved in the production of the video.

Native American ethnic groups do not typically use headdresses as casual wear; the items can carry tremendous significance, either as religious and ceremonial items or to be worn at times of war or other major changes. Historical photos of Shoshone people do not appear to show headdresses worn casually, nor do photos of Shoshone headdresses bear any overt resemblance to the item the People’s Daily actor wore in the video. 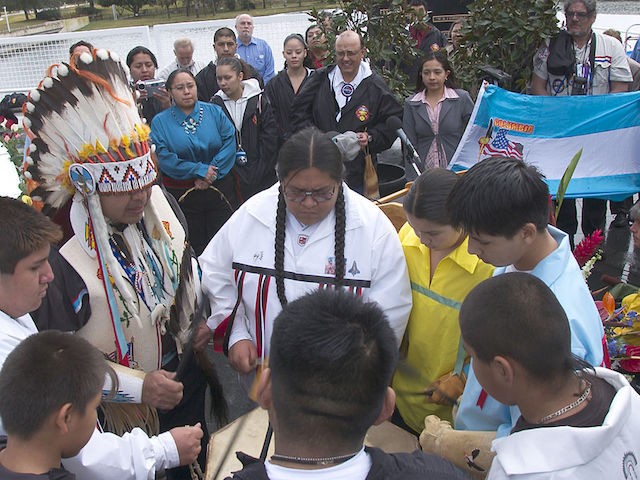 Native American activists have for years condemned the wearing of headdresses as fashion statements or costumes by people outside of their communities.

“Costumes that mock Native peoples, defame our traditions and cultures, and perpetuate negative stereotypes are racist,” IllumiNative, a group that defines its goal as challenging “the negative narrative that surrounds” Native Americans, said last year in response to a Real Housewives celebrity wearing a headdress on the Bravo program. “‘Playing Indian’ is a form of mascotry that is not just offensive, it is part of a long history of how Native peoples have been dehumanized.”

Native American organizations have also objected to the mass marketing of headdresses for profit. In 2012, the Navajo nation sued retailer Urban Outfitters for a series of products marketed as “Navajo” garb with no relation to the indigenous community and no profits going to the alleged originators of the designs.

Blinken and Sullivan reportedly did not challenge the Chinese official on his claims, despite no significant evidence that Chinese officials have moved to improve the country’s human rights record.

China’s record of racism towards Africans is poor, just as its record of discrimination against indigenous communities leaves much to be designed. In 2018, China’s CCTV state broadcaster aired a Lunar New Year program featuring Chinese people in “blackface” pretending to be Africans who love the Communist Party. The sketch, like the “satirical play” on Native Americans, featured Chinese people speaking on behalf of entire African communities, praising China for its alleged help in development.

Rather than apologizing for the international offense the “blackface” skit caused, CCTV again featured Han Chinese people in black face paint pretending to be African in the 2021 version of its Lunar New Year special.