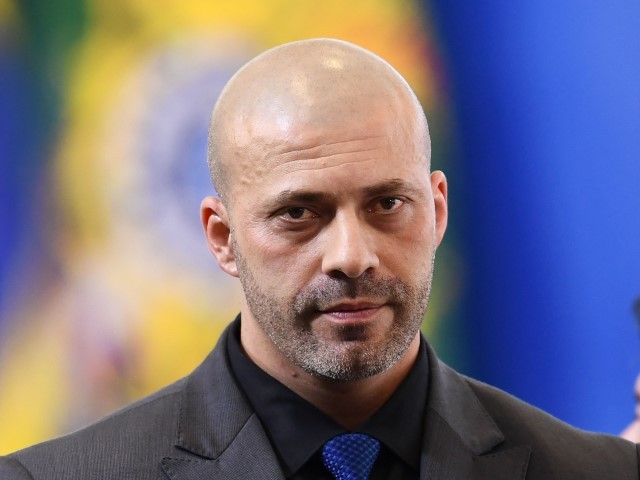 Brazilian Congressman Daniel Silveira slept in his office on Wednesday night in defiance of a Supreme Tribunal Federal (STF) order that he wear an ankle monitor. Silveira was arrested last year for making a YouTube video criticizing the STF, Brazil’s highest court; the ankle monitor was a requirement of his tentative release.

Silveira, a conservative aligned with President Jair Bolsonaro, agreed to leave his office – where legislative immunity would protect him from arrest – and wear the ankle monitor after STF Justice Alexandre de Moraes, who initially ordered his arrest, imposed a daily penalty of 15,000 reais ($3,163.89) for not complying. Silveira told reporters he could not, in good conscience, allow such a financial penalty on his family.

Brazil’s STF is its highest court – the equivalent of the United States Supreme Court – and has the power to order arrests and interpret the constitution. De Moraes is one of the majority of justices on the bench (referred to in Portuguese as “ministers”) appointed by socialist or left-aligned presidents — Bolsonaro’s three predecessors Luiz Inácio Lula da Silva, Dilma Rousseff, and Michel Temer. The court has aggressively expanded its campaign against the free speech of conservatives in the country since Bolsonaro became president. De Moraes himself has spearheaded the shutdown of conservative news site Terça Livre, Silveira’s arrest, and an alarming series of raids in 2020 against comedians, YouTubers, and journalists perceived to be aligned with Bolsonaro, on “fake news” grounds.

Silveira, serving his rookie term in Congress after serving in the Brazilian police force, was initially arrested in February 2021 after publishing a Youtube video commentary featuring a profanity-laced tirade against the STF in which he accused most of the court’s justices of having “no character, no scruples, no morals.” De Moraes called the language itself a “flagrant crime” and accused Silveira in the arrest warrant of “incitement of the population to the subversion of the political and social order.”

Silveira was released from prison in November on the condition that he is not allowed any form of expression on social media, cannot interact with anyone else being investigated for alleged crimes of political dissent, and cannot travel freely except for visits to Brasilia for congressional business. He spent five months behind bars, having lost house arrest rights after defying similar ankle monitor orders.

De Moraes found this week that Silveira had violated the provisions of his freedom by allegedly disrespecting the supreme court yet again and issued an order that he wear an ankle bracelet. Silveira refused to comply and went to Congress, where police could not legally arrest him.

“I have no respect for the order, I have the respect for the judiciary that Alexandre de Moraes has for the legislative,” Silveira declared. “So that respect … you see that he has no limits now. He’s a runaway train. I think he’s a moron, too.”

In an interview with Jovem Pan, a news broadcaster in Brazil, Silveira insisted on Wednesday that de Moraes’s order was “illegal and unconstitutional.”

What followed was a wild 48 hours in which Silveira refused to leave the Chamber of Deputies, the lower house of Brazil’s congress where he represents Rio de Janeiro. Police cannot arrest a lawmaker in Congress due to legislative immunity laws regarding activities within that building.

The Brazilian website UOL recounts fellow conservative lawmakers supporting Silveira by bringing him a mattress, pillows, and water. Several lawmakers joined him for a breakfast of bread with butter and mortadella and coffee. The outlet named at least two lawmakers who arrived early in the morning on Thursday to join Silveira in solidarity: Carla Zambelli and Luiz Lima. Several other lawmakers joined later for morning prayers, many of them identified with Brazil’s Evangelical conservative movement. Senator Flavio Bolsonaro, the president’s son, also arrived, calling Silveira a “good guy” and expressing opposition to the court’s order.

“In our Bolsonaro government and among bolsonaristas … no one gets left behind,” Zambelli wrote on social media before her departure to visit Silveira in the morning.

De Moraes responded to Silveira’s refusal by imposing the daily fine of 15,000 reais and accusing Silveira of “offending the very dignity of Congress.” He also opened a new criminal investigation into Silveira for contempt.

“It’s a strange and bizarre situation … not only strange and bizarre, but also the defendant’s option is of dubious intelligence,” de Moraes said. “He himself restricted his freedoms to the architectural limits of the Chamber of Deputies, which is much more drastic than what the judicial decision called for.”

Silveira conceded to wearing the ankle monitor and was scheduled to appear before the police to be fitted on Thursday, lamenting in an interview with Jovem Pan that the fines were an unacceptable attack on his family and he would not deprive them of the money.

“The decision [of imposing a fine] is that of a weak, frustrated person who has no resources to win the battle constitutionally,” Silveira said. “When he seizes assets, when he freezes accounts, 15000 reais a day … if it’s going to affect my family, I’m not going to submit to that anymore.”

Silveira also branded de Moraes an “enemy of the state.”

“I can’t accept what is happening passively,” Bolsonaro said in public remarks at a departure event for outgoing ministers. “I am not stronger or more macho than anyone. When I was in the military, I vowed to give my life for the military. I believe that all of you here today swore to give your lives for your freedom.”

“We cannot accept what is happening passively – ‘oh, it’s not with me, not my problem’ … it will come to you,” Bolsonaro warned. “Today we have a president of the republic – executive leader – demanding election transparency.”

“You can’t have counselors by your side saying always, ‘calm down,’ ‘wait for the right moment,’” he continued. “Calm, my ass, damn it!”