North Korea’s Foreign Affairs Ministry separately issued a statement condemning the United Nations and America in particular for passing a resolution on North Korea’s long list of human rights abuses against its own people, accusing America of being home to “all kinds of social evils and acts of institutional human rights violations.”

The outburst follows the election of a new, conservative president in South Korea, Yoon Suk-yeol, last month, who will take office in May. As a candidate, Yoon promised to bring Seoul closer to the United States and implement a foreign policy that takes a harder line against the North. Current president Moon Jae-in attempted to expand dialogue and cooperation with Pyongyang to deter Kim from threatening his state, a policy that did not succeed in his goals of ending the 70-year-old Korean War formally or getting Kim to commit to ending nuclear weapons development.

Kim’s insults directed at Suh are a response to the defense minister assuring South Korean citizens that their military is prepared for any attack from the North in response to Pyongyang’s declaration last month that it had successfully tested a new intercontinental ballistic missile (ICBM).

“Currently, our military possesses large numbers and various types of missiles that have greatly improved in terms of ranges, accuracy and power, and it has capabilities to accurately and swiftly strike any targets in North Korea,” Suh said at an event “marking the reinforcement of the Army Missile Strategic Command,” according to South Korean news service Yonhap. 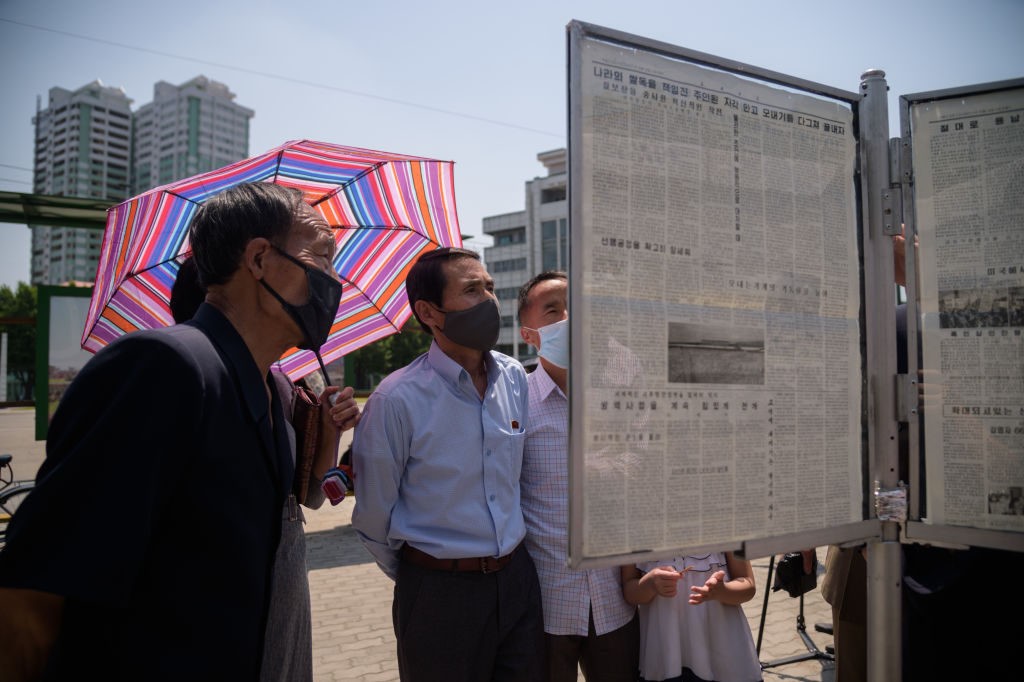 File/People read a newspaper at a news stand in Pyongyang on June 6, 2020. Kim Yo Jong on June 4 threatened to scrap a military agreement signed with Seoul and pull the plug on inter-Korean projects in a possible retaliation over Seoul’s failure to stop North Korean defectors dropping information from hot-air balloons criticising the regime’s human rights record and nuclear ambitions. (KIM WON JIN/AFP via Getty)

Suh emphasized that South Korea could conduct military strikes within North Korea on the “origin of any attack and its command and support facilities.”

“The south [sic] Korean Defence Minister on April 1 revealed his confrontation hysteria with the DPRK, talking about ‘preemptive strike’ on it,” Kim Yo-jong raised in a statement published by the North Korean Central News Agency (KCNA) on Sunday.

“The senseless and scum-like guy dare mentioned the ‘preemptive strike’ at a nuclear weapons state, in his senseless bluster which will never be beneficial to south [sic] Korea, either,” the statement continued. “He is a confrontation maniac engrossed in the mindset of confrontation with his fellow countrymen in the north.”

“South Korea may face a serious threat owing to the reckless remarks made by its Defence Minister,” Kim warned. “We will reconsider a lot of things concerning south [sic] Korea. South Korea should discipline itself if it wants to stave off disaster. I hope I don’t hear him blustering again.”

In addition to being the dictator’s sister, Kim Yo-jong holds the title of “vice department director of the Central Committee” of the communist ruling Workers’ Party of Korea (WPK) and has taken on an elevated public role representing the country. Kim made her diplomatic debut attending the 2018 PyeongChang Winter Olympics after President Moon invited him. She has since specialized in publishing outraged, angry, and threatening statements at America and various other enemies of the Kim regime, in contrast to Kim Jong-un’s more amicable persona.

Elsewhere in the online pages of KCNA, North Korea’s Foreign Affairs Ministry condemned America’s “illegal and inhuman hostile policy” of condemning human rights abuses on Sunday. The statement was a response to the U.N. Human Rights Council passing a resolution unanimously condemning the country’s “longstanding” human rights violations “in the strongest terms.” The resolution is noteworthy given that several high-profile human rights violators with friendly ties to North Korea – including Cuba, the illegitimate socialist regime in Venezuela, Russia, and Eritrea – currently sit on the Council. South Korea also currently holds a seat.

“As the fair and impartial international society recognize, the anti-DPRK [North Korea] ‘human rights resolution’ put forward by the U.S. and the Western countries every year does not bear any relation to genuine human rights,” the Foreign Ministry bellowed, “and it is no more than a highly politicized means of hostility to tarnish the dignified image of the DPRK and to deny the genuine rights and interests of the Korean people.”

“All kinds of social evils and acts of institutional human rights violations such as racial discrimination, national chauvinism, violence against women, violation of children’s rights, police violence and gun-related crime are rampant in the U.S. and the Western countries,” the statement continued. “But they wish to pose as ‘human rights judges’! It is really the height of deception, hypocrisy, shamelessness and double standard.”

“We express serious concern over the fact that UNHRC [Human Rights Council] is now being reduced to a tool of the U.S. and the Western countries for gaining their unjust political ends,” the Foreign Ministry asserted, “oblivious of its inherent mission to reject politicization, selectivity and double standard in the issue of human rights and to contribute to the worldwide protection and promotion of human rights through dialogue and cooperation based on the principles of impartiality and objectivity.”

North Korea is a communist country that indoctrinates its people into worshipping the Kim family. Over 200,000 people are believed to be languishing in labor camps over a variety of “crimes” that include Christianity, being exposed to Western music or movies, or general “reactionary thought.” The population of the camps has reportedly increased since 2020 as citizens were detained for allegedly violating strict Chinese coronavirus restrictions. Extensive evidence collected by human rights groups and journalists suggests North Korea commits- other crimes such as widespread executions, starvation, and slavery.

South Korea’s Ministry of Unification, which handles relations with the North, condemned the vitriol out of Pyongyang this weekend at its regular Monday press briefing.

“The Ministry of Unification clearly points out that North Korea should not cause additional tension on the Korean Peninsula in any case,” spokesperson Lee Jong-joo told reporters.