China — the world’s worst polluter by far, with a seemingly bottomless appetite for burning dirty coal to fuel its industrial engine — lectured Kerry about “the U.S.’ inconsistency in global climate cooperation and tendency to politicize the issue,” according to the state-run Global Times.

The Chinese Communist paper’s account of the meeting in Davos, Switzerland, between Kerry and China’s “special climate envoy” Xie Zhenhua reads like a satire of opportunistic China using climate change as a club to bludgeon its Western competitors, while the Chinese litter the developing world with coal-fired power plants:

“It isn’t just about words anymore – it is about action. Action, now, is critical.” These words by Xie were a call to arms to all people, and especially global leaders, to radically transform the way the global economy functions if “we’re to avoid climate catastrophe,” according to an article published on the website of the World Economic Forum.

Kerry and Xie have been working closely on finding climate solutions, with Kerry noting that “For at least the next 8 years, we must radically change our economic system and our reliance on fossil fuels if we’re to stay aligned to Paris Agreement targets. This is the real battle of our time,” said the article.

Xie stressed that China will take actions in three aspects: policy formulation, energy transformation and forest carbon sinks, which include promoting the green and low-carbon energy transformation, strengthening forest carbon sinks, and responding to the “Trillion Tree Campaign” launched by the WEF by striving to plant 70 billion trees in 10 years. 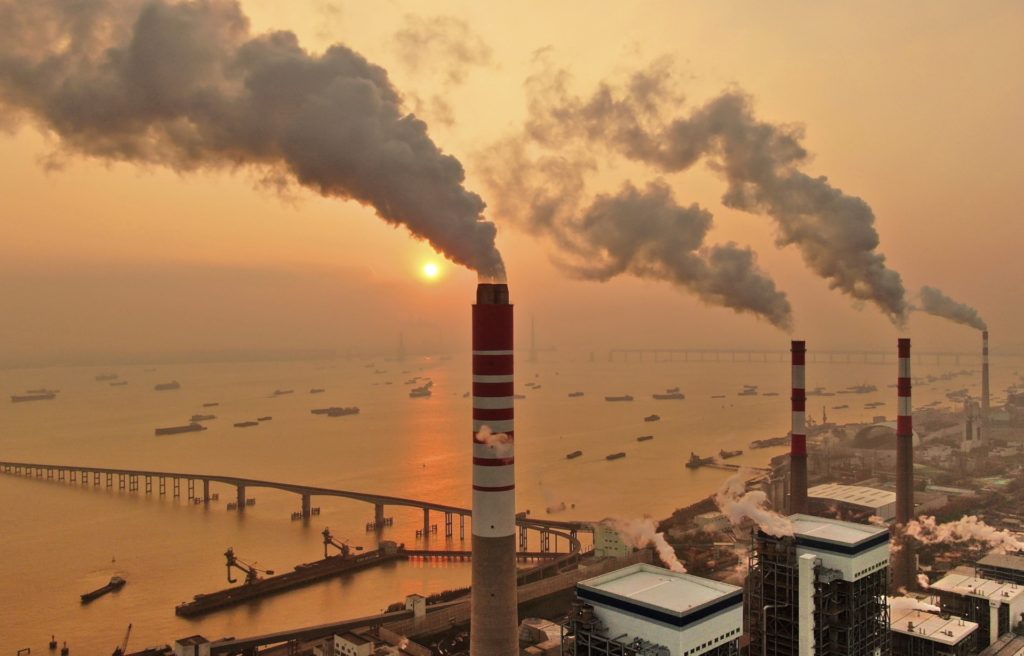 A coal-fired power plant on the Yangtze River in Nantong in eastern China’s Jiangsu province on Dec. 12, 2018. (Chinatopix via AP)

China might be willing to plant some trees, but it most certainly is not greening or transforming its rapacious energy consumption. The Chinese are building more coal power plants than the rest of the world combined and running an all-out campaign to “produce as much coal as possible” to fuel them, to quote China’s National Development and Reform Commission. China plans to increase coal production by 300 million tons this year, having been spooked by a severe energy crisis in late 2021.

The Global Times ignored China’s record to insist Xie’s visit to Davos demonstrated “China’s sincere attitude toward climate cooperation,” while the U.S. allegedly has an “erratic approach to international cooperation on climate issues” that has “damaged its international credibility,” especially after the Trump administration withdrew from the Paris climate agreement.

Of course, the Global Times did not mention that one of former President Donald Trump’s chief complaints about the Paris agreement was that it allowed China to pollute heavily for a decade to come — which it is doing — while imposing steep and immediate costs on the United States.

“In contrast to some European countries, the U.S. has again failed to get bills addressing climate change into the legislative process. Given its domestic political situation, maintaining a consistent strategy or finding a smooth path to legislation is hardly guaranteed,” the Global Times complained.

“China-U.S. cooperation on climate change cannot be divorced from the overall situation of China-U.S. relations. The U.S. should work with China to meet each other halfway and take positive actions to bring China-U.S. relations back on track,” the editorial pontificated, suggesting Beijing thinks it has a good chance of squeezing concessions from the Biden administration.