President Joe Biden’s budget request asks Congress for at least $12 billion extra to accelerate the inflow of economic migrants into Americans’ jobs and homes but minimizes the requests for anti-drug efforts, border enforcement, and deportations.

The budget request “completely flips the script” for the Department of Homeland Security (DHS), said Robert Law, a former DHS official who now works at the Center for Immigration Studies.

Instead of excluding economic migrants, as required by federal law, the agency is telling would-be migrants that “We are funding ways to bring you in and ensure that you never leave, even if there’s no actual immigration status that you’re qualified for,” he told Breitbart News.

Republicans in Congress should reject the request, he added.

Amid the agency’s welcome for a record flow of at least 1 million economic migrants in 2021, the administration does not ask for money to complete the border wall.

The White House does not ask Congress for funds to launch a crash program to block drug smuggling, restart the deportation of illegal migrants, compensate Americans for illegal migrants’ crimes, investigate fraud in work-visa programs, reinforce the stretched border agents, or deploy the underused immigration-enforcement agents.

The Budget includes $375 million to support operationalizing this important [draft fast-track asylum] rule, so that those who are eligible for asylum are granted relief quickly, and those who are not are promptly removed.

Mayorkas drafted the fast-track asylum rule to let pro-migrant officials award asylum and citizenship to many economic migrants instead of the decision being made by judges. The rule is not operational, is arguably illegal, and will face a skeptical hearing in court.

Mayorkas also wants $20 million to help lawfully deported migrants reunited with their left-behind children in the United States and $12 million to help migrants get green cards in exchange for promising to help criminal investigations. 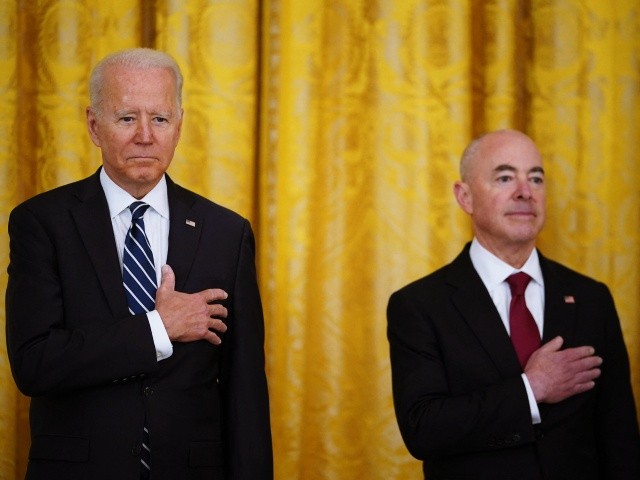 US President Joe Biden (L) and Homeland Security Alejandro Mayorkas (R) take part in a naturalization ceremony for new citizens ahead of Independence Day in the East Room of the White House in Washington, DC on July 2, 2021. (MANDEL NGAN/AFP via Getty Images)

The White House’s summary of the budget also touted a request for $765 million to accelerate the award of legal status to migrants and contract workers. The money will help “efficiently process increasing asylum caseloads; address the backlog of applications for work authorization, naturalization, adjustment of status, and other immigration benefits; and improve refugee processing,” the summary said.

Overall, the White House is asking for $97.3 billion, an increase of $6.5 billion, for the wide-ranging agency for Fiscal Year 2023. The agency is responsible for an emergency response to disasters, border security, the defense of computer networks, migration processing, the U.S. Coast Guard, the Secret Service, and much else.

Outside the DHS, the Biden budget also asks for “$6.3 billion to the Office of Refugee Resettlement (ORR) to help rebuild the Nation’s refugee resettlement infrastructure and support the resettling of up to 125,000 refugees in 2023,” plus $621 million extra to speech the Department of Justice’s approval of economic migrants.

It also asks for “$150 million in discretionary resources to provide access to [lawyers for illegal migrant] ]adults and families … [and pushes] a proposal for $4.5 billion in mandatory resources to expand these efforts over a 10-year period.”

In fact, the budget wants Congress to spend at least another $8.5 billion on Mayorkas’ priorities that have nothing to do with the border.  He is asking for $3.5 billion to fund “climate resilience and adaptation programs” at DHS, $2.6 billion extra for disaster relief, $564 million extra for the Coast Guard, $486 million extra for computer-network defense, $1.6 billion extra in pay for employees of the Transportation Security Administration — but just “$309 million in modern border security technology,” such as X-Ray-style machines to detect hidden drugs in vehicles.

Since at least 1990, the D.C. establishment has used a wide variety of excuses and explanations — for example, “Nation of Immigrants” — to justify its policy of extracting tens of millions of migrants and visa workers from poor countries to serve as workers, consumers, and renters for various U.S. investors and CEOs.

The self-serving economic strategy of extraction migration has no stopping point. It is harmful to ordinary Americans because it cuts their career opportunities, shrinks their salaries and wages, raises their housing costs, and has shoved at least 10 million American men out of the labor force.

Not surprisingly, the wealth-shifting extraction migration policy is very unpopular, according to a wide variety of polls. The polls show deep and broad public opposition to labor migration and the inflow of temporary contract workers into jobs sought by young U.S. graduates.

The opposition is growing, anti-establishment, multiracial, cross-sex, non-racist, class-based, bipartisan, rational, persistent, and recognizes the solidarity that Americans owe to one another.

Poverty kills people every day. That’s the reality we live with. Hear Artemis Bell, Disneyland employee from Anaheim California talks about how her co-worker died in her car, because she lived in it. #CEOsvsWorkers #StopDisneyPoverty pic.twitter.com/IuNff5BzeG