Five days after the White House cast President Joe Biden as a man on a mission to be “leader of the free world” ahead of his disastrous tour of Europe he returns to the diplomatic stage Tuesday to meet visiting Singapore Prime Minister Lee Hsien Loong.

The White House has announced the two are scheduled meet in the Oval Office at 10:35 AM before later making a joint media appearance.

Asia, China, Russia and Ukraine are all on the agenda for the two leaders.

The get-together has been touted as an opportunity to shone a light on Washington’s long-touted “pivot to Asia” while helping Biden build on his efforts to reassure the American people he is a stable force able to keep the country safe from external threats.

“We are very happy” to host Lee, a senior U.S. official said by way of preview Monday night, “because we believe that the U.S.-Singapore strategic partnership is extremely strong and valuable to both countries, and it has supported peace and prosperity throughout the Indo-Pacific.”

A majority of Americans believe the world is less stable since Biden assumed office, a Wednesday TIPP poll revealed. https://t.co/FJ7WtKWlVC

AFP reports despite the concerns over China and its aggressive moves in the Indo-Pacific region, Ukraine is still expected to loom large.

Singapore announced in February it was joining other pro-Western powers in imposing sanctions on Russia, including blocking financial transactions.

The sanctions include restrictions on some exports and a ban on financial institutions from doing business with Russian banks.

The wealthy city-state rarely sanctions other countries without U.N. backing, but Foreign Affairs Minister Vivian Balakrishnan cited the “unprecedented gravity” of the crisis.

“The president and prime minister will be meeting at a very critical time, one in which the rules-based international order faces (an) unprecedented challenge,” the U.S. official told reporters on condition of anonymity, even as Biden and his staff sought to salvage something from his bungled tour of Europe and his off-script moments.

Russia’s attack on Ukraine, which Putin says he wants to “demilitarize,” has deeply shocked U.S. allies beyond Europe, including Australia and Japan.

As Breitbart News reported, last week Biden was described as a man leading the free world as he began a series of summit meetings in Europe with the promise to “hold Russia accountable” for its invasion of Ukraine.

The results hardly matched the ambition. 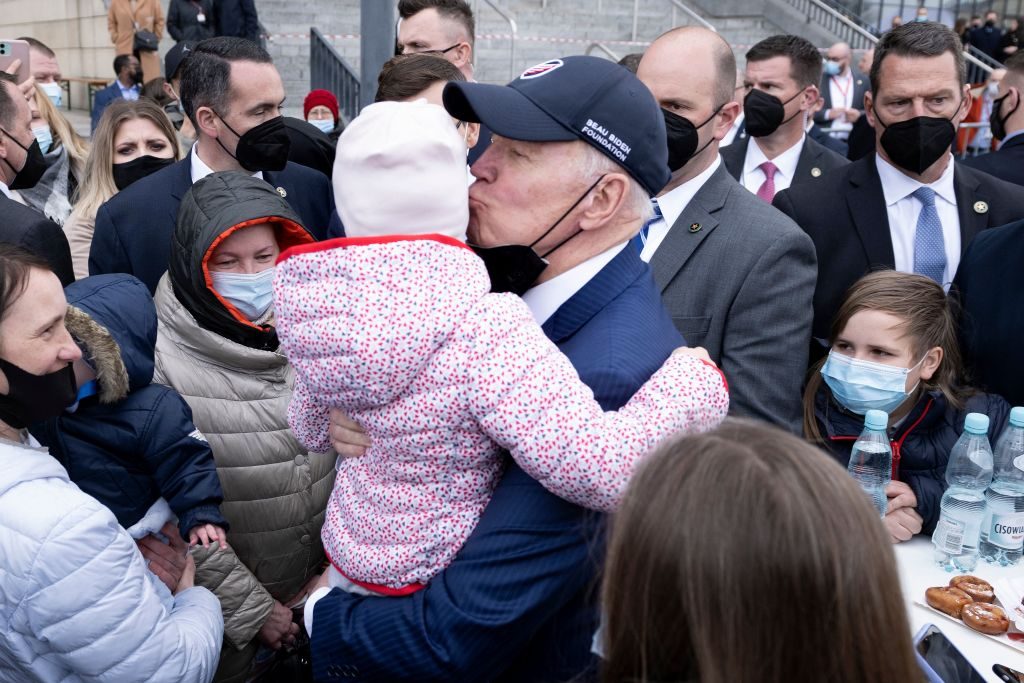 Biden kisses a child while meeting refugees of Russia’s war with Ukraine at PGE Narodowy Stadium in Warsaw, Poland on March 26, 2022. (BRENDAN SMIALOWSKI/AFP via Getty)

Biden then told the 82nd Airborne Division in Poland they may be deployed to Ukraine, a statement that contradicted Biden’s promise not to send Americans to die protesting Ukrainian borders.

At the end of the trip, Biden’s unscripted call for regime change in Russia led to fears it could embolden Russian President Vladimir Putin to escalate war tensions with NATO.

Europe’s leaders were left to clean up that particular diplomatic crisis as Biden flew home.