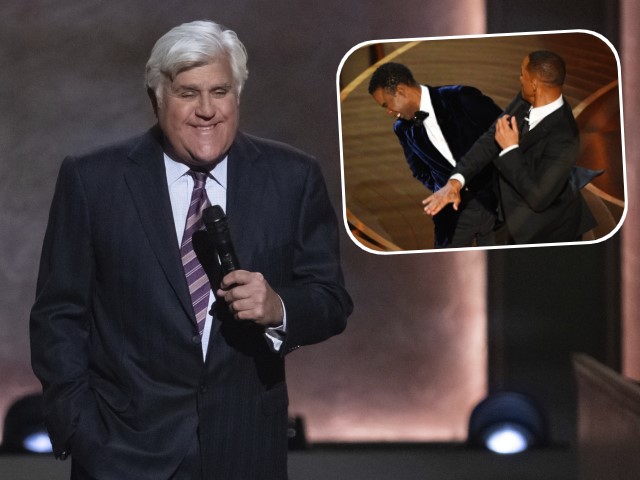 Veteran late-night TV host and comedian Jay Leno shared his thoughts about actor Will Smith slapping comedian Chris Rock at this year’s Oscars, saying that the worst part of the incident was when Smith yelled at Rock from his seat after the onstage attack.

“To me, the thing that’s most disturbing wasn’t the slap, because he was kind of smirking after he slapped [Rock]. It was the yelling of the obscenities. Then you go, ‘Whoa. What’s going on here?’ This is real anger,” Leno said, according to a report by Palm Beach Daily News.

Last month, during the 94th Academy Awards, Smith marched onto the stage and smacked Rock after the comedian made a joke at the expense of his wife, Jada Pinkett Smith — a scene that left audience members and viewers at home shocked and confused.

The actor then retook his seat in the audience and twice shouted, “Keep my wife’s name out of your fucking mouth.”

After that, the Academy Awards condemned the battery, declaring that it “does not condone violence in any form,” and later announced a formal investigation into the matter.

The Academy does not condone violence of any form.

Tonight we are delighted to celebrate our 94th Academy Awards winners, who deserve this moment of recognition from their peers and movie lovers around the world.

Leno also took issue with the Academy of Motion Picture Arts and Sciences saying that it planned to investigate the incident.

“What are you investigating?,” Leno asked. “It had to be the most recorded assault in history.”

“I saw the back of his shoe, I saw Chris’ ear. There were so many cameras on this incident. What are you investigating? I know sometimes things are just what they appear to be,” the TV host added.

Smith later resigned from the Motion Picture Academy, saying in a statement that his “actions at the 94th Academy Awards presentation were shocking, painful, and inexcusable.”

After that, however, the Academy of Motion Picture Arts and Sciences’ 54-person board of governors banned Smith from attending the Academy Awards or any Academy events for 10 years. The move came just 12 days after the actor assaulted Rock at the Oscars.