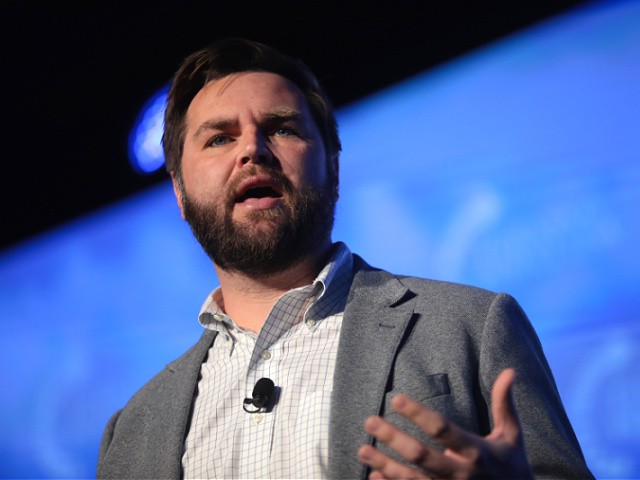 Author J.D. Vance, a GOP candidate for U.S. Senate in Ohio, is out with a provocative new television advertisement on Tuesday calling out establishment media outlets for claiming Americans who want to secure the border and stop the flow of illicit drugs are “racist.”

“Are you a racist?” Vance says to open the ad, staring directly into the camera. “Do you hate Mexicans? The media calls us racist for wanting to build Trump’s wall. They censor us, but it doesn’t change the truth.”

Then Vance claims Democrat President Joe Biden is responsible for the deaths of Americans as a result of illegal drugs flowing across the border.

“Joe Biden’s open border is killing Ohioans,” Vance says. “With more illegal drugs and more Democrat voters pouring into this country. This issue is personal. I nearly lost my mother to this poison coming across our border. No child should grow up an orphan.”

Vance’s intense focus on immigration — and particularly the drugs coming across the open southern border — is likely a winner of an issue for him in the home stretch ahead of the May 3 GOP primary for U.S. Senate in Ohio. It also means that while several of his opponents are focused on personal attacks against each other — the first Senate debate saw Josh Mandel and Mike Gibbons nearly come to blows on stage — Vance is focused on the core issues voters care about. Vance has won every post-debate straw poll since, including that first one, surging at just the right time ahead of the primary.

We launched the #NoBSTour in mid-January & since then, I’ve done nearly 50 town halls across Ohio.

While other candidates are hiding from Ohio voters & only doing the occasional pre-scripted event, we’re gaining momentum by taking our message directly to the grassroots. #OHSen pic.twitter.com/A7dNx1vn88

Immigration has also been a centerpiece of his campaign:

“We need finish Trump’s border wall…We need to declare the Mexican drug-cartels a terrorist organization…And the final thing we need to do is stop giving welfare to people that come into this country illegally.” – @JDVance1 #OHSen pic.twitter.com/LTzjuayflU

He used his speech at the Conservative Political Action Conference (CPAC) in February to focus on the issue:

Vance’s super PAC has spent seven figures on a pair of television ads the past two months pushing the message as well, focusing on the “personal” nature of the drug crisis and open border on Vance and his childhood:

Biden’s open border policies are bringing crime & deadly fentanyl here. Americans are dying because of it.

Finish the wall. End welfare for illegals. Cut all funding for sanctuary cities.

Honored to have Maureen’s support. Angel moms have been abandoned by our leaders. It’s time to put the safety of our citizens first. pic.twitter.com/EHvtjgaDJy

This ad from Vance’s campaign in the home stretch of the race is a continuation of that broader story, and it helps Vance connect with people who have also been affected by a lack of border security.

The race is shaping up to be particularly competitive in the general election as well. While former President Donald Trump won Ohio in both 2016 and 2020, Rep. Tim Ryan (D-OH) — the likely Democrat senatorial nominee — has launched a series of ads and messages bashing China from a populist perspective. Those ads have some questioning whether anyone but Vance could hold Trump’s coalition together and win the general election as a Republican in Ohio in 2022:

Now obvious @JDVance1 is the only one who can beat this guy. Mandel/Gibbons can’t pull off the kind of campaign uniting the Trump coalition in Ohio (union households & traditional GOP voters). If the nominee is Mandel/Gibbons, Tim Ryan is going to win those union households back. https://t.co/KdQTduhM08

While Sen. Ted Cruz (R-TX) just endorsed Mandel — no surprise, as Cruz and Mandel share the same political consultants, similar to other endorsements Cruz has made nationwide — Vance just held a fundraiser in West Palm Beach, Florida, at which Trump’s eldest son Donald Trump Jr. made a surprise appearance. While not an endorsement from Trump, that appearance, plus other key support from the Trump family at important junctures, seems to be helping Vance in the home stretch.

Trump himself has not yet endorsed in the race but might in the closing weeks.