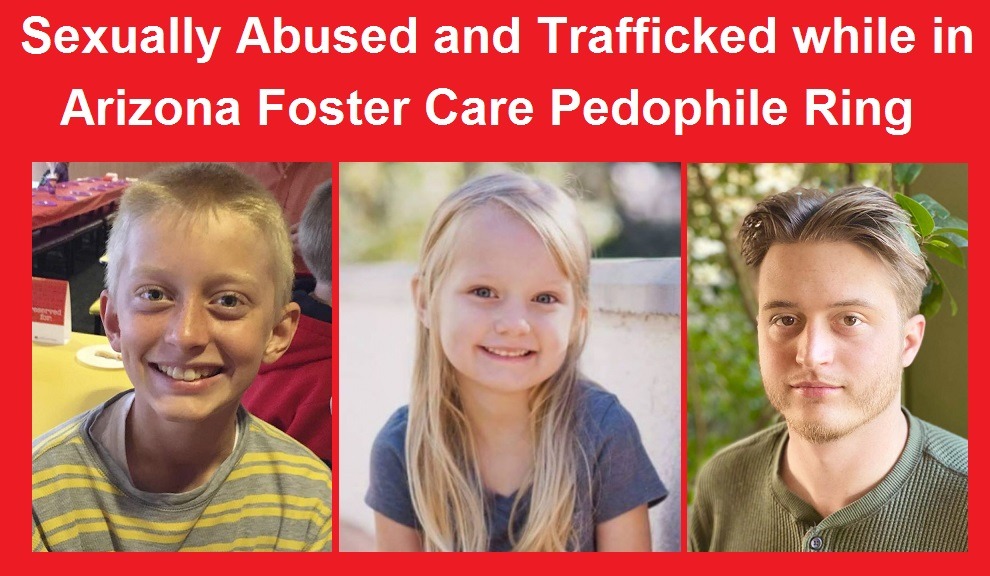 We have exposed the deep corruption in the State of Arizona for years now, where historically they have a higher percentage of children taken away from their families and put into the foster care system than any other state in the U.S., as a state that is deeply entrenched in the child trafficking network with corruption reaching the highest levels of government.

Statistics from 2015 showed that one out of every 100 children in the State of Arizona was in foster care.

See some of our previous coverage on this issue:

Is Arizona a Hub of Child Sex Trafficking? Why does Arizona Take the Highest Percentage of Children from their Homes? 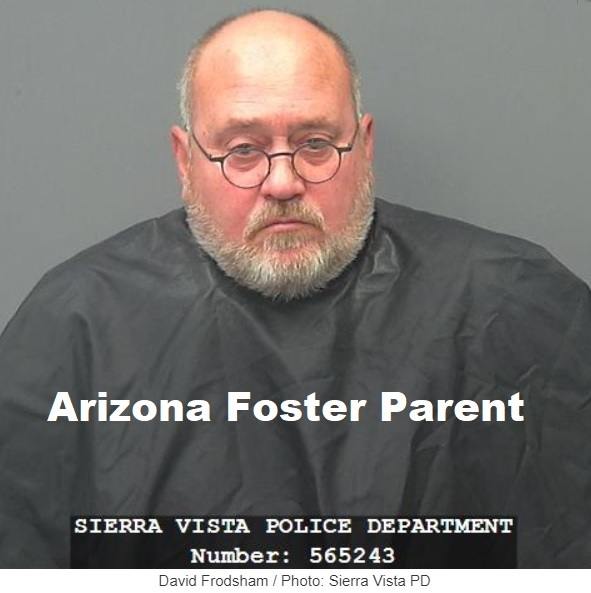 One of the most horrific stories we have covered from the State of Arizona was the case of the little girl named Devani, who was taken away from her mother against her will, and put into a foster care home in Sierra Vista with David Frodsham, who was running a pedophile pornographic and child sex trafficking ring.

David Frodsham worked with the U.S. military at Fort Huachuca in Arizona, and had previously worked in Afghanistan as a “top civilian commander,” but was kicked out of the country for sexual misconduct. His commanding officer wrote:

“I would not recommend placing him back into a position of authority but rather pursuing disciplinary actions at his home station.”

Nothing happened, however, and he continued as a licensed foster parent in the State of Arizona, where according to the lawsuit brought against him he repeatedly raped little Devani. He was convicted and is now behind bars.

Little Devani was not returned to her family, however, but put into another foster home in Arizona, where the foster mother burned 80% of her body with scalding water resulting in the loss of her toes. See:

Earlier this month (April, 2022), Michael Rezendes, writing for the Associated Press, provided new details of this child sex trafficking ring operating through the Arizona Foster Care system, as two adopted sons of David Frodsham have come forward to file lawsuits for the years they were sexually abused.

Now, the criminal investigation is spilling over into civil court, where two of Frodsham’s adopted sons have filed separate lawsuits against the state for licensing David and Barbara Frodsham as foster parents in a home where they say they were physically and sexually abused throughout their lives.

These lawsuits provide further evidence that the State of Arizona has always known, and probably even participated in, the pedophile sex trafficking ring inside the Frodsham home, which is why they continued to allow the Frodshams to be a licensed foster parent.

In the latest complaint, 19-year-old Trever Frodsham says case workers missed or overlooked numerous signs that David and Barbara Frodsham were unfit parents. These included a 2002 sex abuse complaint filed with local police by one of the Frodshams’ biological daughters against an older biological brother, and the fact that David and Barbara Frodsham were themselves victims of child sex abuse.

Trever’s allegations echo those featured in an earlier lawsuit filed by his older biological brother, Ryan Frodsham, and one filed by Neal Taylor, both of whom were also adopted into the Frodsham household.

In an interview with the AP, Ryan Frodsham said his adoptive father began sexually abusing him when he was 9 or 10 years old and the abuse continued into his teens, when David Frodsham began offering his son’s sexual services to other men. “Makes me throw up thinking about it,” Ryan said.

In his lawsuit, Ryan Frodsham said the state was informed that David and Barbara Frodsham were physically abusing their children “by slapping them in the face, pinching them, hitting them with a wooden spoon, putting hot sauce in their mouths, pulling them by the hair, bending their fingers back to inflict pain, forcing them to hold cans with their arms extended for long periods time,” and refusing to let them use the bathroom unless the door remained open.

In his AP interview, Ryan said Barbara never sexually abused him but walked into the room where David was abusing him at least twice.

“She knew what was going on,” he said.

The lawsuits and related legal filings also say investigators with the Department of Child Safety and case workers with Catholic Community Services, which subcontracts foster and adoption work from the state, failed to effectively follow up on 19 complaints and attempted complaints regarding the Frodsham home spanning more than a decade.

The complaints began in 2002, when the Frodshams applied for their foster care license, and continued until 2015, when David Frodsham was charged with disorderly conduct and driving drunk with children in his car, prompting the state to suspend their license indefinitely and remove all foster children from their home, although the charges were later dismissed.

The lawsuits say the Frodshams’ adopted children attempted to report their own physical and sexual abuse without success.

For instance, Neal Taylor’s lawsuit says he attempted to report that David Frodsham was sexually abusing him in two phone calls to his case manager, both of which he placed from school.

The first time, the case manager reported the call to Neal’s adoptive mother, who “interrogated” him and “proceeded to punish” him, according to his lawsuit. The second time, the case manager refused to meet with him unless he disclosed the reason for his call over the phone, because he would have had to drive 90 minutes from Tucson to Sierra Vista for a private meeting.

Ryan Frodsham’s lawsuit and the related legal filings say he reported repeated alleged physical abuse by Barbara Frodsham to Sierra Vista police when he was 12 years old after running away from home.

Police photographed several bruises, returned him to Barbara Frodsham, and reported the incident to the state Department of Child Safety. Despite the photographs and a police report, a case worker who met with Ryan five weeks later found his allegations “unsubstantiated.” (Source.)

There is no way that something as horrible as this could be allowed to exist without participation in almost every level of government within the State of Arizona.

From social workers, to judges, to politicians and law enforcement, everyone has to either be complicit or too afraid to expose the corruption, in order for something like this to exist.

And it includes religious and private businesses as well, benefiting from the lucrative child trafficking system funded through foster care and adoption services.

In this AP story, they mention how this is happening at the border as well.

The Frodsham child sex abuse ring is part of a cluster of sex abuse cases that have come to light in Cochise County, Arizona, over the last several years, including several involving U.S. Border Patrol agents, two of whom worked at the Naco, Arizona, Border Crossing. Among them:

— John Daly III. A year ago, authorities arrested the recently retired Border Patrol agent after DNA evidence led them to suspect him in at least eight rapes, and to consider whether he is the so-called East Valley rapist, who terrorized women outside Phoenix throughout the 1990s. Prosecutors in Maricopa and Cochise counties have charged him with multiple counts of sexual assault and kidnapping. Daly, who is being held without bail, has pleaded not guilty.

— Dana Thornhill. A year ago, Thornhill was sentenced to a 40-year prison term after pleading guilty to years of sexually abusing his two children. Thornhill was charged following a stand-off with police in which he holed up in a local church. At the time, Thornhill was the chaplain at the Naco Border Crossing.

— Paul Adams. In 2017, Adams was charged with raping his two daughters, one of whom was just 6 weeks old; taking videos of the sexual assaults; and posting them on the Internet. Adams, who took his own life before standing trial, was also stationed at the Naco Border Crossing. (Source.)

When the occasional arrest is made in this evil system, such as this one with Frodsham, or the Mormon politician Paul Petersen, my guess is that the arrests probably involve “turf wars” where someone crossed a line in the evil child trafficking system and their competitors then used the law to put them away.

Law enforcement officials will then claim they are fighting this, all the while participating in it and protecting it.

The attorney for these victims of the Frodsam crimes, chose her words carefully, but you can easily read between the lines to see what she is probably implying.

Ransford believes the cluster of cases should be attributed to good police work and effective prosecution, which give victims and others the confidence to report child sex abuse. “People report because they know something’s going to be done about it,” he said.

But Cadigan, the attorney representing the Frodsham brothers and Neal Taylor, wonders whether child sex abuse in southern Arizona is on the rise. “Law enforcement has been very effective, and I appreciate their efforts, but I’ve been taking these cases for 30 years and I’ve never been so busy,” she said.

Read the full article at AP.