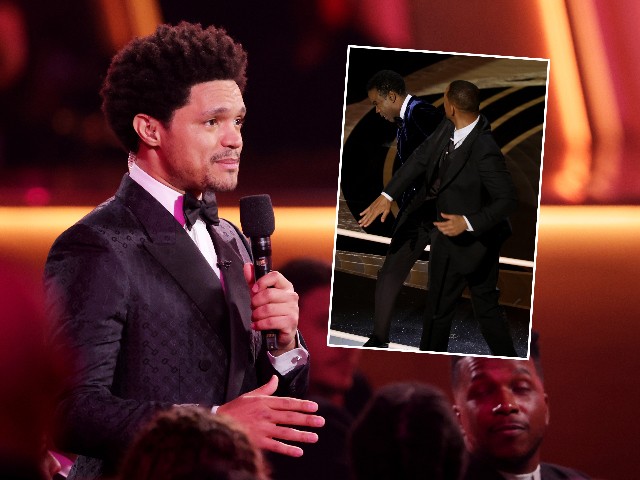 The mockery of actor Will Smith following his assault against comedian Chris Rock at last week’s Oscars telecast continued on Sunday at the Grammy Awards when host Trevor Noah cracked a joke at the embattled actor’s expense.

As he introduced Olivia Rodrigo for a performance of “Driver’s License,” Trevor Noah took a hit at Will Smith over last week’s slap barely 10 minutes into the show.

“Keeping people’s names out of our mouths” referenced Will Smith’s tirade at Chris Rock after the comedian cracked a joke about his wife’s, Jada Pinkett Smith’s, hair while presenting the award for Best Documentary Feature.

“We’re gonna be keeping people’s names out of our mouths.”

— Host Trevor Noah alludes to Will Smith at the #GRAMMYs pic.twitter.com/BXxM2iPPO9

“Keep my wife’s name out of your fucking mouth,” Smith twice-screamed at Rock.

Questlove, who won the Oscar immediately after Smith’s stunt, also referenced the slap while giving out the song of the year award. “I’m gonna present this award, and I trust that you people will stay 500 feet away from me,” he quipped, adding he was “just playing.”

Questlove: “I’m gonna present this award and I trust that you people will stay 500 feet away from me.” #GRAMMYs pic.twitter.com/DV2juQjnwM

“A duo bringing back the ’70s … which might explain all the inflation … Silk Sonic,” said Noah.

Leading up to the big night, Trevor Noah said that show would celebrate music artists as well as highlight hot-button political issues like the war in Ukraine.

“I think the show is going to find the right place and the right space to do something,” the Daily Show host said. “It’s one of those interesting balances in life we try to achieve, which is acknowledging what’s happening in the world whilst allowing yourself the grace to celebrate some of the moments that are also going on.”