Anthony Fauci announced Monday he is stepping down from his positions of Director of the National Institute of Allergy and Infectious Diseases (NIAID) and Chief of the NIAID Laboratory of Immunoregulation.

Fauci will also no longer be Chief Medical Advisor to Joe Biden.

After more than 50 years working as a government bureaucrat, Fauci will resign on his own terms in December.

And that’s a slap in the face to humanity.

Dr. Fauci is resigning because he knows Republicans are about to take back the House and potentially the Senate.

Fauci shouldn’t be allowed to resign with a pension funded by the taxpayers. Fauci should be fired, lose his pension, and face investigations over his COVID response.

Fauci shouldn’t get to resign on his own terms in December.

He should be removed NOW.

Watching Dr. Fauci resign and sail off into the sunset after making millions off the government is a slap in the face.

Millions of Americans suffered as a result of Dr. Fauci’s lies and tyrannical agenda. He deserves to be fired and investigated.

It’s no coincidence that Dr. Fauci just announced that he will resign from the government in December, which is right after Republicans will take back the House and immediately plan oversight into our pandemic response and his funding of gain of function research at the Wuhan Lab

Fauci should be investigated for Crimes Against Humanity.

Instead, he’ll be allowed to sail off into the sunset with a cushy government pension. 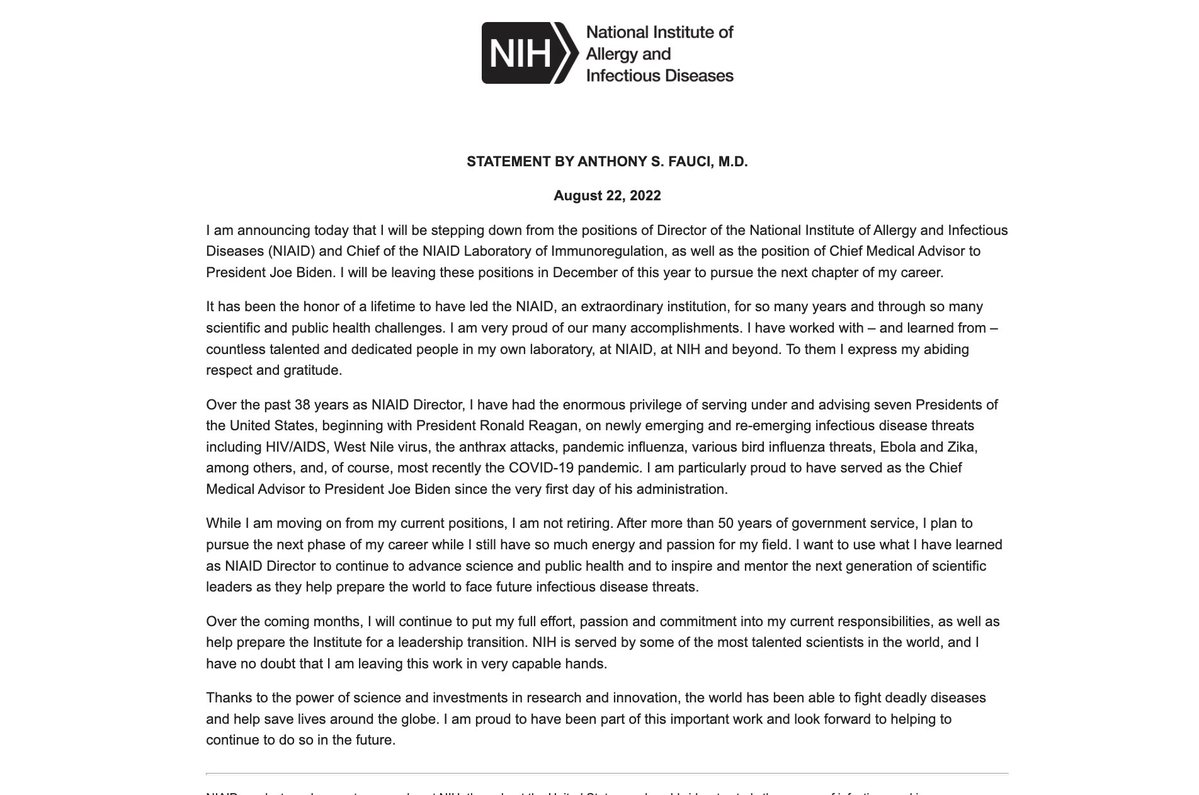 Unsurprisingly, Biden praised Fauci amid news of his upcoming departure.

Fauci has become a household fixture during the Covid-19 pandemic, battling back misinformation — sometimes from the highest levels of government. His steadfast commitment to science, challenging former President Donald Trump on everything from the use of  hydroxychloroquine to mask mandates, made him a quasi-celebrity in the process.

Fauci, who also runs the NIAID Laboratory of Immunoregulation, said he has no intentions of retiring.

“After more than 50 years of government service, I plan to pursue the next phase of my career while I still have so much energy and passion for my field,” Fauci said in a statement. “I want to use what I have learned as NIAID Director to continue to advance science and public health and to inspire and mentor the next generation of scientific leaders as they help prepare the world to face future infectious disease threats.”

Last month, the infectious disease expert told Reuters that he planned to retire by the end of Biden’s first term, but it could come much earlier than that.

“As he leaves his position in the U.S. Government, I know the American people and the entire world will continue to benefit from Dr. Fauci’s expertise in whatever he does next,” Biden said in a statement.

“The United States of America is stronger, more resilient, and healthier because of him.”

The United States of America is weaker, unhealthier, and beholden to Big Pharma because of Anthony Fraudci.

The nation would be better served with the lifelong bureaucrat nowhere near public health.