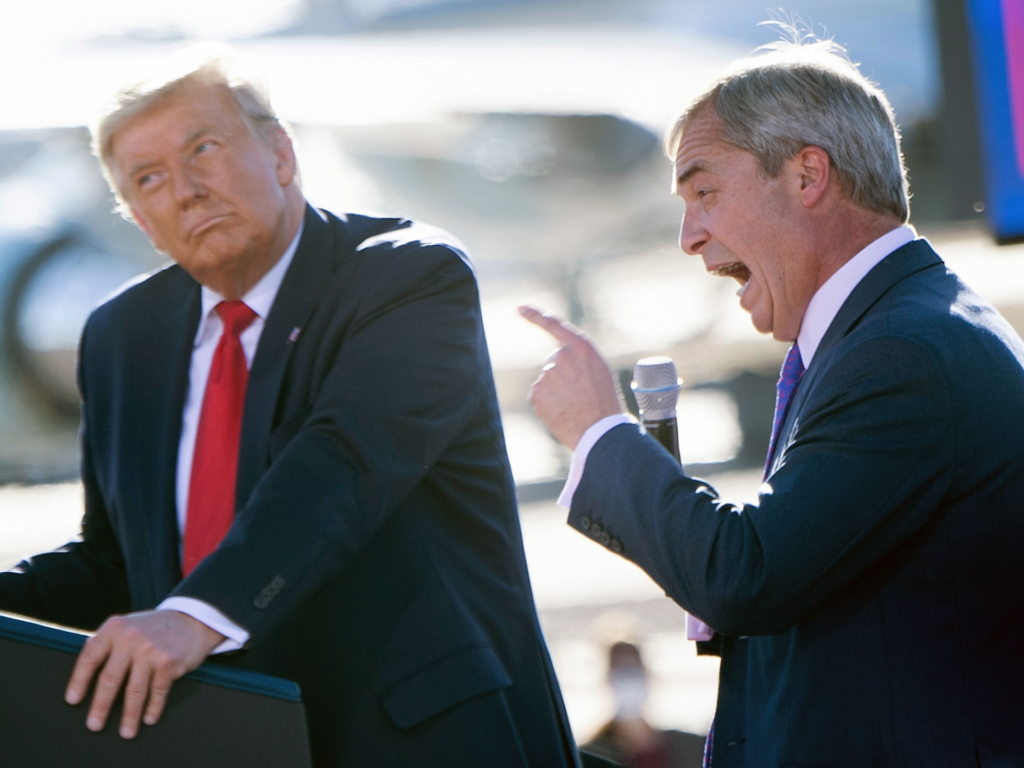 In a trailer released for an interview British transatlantic TV personality and journalist Piers Morgan conducted for Rupert Murdoch’s upstart UK television station TalkTV with Mr Trump, the video appeared to show the former president storming off in anger. However, audio recorded by Trump’s team provided to Breitbart News contradicted the narrative spun in the 30-second clip posted by Morgan.

In an article penned in another Murdoch media company, The Sun newspaper, Morgan hinted that ‘Mr Brexit’ Nigel Farage had provided a dossier of negative comments penned by Morgan in the British press about Trump, an accusation which Mr Farage confirmed on his YouTube channel on Thursday morning.

Morgan, in his typical hyperbolic fashion, claimed that Mr Trump was “foaming at the mouth” while reading out statements from the former Celebrity Apprentice winner, including that Trump had “morphed into a monster” and should be removed from office and barred from ever running for president again.

Nigel Farage, who has a prime time TV slot of his own on GB News in Britain — and therefore will be a competitor of Morgan’s new show — questioned if Donald Trump will ever be able to trust Morgan, or indeed any Rupert Murdoch owned media company again, including Fox News.

Holding up a copy of the front page of The Sun, which read “Grumpy Trumpy,” Mr Farage said that it was an example of “fake news”.

“[Trump] has been completely and utterly stitched up by Piers Morgan. It is disgraceful, it is disgusting. I bet Rupert Murdoch is absolutely fuming, why would Trump now trust Fox News or any Murdock media,” Farage said.

Confirming that it was indeed him who provided the former president with the dossier of comments from Morgan, Farage said: “I said to him Morgan has gone around boasting in UK media, telling everybody that he’s your friend that he’s got special privileged access, but in fact behind your back he’s been stitching you up for a long time if you do this interview here is the truth and I gave him a document.”

Audio provided by Trump’s team to Breitbart News of his interview with Piers Morgan proves Morgan’s team deceptively edited the interview to make it appear as though it had a contentious ending.

Listen to the audio, it’s shocking how badly it was edited: https://t.co/dz5BCJtjJX

In a statement linking to the audio published by Breitbart News, the former president said of the interview teaser: “Piers Morgan, like the rest of the Fake News Media, attempted to unlawfully and deceptively edit his long and tedious interview with me.

“He wanted to make it look like I walked out on the interview when my time limit of 20 minutes went over by an hour. The good news is that the interview was taped by us as a means of keeping him honest.”

Responding to the statement, Morgan failed to address the allegations of deceptive editing, with the TV host claiming that Mr Trump was only angered by him questioning the former president’s claim of election rigging in the 2020 race.

Morgan finally addressed the allegations in a response to Donald Trump Jr. who characterised the 30-second clip as “misleading and deceptive” and again linked to the Breitbart audio.

“I learned all my promo skills from you guys on Celebrity Apprentice! Nothing misleading or deceptive about it, Don – your dad just got very annoyed when I told him I don’t believe the 2020 election was rigged or stolen. Aside from that, it was a terrific interview,” Morgan replied.

Piers Morgan has a checkered history in media, from being fired from his role as the editor of the left-wing Daily Mirror over allegations of phone hacking — a charge he denies — and later being sacked from his prime time slot on CNN after suffering low ratings. Last year, he stormed off live on air and later quit his hosting role for Good Morning Britain over an argument about Meghan Markle and Harry.  His latest Murdoch-backed show is due to debut next week in the UK.