A Facebook bug on Wednesday morning filled user feeds with endless posts from celebrity accounts into crypto scams and PayPal requests, leading many to mock Mark Zuckerberg and the Masters of the Universe with silly posts that the platform happily spread far and wide.

The Verge reports that Facebook users experienced an extremely odd bug on Wednesday that saw their newsfeeds filled with endless posts from celebrity accounts. Users’ News Feeds were flooded with minor posts sent to pages for artists including Lady Gaga, Nirvana, and The Beatles. The issue appeared to be resolved after three hours of an unusable News Feed.

Facebook (now known as Meta) spokesperson Alexandru Voica took to Twitter to explain that the bug was the result of a “configuration change” and has since been resolved.

Earlier today, a configuration change caused some people to have trouble with their Facebook Feed. We resolved the issue as quickly as possible for everyone who was impacted, and we apologize for any inconvenience.

Users quickly realized that they could take advantage of the bug and send memes to celebrities that would then be shared widely across the platform. The Verge reports that one image that went viral was of a turkey sandwich with the caption: “If you see this share it to another celebrities Facebook page keep the turkey sandwich moving.”

Due to the bug, anyone that followed the celebrity account the picture was sent to saw it in their news feed. 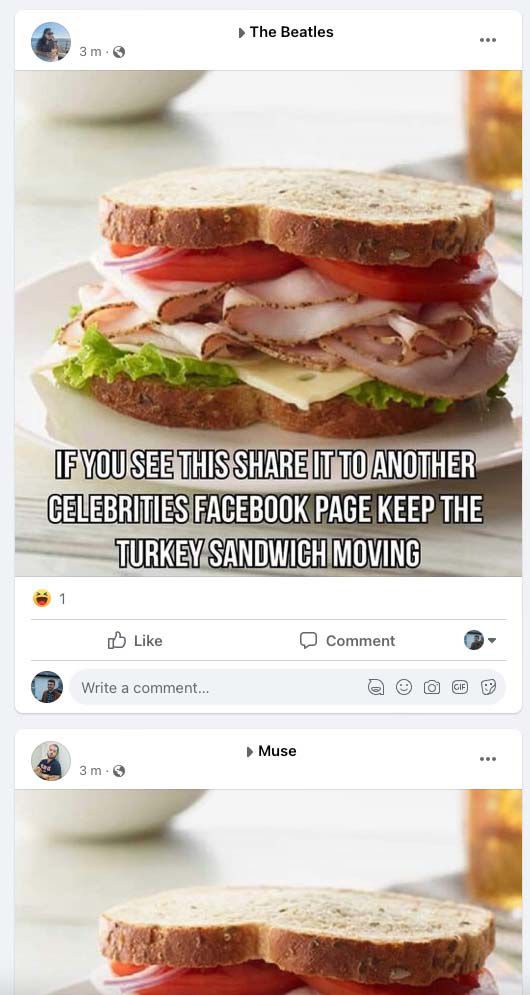 Others posted PayPal donation links and ads for cryptocurrency projects. Users took to Twitter to report the issue, with some posting videos of their celebrity-filled News Feeds.

It’s carnage out there folks pic.twitter.com/DgpmcwuiCn

Is anyone else’s Facebook broken or have I been hacked. This is my entire feed pic.twitter.com/nQwvtLqRjT

This morning Facebook pushed bad code to prod. Facebook users feeds are being inundated with messages to popular celebrities from individuals they do not know or follow. It has resulted in the social media website being virtually usable (more than before).

Read more at the Verge here.