Whitmer filed the suit with the Oakland County Circuit Court and, according to a press release from Whitmer’s office, the governor is using her executive authority to request that the Michigan Supreme Court intervene and “immediately resolve” her case.

Whitmer’s lawsuit comes in anticipation of a U.S. Supreme Court decision on Dobbs v. Jackson Women’s Health Organization, a major abortion case challenging a Mississippi law that would prohibit most abortions after 15 weeks of pregnancy.

The Dobbs case prompted the Supreme Court to revisit the landmark 1973 Roe v. Wade decision that declared abortion constitutional, and many pro-life advocates have expressed optimism that the court, which has a conservative majority, could overturn Roe and flip control of abortion laws back to individual states.

“If Roe is overturned, abortion could become illegal in Michigan in nearly any circumstance—including in cases of rape and incest—and deprive Michigan women of the ability to make critical health care decisions for themselves,” Whitmer claimed in a statement. “This is no longer theoretical: it is reality.”

Whitmer cited a 1931 state law that makes performing an abortion a criminal act except when a mother’s life is in danger. The law became unenforceable after Roe was decided, and Whitmer contended it could become enforceable again in the event that Roe is overturned.

“A near total abortion ban would rob women of their reproductive freedom and the ability to decide whether and when to have a child,” Whitmer said. 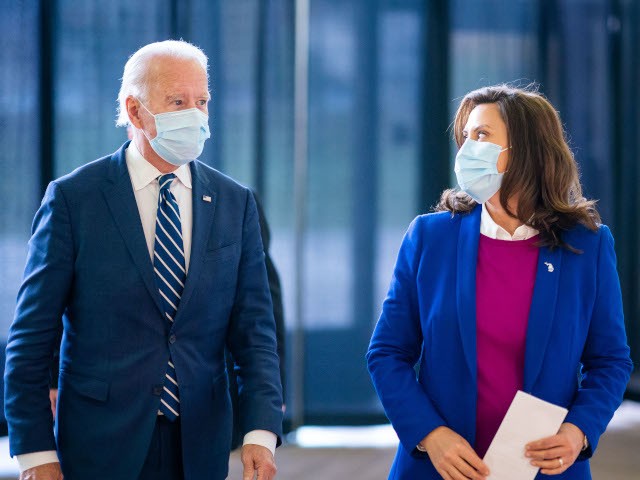 The Michigan Democrat also warned that a ban on abortions poses a threat to a woman’s “economic freedom.”

Whitmer said, “It also would rob women of their economic freedom and their right to decide whether to become a parent: the biggest economic decision a woman will make in her lifetime.”

“No matter what happens to Roe, I am going to fight like hell and use all the tools I have as governor to ensure reproductive freedom is a right for all women in Michigan,” Whitmer added.

The governor’s lawsuit occurred “almost in tandem” with a lawsuit filed in the Michigan Court of Claims by Planned Parenthood, the nation’s largest abortion vendor, seeking to deem abortions constitutionally sound under Michigan’s constitution and prevent prosecutors from enforcing the 1931 law that criminalizes performing abortions, according to the Detroit News.

Whitmer, who is facing a competitive reelection race this year, sent out a fundraising email right after her announcement soliciting campaign donations, according to a copy of the email shared by the conservative group Michigan Rising Action.

The group called Whitmer’s lawsuit a “choreographed publicity stunt” and noted that Whitmer ally Dana Nessel, the state’s attorney general, also made a “stunning admission” Thursday morning that she would not defend the 1931 Michigan abortion law unless forced to by a court.

Nessel reasoned in a statement, “I didn’t become attorney general so I could head an office that put women in a position in which some of them would likely die.”

Red states like Texas, Tennessee, Oklahoma, and others have moved to protect the unborn with legislation placing limitations on abortion, but Democrat governors, now including Whitmer, have sought the opposite.

Colorado Gov. Jared Polis (D) used his authority this week to codify unrestricted access to abortion in his state, while California Gov. Gavin Newsom (D) asserted the Golden State would become an abortion “sanctuary” should Roe be overturned.