A defense bill released Tuesday would force the Biden administration to rescind its COVID-19 vaccine mandate for troops in a huge victory for Republicans, military advocates, and families who pushed hard for it to be included in the bill.

“Not later than 30 days after the date of the enactment of this Act, the Secretary of Defense shall rescind the mandate that members of the Armed Forces be vaccinated against COVID-19,” the bill says. 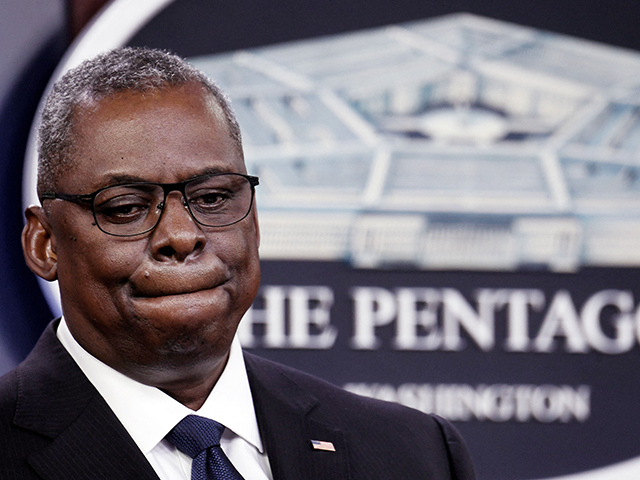 Defense Secretary Lloyd Austin speaks to the press on August 18, 2021, at the Pentagon in Washington, DC. (Photo by OLIVIER DOULIERY/AFP via Getty Images)

The Biden administration’s military vaccine mandate to get fully vaccinated or face discharge resulted in more than 8,000 troops being kicked out of the military.

However, the mandate threatened the livelihoods of an estimated 60,000 more service members who did not wish to take the vaccine.

Thousands of those had filed for religious exemption from the vaccine, but their requests were largely dismissed, prompting a warning from the Pentagon inspector general.

Despite the pushback from troops and Republicans in Congress, the Biden administration had dug in its heels, saying as recently as this week that it opposed repealing the mandate.

The bill must be passed by Congress and sent to be signed by President Joe Biden to become law, but it is likely it passes since it was worked out over weeks by both Republicans and Democrats on the House and Senate Armed Services Committee.

The language did not include reinstatement of troops discharged over the mandate, but Rep. Thomas Massie (R-KY), a key House member opposing the mandate tweeted that the “next steps” are to “reinstate all members of the military wrongfully terminated due to vax.”

Next steps: end all COVID vax mandates (healthcare workers and foreign visitors), and reinstate all members of military wrongfully terminated due to vax.https://t.co/hRVftUh6yl pic.twitter.com/o8noBxngGe

Rep. Chip Roy (R-TX), who also pushed for rescinding the mandate tweeted, “The @freedomcaucus has been fighting to #EndVaxMandates for 2 years – this is a giant step, at least within the military.”

The @freedomcaucus has been fighting to #EndVaxMandates for 2 years – this is a giant step, at least within the military. The #NDAA remains highly flawed – and we need reinstatement, cleared records, & anti-retaliation language… but HOPEFULLY this step stays in the bill. pic.twitter.com/JjAIGHg5YY

In the United States, the number of new servicemembers joining the military is reaching a near record low. The United States needs a strong military to protect our country against the growing threats facing our nation. We are pleased that the final conferenced bill includes language mirroring our amendments’ efforts to protect troops from being fired due to Biden’s COVID vaccine mandate without fair appeal and to the harm of service readiness.

Another group of Republican senators also made a high-profile push last week — threatening to vote against the NDAA if it did not include a repeal of the vaccine mandate, as reported by Breitbart News.

I’m very relieved for my fellow brothers and sisters in arms as this will save roughly 70,000 careers. I’m also disappointed however, that it does nothing to repair the damage that has been done to the 8,000+ service members, and their families, who were kicked out over this ill formed mandate.