“The governor [of Tamaulipas] will provide enhanced border security enforcement measures on the Mexico side of the border, both in ports of entry as well as along the Rio Grande River to prevent illegal immigration from Mexico into Texas,” Abbott said Friday as he ended the trade-blocking safety inspections of Mexican trucks into Texas.

“If those crossings resumed — or increase — it will signal the cartel-supported crossings have increased and that Texas must reinstate the more stringent vehicle-inspection standard,” he said.

“We are showing how border governors can lead the way on solving border problems,” Abbott said after using the threat of trade blockades to forge deals with four Mexican state governors. 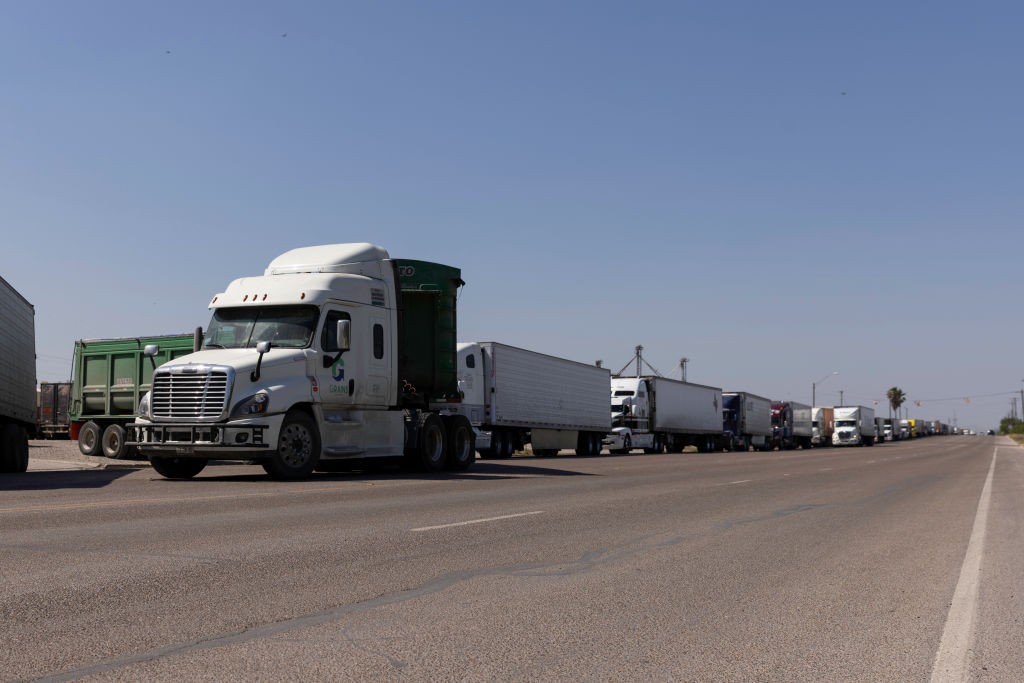 Hundreds of commercial trucks wait in line to cross the Progreso International bridge into Mexico on April 13, 2022, in Progreso, Texas. (Michael Gonzalez/Getty Images)

“It remains to be seen how successful this effort of his will be, but clearly it’s an initial success,” responded Mark Krikorian, director of the Center for Immigration Studies. “It’s perplexing why there hasn’t been more real coverage of it … I’m not familiar with something of this scale happening before,” he added.

The silence might have been caused by conflicted political staff in the White House hoping that someone or something would give them political cover to extend the popular Title 42 border barrier that is hated by the party’s pro-migration wing, he said. Border officials are letting many migrants through that Title 42 barrier now — roughly 80,000 of 220,000 in March, for example — and are scheduled to lift the barrier by May 23.

“It is rather astonishing that a Mexican Prez … (who says to care a great deal about sovereignty) allowed Abbott to bully up individual Mexican state governors (by choking the US/MX supply chain) & forcing them to implement security measures,” said in a Friday tweet by a D.C.-based Mexican journalist, José Díaz Briseño.

5/ The “deals” between Abbott & the Mexican border state Govs include policies already implemented. The only “new” one would br the directive for Chihuahua & Coahuila to respond to border hotspots identified by Texas DPS. Can this happen without first coordinating w/MX City & DC? pic.twitter.com/5HPtUy4pwc

On Monday, Mexico’s president briefly commented on the deals won by Texas. “Legally they can do it, but it’s a very despicable way to act,” said Mexican President Andres Manuel Lopez Obrador.

Abbott’s coup “has received surprisingly little mass media coverage for being a state governor directly interfering with international trade policy,” a pro-migration media site said on Friday. “It’s no secret to anyone that Abbott’s got broader political ambitions,” the Border/Lines site added.

The U.S. corporate-run media reported Abbott’s win as an Abbott defeat — and played up business claims of massive economic damage in the United States  — despite four Mexican governors signing anti-migration deals in exchange for easier truck traffic into Texas.

“Texas Gov. Greg Abbott (R) said Friday that there were no longer any secondary inspections of trucks crossing into his state from Mexico, announcing the end of a policy that had created multi-mile backlogs and that critics alleged had cost them millions of dollars in losses because key trade routes had ground to a halt,” the Washington Post reported April 15.

Down in the eighth paragraph, the Post‘s editors acknowledged:

On Wednesday, Thursday and Friday, Abbott met with governors from a number of Mexican states that use Texas ports to import goods, hashing out deals that exchanged the cessation of his additional inspections for enhanced border security on the part of the Mexican government.

“Texas Gov. Greg Abbott on Friday repealed his traffic-clogging immigration order that backed up commercial trucks at the U.S.-Mexico border, after a week of intensifying backlash and fears of deepening economic losses,” the Associated Press reported on Friday.

The AP mentioned Abbott’s success in the fourth paragraph, saying he “fully lifted the inspections after reaching agreements with neighboring Mexican states that he says outline new commitments to border security. ”

“There is no state official doing more damage to the nation than Greg Abbott. Of course, being governor of Texas gives you more than a leg up in that regard,” Esquire magazine vented on Friday from New York City.

“The [establishment] media all play from the work often the same [Democratic] playbook,” said Rob Law, a former official at the U.S. Citizenship and Immigration Services agency. “There’s no independent voice saying, ‘Oh well, this is interesting that the governor is doing what’s the federal government is supposed to be doing or anything like that,” said Law, who now works with Krikorian at the Center for Immigration Studies.

Some media outlets poured cold water on the Abbott deals by noting that Mexican governors are implicated in the massively profitable trafficking of labor to the Biden’s administration. For example, the Texas Tribune reported;

Cabeza de Vaca, the Tamaulipas governor, has been linked to organized crime by the U.S. Department of Justice, according to Mexico’s attorney general’s office. Mexico prosecutors have also charged him with money laundering and tax evasion. He has denied any wrongdoing.

De Vaca talked a good game in the Friday deal-signing with Abbott, saying:

Organized crime pays no attention to the border, which is why we have these issues in both countries. Human smuggling has become a billion-dollar business. As things stand today, there’s no end in sight. I mentioned these things because the main subject of why we’re here today is security.

Security on the ports of entry and between the ports of entry — that takes cooperation and commitment and efforts of all of us. And though we have worked with the Texas Department of Public Safety for various operations, we must renew our efforts to continue working together, between Texas and [the state of] Tamaulipas to help solve these issues.

Immigration control is a federal issue, but I will always commit [to] a system where we can do what we have to do. Ultimately, it will also benefit the people of Tamaulipas. We don’t want organized crime in my state any more than you do. This is not an easy task. We don’t have only nine miles of border and one border crossing, like my neighbor [Mexican state] to the west. We have over 230 miles of border with eighteen boarding crossings. We’re talking about 50 percent of the commerce that goes between the Mexico and United States … We’re not only neighbors, we’re business partners, we’re allies, and many of us, our family is living on both sides.

But Abbott played up his win on Friday, knowing that he helped himself in his gubernatorial re-election campaign and also boosted his national profile before the 2024 race:

Texas will not tolerate the endless stream of illegal immigrants crossing the border and we will increase our border security in light of President Biden’s decision to eliminate Title 42 expulsions. The ultimate way to end the clogged border is for President Biden to do his job and secure it. Until then, Texas will use its own strategies to secure the border. 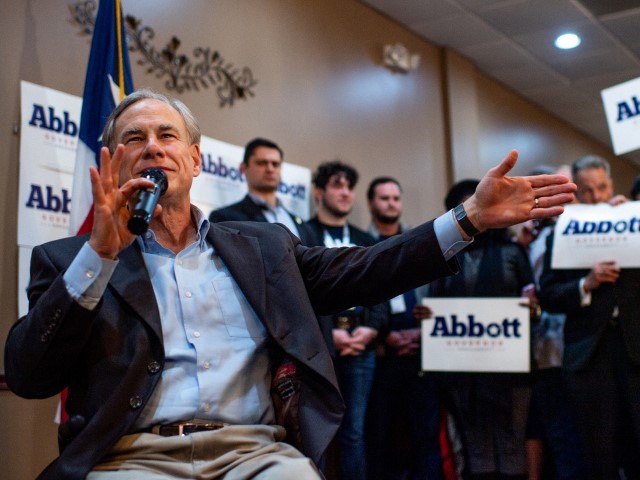 Texas Gov. Greg Abbott (R) speaks during the ‘Get Out The Vote’ campaign event on February 23, 2022, in Houston, Texas. Gov. (Brandon Bell/Getty Images)

“If there is not a slowdown in illegal immigration, there will be a reimplementation of 100 percent inspection of all commercial vehicles,” Abbott said, adding:

A consequence of that is financial pain, and that financial pain is necessary to get the public to insist that their government leaders — such as the presidents of the two countries involved — take the action that is needed to solve this problem.

In March, Biden’s border agency counted 220,000 arrivals at the border and allowed 80,000 migrants into U.S. jobs, homes, jobs, and schools.

Since at least 1990, the D.C. establishment has used a wide variety of excuses and explanations — for example, “Nation of Immigrants” — to justify its economic policy of extracting tens of millions of migrants and visa workers from poor countries to serve as legal or illegal workers, consumers, and renters for various U.S. investors and CEOs.

The self-serving economic strategy of extraction migration has no stopping point. It is brutal to ordinary Americans because it cuts their career opportunities, shrinks their salaries and wages, raises their housing costs, and has shoved at least ten million American men out of the labor force.

The extraction process is also brutal to migrants — and lethal to many.