Cuba Experienced over 200 Protests in March


Protesters convened 232 assemblies against the Communist Party in Cuba throughout March, over half of them specifically demanding an end to the repression of civil and political rights, the Cuban Observatory of Conflict (OCC) revealed in a report on Monday.

The number represents a modest increase from the 207 protests the NGO documented within Cuba in February – and a reminder to the world that civil dissatisfaction and calls for an end to the 63-year-old communist regime in the country have increased, not diminished, since the wave of national protests that rocked the country on July 11, 2021.

The protests in July reportedly occurred simultaneously in hundreds of municipalities and attracted an estimated 187,000 people, all calling for freedom and the fall of the Castro regime. The protests resulted in a wave of heavy coverage of the Cuban freedom movement for some weeks in the United States, but the subsequent wave of terror the Communist Party implemented to disappear the protesters and silence anyone who may have been inspired to join the movement did not receive similar attention. The administration of President Joe Biden has not at press time revealed any coherent foreign policy strategy to deal with America’s neighbor 90 miles to the south.

The OCC, an NGO that tracks dissident activity and political repression in Cuba, said in its report that the Castro regime “has implemented a policy of extreme terror” in the aftermath of the July 2021 protests in an attempt to retain its stranglehold on power, but it has failed to silence “the frustration over the internal generalized crisis and lack of freedoms, as well as the disproportionate sentences and other abuses against [July 11] protesters.” The group reported it had documented 2,267 protests between July 2021 and March 2022. 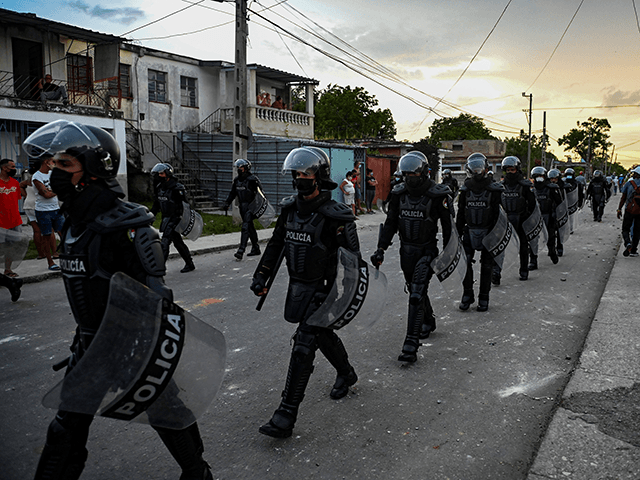 Riot police walk the streets after a demonstration against the government of President Miguel Diaz-Canel in Arroyo Naranjo Municipality, Havana on July 12, 2021. (YAMIL LAGE/AFP via Getty Images)

Cubans have for decades endured extreme poverty – while members of the Castro family boasted of eating lobster, driving fancy cars, and collecting luxury watches – due to the Communist Party raiding government coffers for the personal benefit of its leaders. Gross mismanagement of critical industries such as agriculture have also left Cubans struggling to feed their families, subjected to a ration card system that requires many to live off of rancid meat and stale bread. The Chinese coronavirus pandemic devastated one of Cuba’s key economic sectors, tourism, adding to the strain.

While some, including members of the Biden administration, tried to blame the July protests on discontent stemming from the pandemic, little evidence from the actual statements that protesters made that day suggests that this was the case. The subsequent protests documented, OCC explained this week, were also explicit calls for political freedom and an end to communism. Of the 232 protests in March, 134 explicitly addressed “political repression and abuse.”

OCC referred to Cuba as a “social bomb with a short fuse,” arguing that “the psychology of the population is not today what it was before the social explosion of July 11” and citizens are less hesitant to express discontent publicly.

Many of the protests this month addressed the ongoing trials of individuals arrested on July 11, 2021, for protesting against the regime or being found near the vicinity of a protest. The Communist Party is believed to have arrested thousands of people – though no concrete tally exists at press time, as the regime often fails to formally charge political dissidents so as to not count them among political prisoners – over the protests and has processed them through mass trials featuring as many as 30 people sentenced at a time. The government has announced sentences of decades in prison for some of those convicted of participating in the protests, among them children and individuals whose families say had documented mental health conditions.

Cuban prosecutors have indicted civilians following the protests for “crimes” like “vandalism,” “sedition,” and “disrespect” (desacato), a Cuban violation essentially used to mean disagreement with the government in any form. Children under 18 have received sentences as high as 19 years in prison.

Others have been arrested following the protests for using social media to express opposition to the government, even when no evidence suggests they participated in any protest in the real world. On Monday, the independent Cuban outlet 14 y Medio reported that three young men were sentenced to up to five years in prison for discussing the protests in a WhatsApp group. Leodán Pérez Colón, 22 and sentenced to five years in prison, had invited friends to a WhatsApp group titled “All for Liberty” and tried to organize protests. He was also convicted for a social media livestream in which he allegedly hurled various profanities at Miguel Díaz-Canel, the figurehead “president” of the Castro regime.

Cuban Prisoners Defenders, an NGO that logs human rights abuses on the island, revealed in a report last week that the Castro regime is using systematic torture tactics on those arrested following the July protests. The group surveyed 101 prisoners and their relatives to find that police subject dissidents to, among other abuses, “forced labor,” “deprivation of medical care,” “solitary confinement,” sleep and food deprivation, and “humiliation, degradation and verbal abuse.” Several of those surveyed hold foreign citizenship, which Cuban Prisoners Defenders noted has made little difference in their treatment.

“Except for the United States, the rest of the countries, Spain, Canada and Germany, to give three examples, have so far left their citizens without any protection whatsoever,” the group observed.