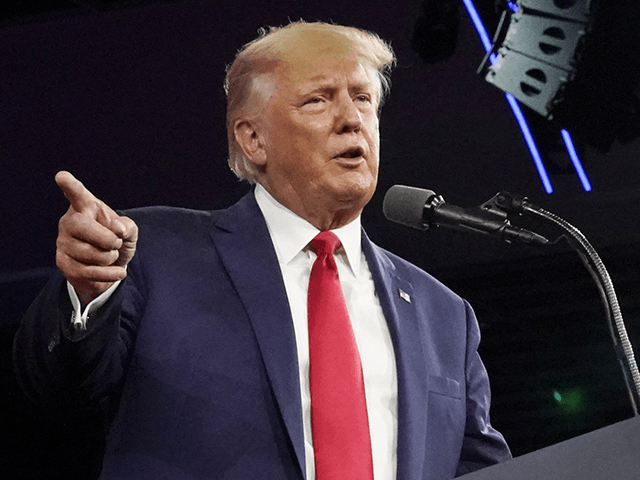 Former President Trump delivered the keynote speech at the Heritage Foundation’s annual leadership conference at the Ritz-Carlton on Thursday where he addressed a range of issues, chief among them being the radical left’s destruction of the American economy via the “Climate Hysteria Hoax.”

“One of the most urgent tasks not only for our movement but for our country is to decisively defeat the Climate Hysteria Hoax,” the president said to the room of supporters.

The president highlighted how the radical environmentalist movement has morphed from a fringe belief among America’s youth into an insidious cause that is now actively “destroying America’s economy, weakening our security, and eviscerating our Middle Class.”

“The deranged ideology of the Green New Deal is a massive self-inflicted economic wound,” the president said. “It is helping fuel runaway inflation. It is causing the cost of food, cars, housing, and raising a family to skyrocket.”

Worst of all, the president added, is how America’s lack of energy independence has put the country at “the mercy of Iran, Russia, Venezuela, and other hostile foreign nations—all while we are sitting on oceans of liquid gold right under our feet.”

These catastrophic predictions and theatrical hysterics have become an effective tool to “gain power and control over the entire society,” according to the president.

“Conservative leaders, think tanks, and intellectuals must be FEARLESS in calling out this lunacy,” he argued. “The world is not ending. Our future is not dying. We have to defeat the Climate hoaxsters once and for all.”

“They said we only had twelve years to live, four years ago,” he concluded. “That means we only have eight years left. That’s ridiculous.  The real problem is nuclear weapons.  That’s the only global warming that will be meaningful, and meaningful at a level that has never been seen before.”

Later in his speech, the president said how the Democrats and President Biden want to keep America in fear of the coronavirus with mask mandates to continue policies that enable them to cheat in elections. He also called for a rebirth of “America First” policies.

“America is facing dark times and tremendous plight due to the radical shift away from America First,” Trump said. “However, America’s greatness is not lost if we act with purpose. We can and must turn this around to save America.”