China’s central government on Monday was “ramping up” efforts to prevent an ongoing heatwave and drought from ruining much of the nation’s autumn grain harvest across China’s southern region, the Global Times reported, noting that the autumn grain harvest in jeopardy contributes 75 percent of China’s annual grain production on average.

China’s record-breaking heatwave began in mid-June and has since caused much of the country’s central and southern regions to experience drought conditions.

For autumn grain irrigation, reservoirs in the upper reaches of the Yangtze River are involved to cope with the drought and water shortage, supplying 1.48 billion cubic meters of water downstream [.]

To ensure grain production, the Ministry of Agriculture and Rural Affairs dispatched 25 working groups and 12 scientific and technological teams to help alleviate drought [.]

The meteorological departments are monitoring the growth of autumn grains and will arrange the nation’s high-performance aircraft at the right time to make it rain across different regions[.]

China’s central government has allocated roughly 300 million yuan ($44 million USD) toward drought and disaster relief in support of the initiatives so far, the propaganda outlet claimed.

“The key to achieving a full-year harvest of food depends on the autumn grain, which accounts for 75 percent of annual grain production,” Jiao Shanwei, the editor-in-chief of the Chinese agriculture news website cngrain.com, told the Global Times on August 20. 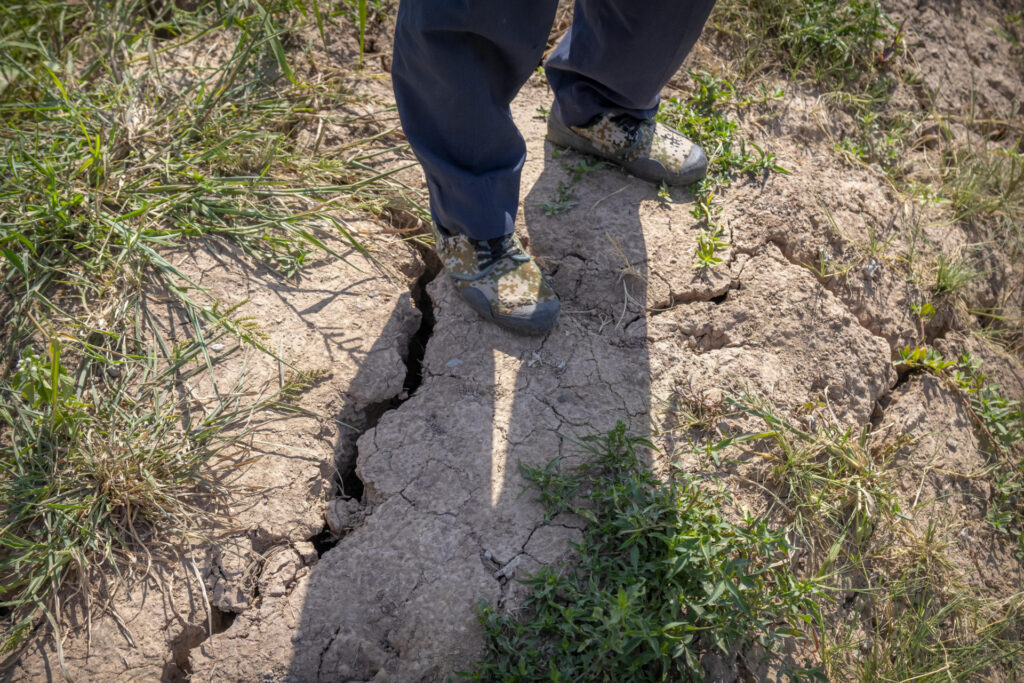 A farmer stands above a deep crack in the dried mud of an earthen embankment in his rice fields on the outskirts of Chongqing, China, Sunday, Aug. 21, 2022. (AP Photo/Mark Schiefelbein)

Some Chinese provinces reliant on hydropower to fuel their electric grids have suffered from limited power supplies or rolling blackouts in recent weeks due to low water levels at source rivers. One such province, Sichuan, recorded a drop in its daily capacity for hydropower generation on August 20 of 55.1 percent. Sichuan contains a stretch of the Yangtze, which is China’s longest river, and thus depends on hydropower for roughly 80 percent of its energy supply. Sichuan is currently experiencing the “least precipitation in [its] history,” according to the Global Times.

Chongqing, a municipality located within Sichuan province, reported multiple wildfires in its mountainous zones over the weekend that required state emergency responses, Xinhua reported on August 22.

“Over 5,000 rescue personnel, including firefighters, armed forces, and professional rescue teams, as well as seven helicopters have been mobilized to put out the fires. More than 1,500 people have been evacuated to safe places,” according to China’s official state press agency.

The Global Times on Monday relayed the following concerning the potential of southern China’s drought to devastate the nation’s overall food supply:

The mid-late August is a key period for autumn grain corps to grow in the middle and lower stream of the Yangtze River […] the persisting heat wave plus drought will reduce the yield of crops such as corn and soybean. […] [A]reas with well-functioning irrigation systems can help crops resist the impact of drought, places without irrigation system may bear more impact of the extreme weather.

The Ministry of Agriculture and Rural Affairs held a conference on Friday saying that local governments should continue to spray drought-resistant and water-retaining agent in areas lacking irrigation and watering conditions. For the more severely affected areas, localities should harvest early and develop regenerated rice or late-autumn crops.

China’s agricultural irrigated land accounts for half of the country’s total arable area and yields “75 percent of the nation’s grains and 90 percent of economic crops,” according to 2021 data from China’s Ministry of Water Resources cited by the Global Times on August 22.