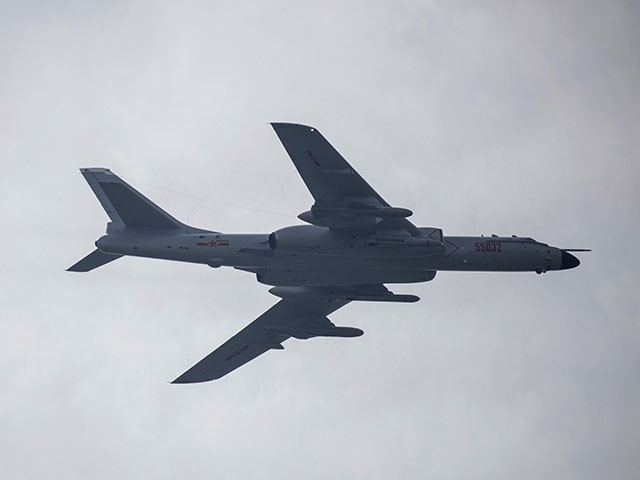 China’s military deployed its “most powerful bombers” to conduct drills near Taiwan on Wednesday just 48 hours before U.S. President Joe Biden embarked on a six-day East Asia tour on Friday in what observers believe may have been a show of defiance against Washington’s support of Taipei’s sovereignty, China’s state-run Global Times reported on Thursday.

China’s People’s Liberation Army Navy (PLAN) “sent its most powerful bombers” to conduct exercises over the West Pacific Ocean on May 18, according to the newspaper. The fighter aircraft joined a PLA Liaoning aircraft carrier group, which has staged near-daily drills in the area since at least May 2.

“Two Chinese military H-6 bombers on Wednesday entered the Pacific Ocean after flying in from the East China Sea and crossing between the Okinawa Island and the Miyakojima. After circling in the region, the bombers returned on the same flight path,” the Global Times quoted Japan’s Ministry of Defense Joint Staff as saying.

Chinese vessels have regularly intruded into the waters directly surrounding the Senkakus, which China refers to as the Diaoyu, for years though especially in recent weeks. The same is true of China’s hostile treatment of nearby Taiwan, which suffers from incessant Chinese air sorties that violate its air defense identification zone (ADIZ) almost daily.

Japanese Defense Minister Kishi Nobuo on May 10 described a six-day Chinese military operation off of Ishigaki Island (part of Okinawa Prefecture) from May 2 to May 8 as “the closest ever to Japan to date.” Kishi further revealed that Chinese fighter jets and helicopters carried out “more than 100 landings and takeoffs” from the PLAN’s Liaoning aircraft carrier during the nearly week-long exercises.

The PLAN had positioned its Liaoning aircraft carrier in strategic waters about 99 miles south of Ishigaki Island for the 18th straight day at press time on Friday. Ishigaki Island is located roughly 200 miles east of Taiwan. The United States, though not an official diplomatic ally of Taiwan, does provide the sovereign island nation with unofficial support. The U.S. Navy sporadically deploys vessels to sail through the Taiwan Strait, which separates Taiwan from China, in a show of solidarity with Taipei.

Biden arrived in Seoul, South Korea, on May 20 as part of a six-day tour of East Asia that is scheduled to include a visit to Japan. The American leader is expected to lead discussions between his South Korean and Japanese counterparts that will encourage the nations to work with Washington to counter China’s increasing presence in the Western Pacific region.

The Chinese Communist Party-run Global Times on May 19 provided the following analysis of the message likely sent by Beijing to the U.S. by ramping up its military drills near Taiwan so close to Biden’s arrival in East Asia:

It is widely believed by analysts that the drills by the Liaoning aircraft carrier group at this strategically important location – east of the island of Taiwan and south of Japan […] sent a powerful warning to Taiwan secessionists and external interference forces at a time when reports suggested Japan and the US were set to affirm boosting cooperation over the Taiwan question and compare it to the Ukraine crisis in a joint statement at an upcoming bilateral summit, analysts said.

Beijing considers Taiwan a province of China and has repeatedly vowed to “reunify” the island nation with China in recent months.