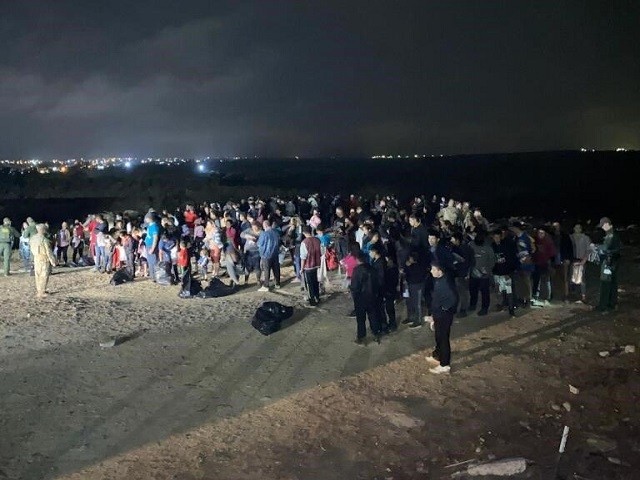 Border Patrol officials report that agents apprehended nearly 210,000 migrants who illegally crossed the southwest border with Mexico in March. The apprehensions mark a new record for the Biden administration as they move closer to ending the Title 42 migrant expulsion program.

U.S. Customs and Border Protection sneaked out the March Southwest Land Border Encounters report after the close of business on Monday evening. The report confirms a Breitbart Texas report from April 1 revealing that agents apprehended more than 209,000 migrants in March. The official report lists the count at 209,906 migrants apprehended by Border Patrol agents after they illegally crossed the southwest border between ports of entry.

The apprehension of nearly 210,000 migrants in March marks a 32 percent increase over the February report. It also represents an increase of 24 percent over March 2021. This is the largest number of migrant apprehensions since President Joe Biden took office in January 2021. It is the highest recorded number of March apprehensions since the last year of the Clinton administration in 2000.

With the exception of the Laredo Sector, every sector along the southwest border witnessed a marked increase in the number of migrant apprehensions in March. Those increases ranged from 31 percent in the El Centro Sector to nearly 590 percent in the Yuma Sector. The Laredo Sector reported a 0.4 percent drop.

CBP officials released the record-setting Biden-era report after close-of-business on Monday. Officials report that single adults accounted for 76 percent of all migrant apprehensions. The 169,062 single adult apprehensions shows a spike of 33 percent from February’s report.

Unaccompanied Alien Children accounted for only 14,167 of the total apprehensions in March. This represents an increase of 18 percent over the February report. Family units accounted for 26,721 — a 42 percent increase over February.

With plans for ending the Title 42 coronavirus protection protocol in late May, officials are bracing for an increase in migrant crossings.

“While we may likely see an increase in encounters after the CDC’s Title 42 Public Health Order is terminated on May 23rd, CBP continues to execute this Administration’s comprehensive strategy to safely, orderly, and humanely manage our borders,” CBP Commissioner Chris Magnus said in a written statement released Monday night. “CBP is surging personnel and resources to the border, increasing processing capacity, securing more ground and air transportation, and increasing medical supplies, food, water, and other resources to ensure a humane environment for those being processed.”