A federal appeals court ruled on Tuesday local governments in California can sue oil companies in state courts for allegedly causing climate change and hiding it from the public.

The suit, which dates back to 2017, is seeking damages for more than 30 companies, which the anti-oil San Francisco Chronicle said fossil fuels producers “profit from products contributing to rises in temperatures and sea levels.”

And that means climate change is forcing cities and counties in the state to spend more money on infrastructure, including sea walls.

The plaintiffs in the case are San Mateo, Marin and Santa Cruz counties and the cities of Richmond, Santa Cruz and Imperial Beach in San Diego County.

The local governments sued in state court under California’s law allowing damages for a “public nuisance,” private actions that harm the public health. The companies want the case to be heard in federal court, where judges can consider state laws but are generally less receptive to those laws than state courts, and are more likely to dismiss such suits.

U.S. District Judge Vince Chhabria of San Francisco and the Ninth U.S. Circuit Court of Appeals ruled initially that the suits raised no issues of federal law and belonged in state court. The Supreme Court told the appeals court last year to reconsider its ruling after ordering another court to review possible federal issues in a similar suit by the city of Baltimore. On Tuesday, the Ninth Circuit panel said it had considered all applicable federal laws and reached the same conclusion.

The suits contend the oil companies’ “wrongful conduct in producing, selling, marketing fossil fuels contributes to global warming and sea-level rise, which led to property damage and other injuries” to the cities and counties, Judge Sandra Ikuta said in the 3-0 ruling. While the companies produced some of the oil as federal government contractors or on federal land, Ikuta said, they did not carry out government orders or policies, and none of their actions implicated federal laws.

“It is time to go to trial to hold these defendants accountable for deceiving consumers about the damages associated with the use of their products, and to protect our taxpayers from having to bear the enormous costs resulting from that deception,” a statement issued by Marin and Santa Cruz counties and the cities of Santa Cruz and Imperial Beach, said.

Richard Wiles, president of the Center for Climate Integrity, called it “a major victory for these California communities seeking their day in court against corporate polluters that spent decades lying about their products’ role in fueling the climate crisis.”

Chevron, the lead defendant in the case, condemned the decision. 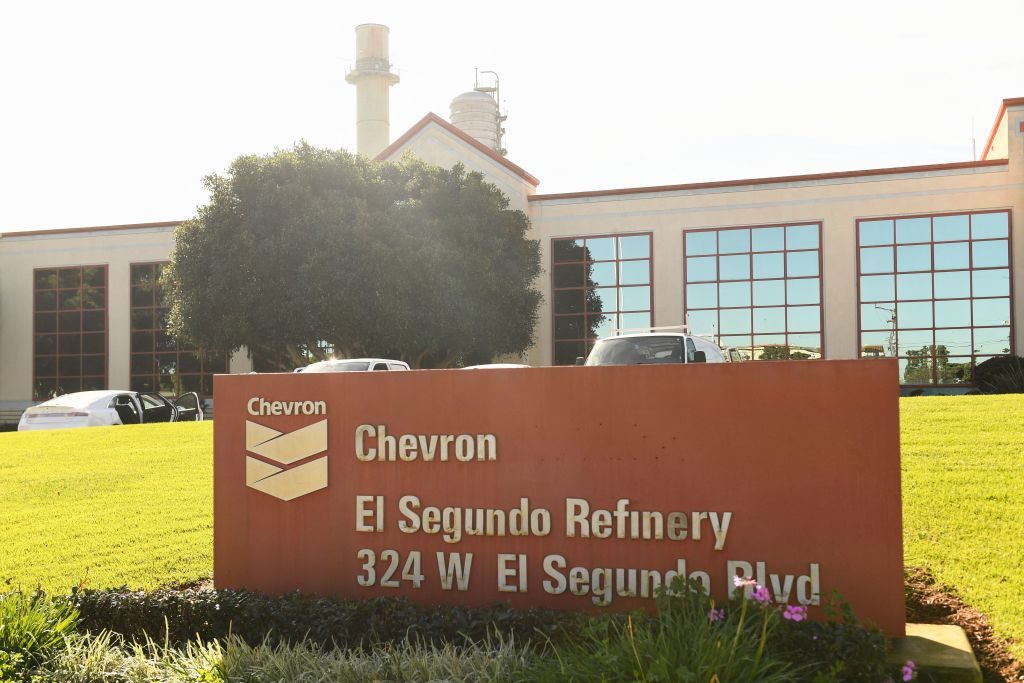 The Chevron logo is seen on the address sign outside the Chevron Products Company El Segundo refinery on January 26, 2022 in El Segundo, California. (PATRICK T. FALLON/AFP via Getty Images)

“Plaintiffs’ claims are based on allegations about worldwide carbon emissions and address global climate change — national and international issues that can be governed only by federal, not state, law,” Braden Reddall, spokesperson for Chevron, said. “Although the court has decided that plaintiffs’ claims for now can proceed past this preliminary stage, Chevron looks forward to additional challenges that should put an early end to this meritless lawsuit.”

The oil companies noted some of the drilling being demonized takes place on the Outer Continental Shelf, which are waters regulated by the federal government. But the court said local governments are not claiming harm to the land but that there is harm caused by the products that are made from fossil fuels.

The case is County of San Mateo v. Chevron, No. 18-15499 in the United States Court of Appeals for the Ninth Circuit