Bushfires Add to Pressure from Drought in China


Bushfires have reportedly engulfed “several mountains” in Chongqing, a municipality within southern China’s Sichuan province, in recent days, the Global Times reported on Monday, noting that the wildfires have merely exacerbated an ongoing heatwave and drought across most of China’s southern region that began in June.

The sizzling temperature, along with dry weather, has triggered bushfires in several districts in Chongqing since Thursday [August 18]. The government has dispatched 5,000 firefighters, police and volunteers to put out the fires; seven helicopters were also mobilized to join the operation, and the government has transferred 1,500 people out of danger zones, according to the municipal publicity department.

The bushfires were kept under control so far, and no casualties were found, the department said on Monday [August 22].

Chongqing is a sprawling municipality that contains the city of Chongqing and additional cities nearby. The urban center is home to an estimated 16.9 million residents and is located at the confluence of China’s Yangtze and Jialing rivers. The Yangtze is the third-longest river in the world. It is additionally Asia’s longest river and the world’s longest river to flow entirely within one country.

Record-high temperatures began plaguing much of southern and central China in mid-June, sparking a severe heatwave that has continued unabated since then. The extreme weather has caused droughts across several Chinese provinces in the affected areas and subsequently threatened the viability of autumn grain grown in southern China at this time of year. 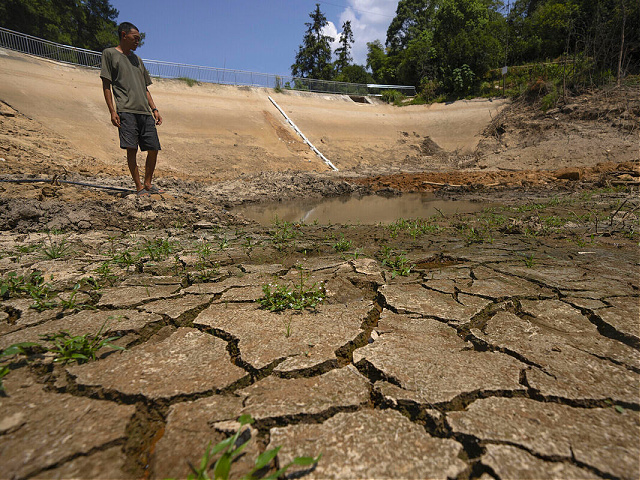 Gan Bingdong stands in the basin of a community reservoir near his farm that ran nearly empty after its retaining wall started to leak and hot weather and drought conditions accelerated the loss of water, in Longquan village in southwestern China’s Chongqing Municipality, Saturday, Aug. 20, 2022. (AP Photo/Mark Schiefelbein)

“Commercial crops in south China, such as tea trees, citrus fruits and mangoes are fragile to heatwaves,” he noted.

A farmer and resident of Chongqing’s Sangping county surnamed Lu told the Global Times on August 22 that his food crops, including sweet potatoes, had been negatively affected by the region’s latest drought. Lu said China’s central government, which directly administers Chongqing, “has been sending water to his village in recent days, and building pipes to divert water in the [upper reaches of the Yangtze] river to help with irrigation.”

China’s ruling Communist Party claimed to have allocated roughly 300 million yuan ($44 million USD) toward drought and disaster relief in central and southern China as of August 22.

The Global Times reported on Monday that this aid package included funding for the following actions:

For autumn grain irrigation, reservoirs in the upper reaches of the Yangtze River are involved to cope with the drought and water shortage, supplying 1.48 billion cubic meters of water downstream [.]

To ensure grain production, the Ministry of Agriculture and Rural Affairs dispatched 25 working groups and 12 scientific and technological teams to help alleviate drought [.]

The meteorological departments are monitoring the growth of autumn grains and will arrange the nation’s high-performance aircraft at the right time to make it rain across different regions[.]

The Global Times is owned by the People’s Daily, which is the official newspaper of the Chinese Communist Party’s Central Committee.