Boy with Terminal Cancer Sworn in by NYPD: ‘I’m Speechless’ 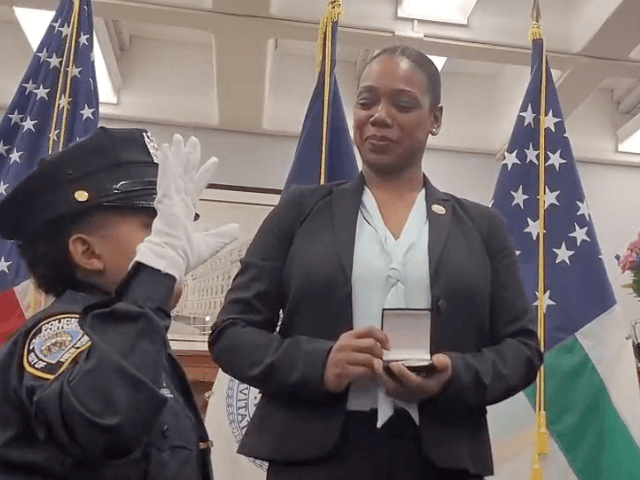 A boy from Texas who has terminal brain cancer was sworn in by the NYPD recently and loved every minute of the experience.

He was also working toward becoming an honorary officer with hundreds of law enforcement agencies across the nation, the New York Post reported Wednesday.

Devarjaye “DJ” Daniel is 10-years-old and suffering from tumors at the base of his brain and spine. However, he was ecstatic when shown how to shoot a rifle and drive an armored vehicle.

Newly appointed honorary NYPD Officer DJ was sworn in yesterday and took a trip around NYC to check out the specialized units within the department.

“Help and have them live their best life to the end, to the end. Don’t give them a constant reminder. That’s what I do for him, you see he laughs, he jokes. He wants everybody to know ‘Hey, I love you so much, give me a hug,’” his father, Theotis Daniel, said.

The young man, who hails from Pearland, got to wear riot gear and also showed off his badge, saying, “If you ain’t got one of these, get off the table!”

In regard to how it felt becoming a member of the force, he said, “I’m speechless right now.”

The NYPD News said Wednesday it was honored to welcome DJ and his father and help reach his goal to be sworn in by 100 departments.

“We are proud to say he easily met his goal, as we are number 387!” the agency announced:

Today, we were honored to welcome 10-year-old DJ and his father to Police Headquarters to be sworn in by @NYPDPC as a part of his goal to take the oath for 100 police departments in 6 months. We are proud to say he easily met his goal, as we are number 387! pic.twitter.com/30aLdJe0w4

Although the little boy has endured approximately 11 surgeries he has stayed positive, according to his father, a single parent with a military background.

“I do appreciate everyone coming out to support him. This is exactly why he has the push to fight harder,” he stated in February.

The group shared photos of DJ enjoying the city with his arms wrapped around his heroes and looking extra sharp in his uniform:

This morning we closed our trip with DJ by bringing him to the airport to fly home.It was an amazing trip because of…

“DJ’s humor and zest for life is so inspiring Welcome to the NYPD my brother,” one social media user said, while another replied, “This is wonderful! God bless you DJ! AND THE NYPD!”