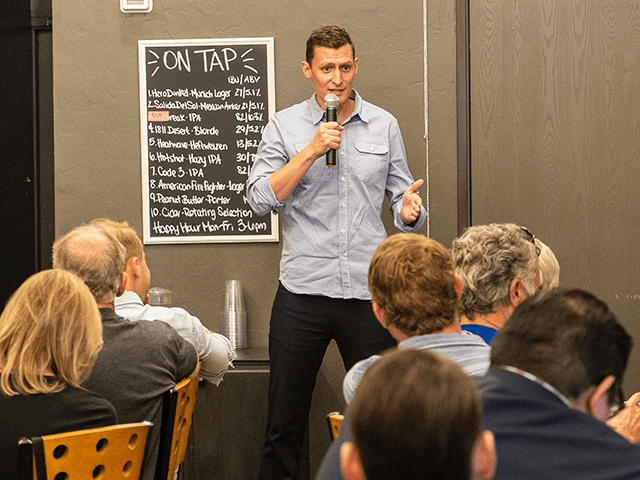 Arizona Republican U.S. Senate candidate Blake Masters, looking to take on Sen. Mark Kelly (D-AZ) if he makes it past the primary, raised over $1.16 million in the first three months of the year, outraising the top of the Republican field with individual contributions.

Masters brought in a massive $1,168,145 fundraising haul, according to his Federal Election Commission filing, outpacing his opponents in individual contributions. In the first quarter of the year, Masters spent roughly $700,000, bringing his total cash on hand to $2,253,009.

The rest of the Republican primary field raised less than a million dollars. Attorney General Mark Brnovich raised a little over  $735,000 but spent more ($974,269), which leaves him with $528,960 cash on hand — more diminutive than he started the fundraising quarter with, according to the FEC filings.

Businessman Jim Lamon might be the most funded but has been self-funding his campaign. In the first quarter, he loaned himself another $5 million, bringing his self-funding total to $13 million, according to the FEC filings. But, when it comes to individual contributions, he only raised roughly $275,000 while burning $4,039,616 in the same amount of time. He has left himself with $7.1 million cash on hand.

As a result of Masters bringing in more than $1 million of individual contributions in three months, his campaign manager, Amalia Halikias, told a group of supporters that “Honestly, it’s… getting embarrassing for the other candidates.”

“We have an Attorney General who is unable to even cover what he’s spending. We’ve got a self-funder setting his money on fire,” Halikias added. “Blake’s opponents are letting consultants take them for a ride.

“Kelly is going to have well over $100 million in his war chest by November,” Halikias added, acknowledging that the Democrat incumbent has raised over more than $61.5 million in the first three months of the year. “Republicans need to win this seat back — fortunately, the smartest, strongest candidate has proven he can seriously fundraise.”

The Arizona Republican primary will be held on August 2, 2022.