He went on to claim that there have been “900 incidents of gunfire reported on school grounds” since the December 14, 2012, attack on Sandy Hook Elementary school. He talked of shootings in theaters, churches, and grocery stores.

Biden said, “And don’t tell me we can’t have an impact on this carnage … When we passed the ‘assault weapons’ ban, mass shootings went down. When the law expired, mass shootings tripled.” 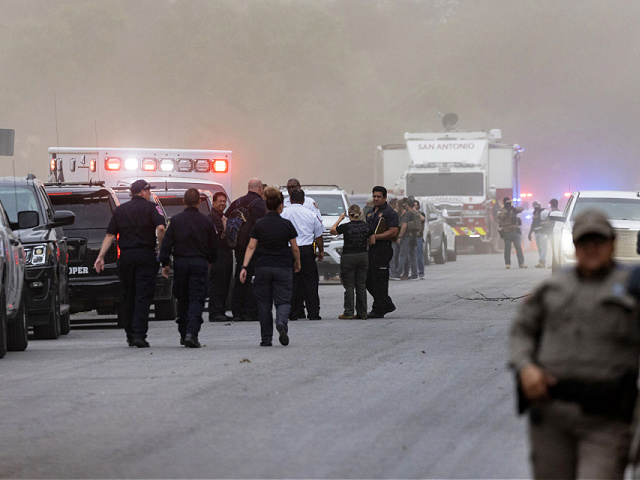 Law enforcement work the scene after a mass shooting at Robb Elementary School where 19 people, including 18 children, were killed on May 24, 2022, in Uvalde, Texas. (Photo by Jordan Vonderhaar/Getty Images)

He criticized being able to walk into a gun store and buy more than one “assault weapon,” never mentioning that purchases from gun stores require background checks.

Biden said, “What in God’s name do you need an ‘assault weapon’ for except to kill someone? Deer aren’t running through the forest with Kevlar vests on, for God’s sake.”

He then criticized the firearm industry, claiming “gun manufacturers have spent two decades aggressively ‘assault weapons,’ which make them the most and largest profit.”

He called for Americans to stand up to the firearm industry.

On March 1, 2022, Breitbart News reported that Biden brought up deer in Kevlar vests during the State of the Union Address.

He called for a ban on “assault weapons” with “high-capacity magazines that hold up to 100 rounds,” and asked, “Do you think the deer are wearing Kevlar vests?”