Are You Prepared for Food Shortages? FBI Issues Warning

I have been warning the public for many years now about how fragile our food system is, where just a handful of companies control most of our nation’s food, as well as most of the world’s food.

Last year I published an article that identified who these globalists are, written by Sam Parker of Behind the News Network, who wrote: “Genocide is an intent of this system, not a side-effect.” See:

Unmasking The Global Food Cartel: Is Massive Starvation and Population Reduction Their Next Move?

If you have not read this article yet, please consider it MUST READING!

There are many indications that food shortages will soon start, from the war in Ukraine to the lockdowns in Shanghai and China, that are putting tremendous pressure on supply chains that will most certainly impact food security across the globe.

In addition, it has been widely reported this week in both the corporate and alternative media that there have been a rash of food processing plants catching on fire all of a sudden.

But perhaps the biggest indicator that food shortages are on the horizon in the not-too-distant future, was a published FBI warning regarding potential “Ransomware Attacks on Agricultural Cooperatives.”

The Federal Bureau of Investigation (FBI) is informing Food and Agriculture (FA) sector partners that ransomware actors  may be more likely to attack agricultural cooperatives during critical planting and harvest seasons, disrupting operations,  causing financial loss, and negatively impacting the food supply chain. The FBI noted ransomware attacks during these  seasons against six grain cooperatives during the fall 2021 harvest and two attacks in early 2022 that could impact the  planting season by disrupting the supply of seeds and fertilizer. Cyber actors may perceive cooperatives as lucrative targets with a willingness to pay due to the timesensitive role they play in agricultural production. Although ransomware attacks  against the entire farm-to-table spectrum of the FA sector occur on a regular basis, the number of cyber attacks against  agricultural cooperatives during key seasons is notable.

According to a February 2022 Joint Cybersecurity Advisory authored by cybersecurity authorities in the United States,  Australia, and the United Kingdom, ransomware tactics and techniques continued to evolve in 2021. Sophisticated, high-impact ransomware incidents against critical infrastructure organizations increased globally. The FBI, the Cybersecurity and
Infrastructure Security Agency (CISA), and the National Security Agency (NSA) observed incidents involving ransomware  against 14 of the 16 U.S. critical infrastructure sectors, including FA, the Defense Industrial Base, Emergency Services,  Government Facilities, and Information Technology Sectors.

Since 2021, multiple agricultural cooperatives have been impacted by a variety of ransomware variants. Initial intrusion  vectors included known but unpatched common vulnerabilities and exploits, as well as secondary infections from the  exploitation of shared network resources or compromise of managed services. Production was impacted for some of the  targeted entities, resulting in slower processing due to manual operations, while other targeted entities lost access to  administrative functions such as websites and email but did not have production impacted.

A significant disruption of grain production could impact the entire food chain, since grain is not only consumed by humans  but also used for animal feed. In addition, a significant disruption of grain and corn production could impact commodities  trading and stocks. An attack that disrupts processing at a protein or dairy facility can quickly result in spoiled products and  have cascading effects down to the farm level as animals cannot be processed. 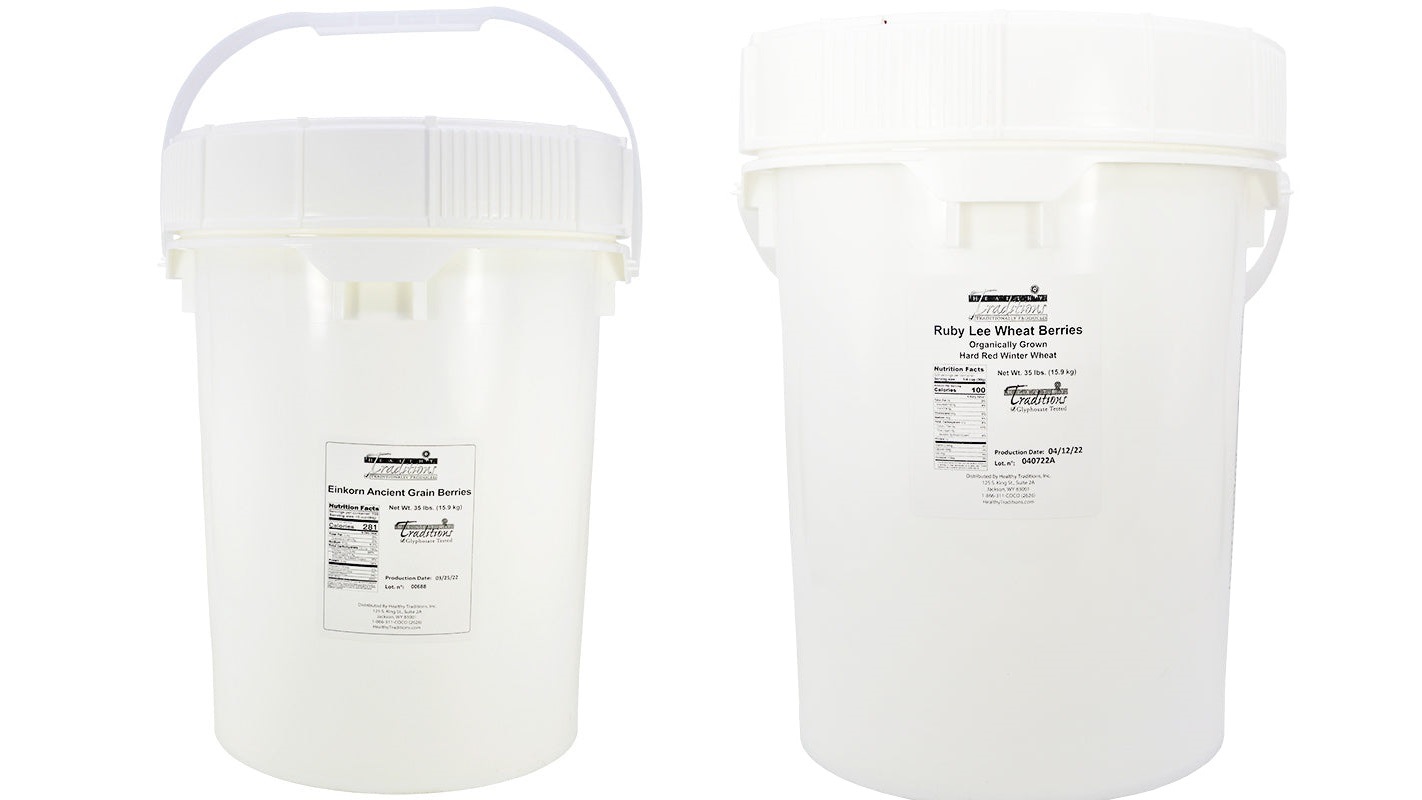 Are You Prepared for Food Shortages? Whole Grains Can be Stored Indefinitely

If you are looking for a food that can be stored indefinitely and provide security against food shortages, you need to be looking into storing whole grains, such as wheat berries.

Whole grains have historically been the best defense against food shortages, because in their unmilled stated, they can be stored indefinitely if stored properly, and then either cooked directly as a cereal like rice, or ground into flour for baked goods.

They can also be sprouted for fresh sprouts, or even grown into grass and juiced as “wheatgrass juice,” providing a powerhouse of nutrition just from simple grains.

Grains and wheat in particular have obtained a bad reputation in recent times as being linked to gluten-intolerant diseases and obesity, but this is due to the contamination of our nation’s grain supply with the herbicide glyphosate, as well as the over-processing of wheat products that render them unhealthy. For more information on this topic, see:

Gluten Intolerance and the Herbicide Glyphosate: A National Epidemic

Is the Gluten Intolerance “Epidemic” as Bad as Claimed or a Clever Marketing Tool?

Is This Enzyme in Processed Food Responsible for Gluten-Sensitive Diseases? Gluten May Not Be the Problem

If you can obtain whole grains (often referred to as “wheat berries”) that are not contaminated with glyphosate and grind them yourself to bake wheat products, you are working with one of nature’s most nutritious foods created by God.

There is a reason why Jesus referred to himself as the “bread of life” (John 6:35) and instructed his disciples to pray for their “daily bread.”

There are some who believe that a return to grinding whole grains for flour from uncontaminated wheat supplies could bring about tremendous healing for many, and that many of our modern diseases today can be traced to the over-processing of our grains.

Of all the foods God has given us, bread, or food made from grain, is the most altered by man. The grocery shelves are filled with denatured, processed grain products. Real bread, however, is bread made from freshly milled whole grains. Without making your own bread and grain foods it will be difficult to obtain real bread or the remarkable health benefits it will bring.

For our ancestors of 100 years ago, whole grains and real bread were the staples of their diet. They did not suffer the cancer, heart disease, or diabetes as we do today. In fact, in 1900 America was the healthiest of 93 countries surveyed. By 1920 it had dropped to 2nd and thereafter America’s health continued to rapidly decline. Today, America is the world leader in chronic sickness and disease as well as obesity. What happened to cause such drastic changes in America’s health?

Prior to the 1900’s most bread baked in this country was done so at home. Grain was milled at the local miller or homes had mills of their own so that flour could be milled as needed and used before it spoiled. The bran and germ portions of the whole grain contain many vital nutrients to good health that oxidize quickly once the flour is milled and the germ portion contains oils that go rancid as well. In the late 1800’s steel rolling mills were invented that sifted the bran and germ portions away, leaving white flour that would not spoil. Thinking this a wonderful discovery, steel rolling mills soon replaced the local millers and by 1910 white flour and white bread became food for the common man.

Three diseases became epidemic immediately and health officials traced the problem to the new white flour that had taken over the market. They urged the millers to put the bran and germ portions back into the flour but the millers refused, choosing instead to enrich the white flour. For the 25-30 nutrients lost by removing the bran and germ, only 4 were replaced. Unfortunately, the synthetic vitamins and minerals used to “enrich” or “fortify” foods are often forms that our bodies cannot readily absorb.

This is a significant turning point in America’s health history. You see, white flour and white bread have always been around, however, its consumption was reserved for the wealthy or royalty. Royalty could afford servants, who would sift out the bran and germ portion to make white flour “dainties and delicacies” as mentioned in Proverbs 23:3. Proverbs 23:1-2 warns us that this is deceitful food and that we should even “put a knife to our throats lest we be given to gluttony”.

The invention of the steel rolling mills made white flour available to the common people, rich and poor alike. By 1920, bread and bread products had drastically changed and America’s health has been declining ever since. Today, most of what we eat has been so altered by processing and preserving it can hardly be called bread at all.

America is now the fattest nation in the world, evidence that we are truly “given to gluttony”. We are now the world leader in heart disease, cancer and diabetes. Asthma has increased by 200% in the past 10 years and the number of children with type II diabetes (previously called “adult onset”) is alarming. Americans, old and young alike, are dependent on antihistamines and allergy relief medications and constipation is no longer an old person’s problem.

Recent government studies state that whole grains reduce the risk of these now common health issues, yet God knew all along. In Deuteronomy 24:6 God instructed the Israelites in wise business practices. It was customary to take a pledge from someone when making a loan. God declared, however, that “no man shall take a mill or upper millstone in pledge, for he would be taking a life in pledge” (emphasis mine). God knew the importance of bread for maintaining life and health, therefore the capacity to mill grain was equated with the very life of a person. (Sue Becker – Source.)

My company, Healthy Traditions, has been investing in high quality whole grains that test free from the herbicide glyphosate since last year, buying up as much of it as we can find, since it is so hard to find uncontaminated grains today, and that is BEFORE the coming food shortages where even contaminated grains will be difficult to find.

We are storing these high quality grains all across the U.S. as well, so that if an “accident” happens to one of our warehouses, we will not lose our entire inventory.

Investing in whole grains and a good grain mill could be one of wisest investments you make right now if you are looking to provide some food security for you and your family. The cheaper grain mills are now difficult to find, and they will probably become even more scarce in the days ahead.

We have many articles on working with whole grains on the Health Impact News network as well, and it would be wise to start learning how to make your own products from whole grains, and print out these articles while you still can.

Here are a few to get you started: