Animal Rights Protester Chains Herself to Basket During NBA Game 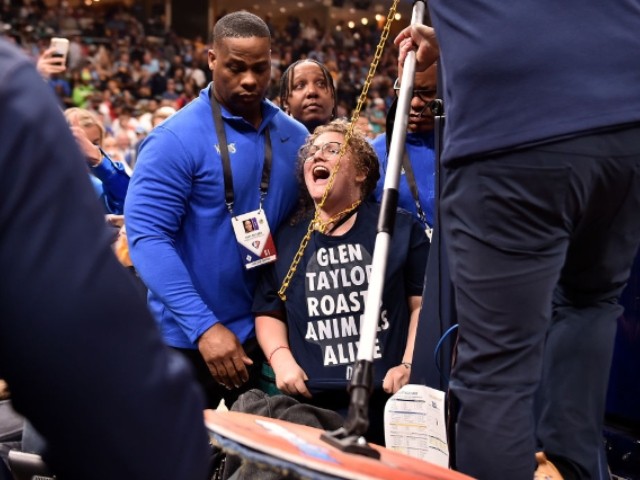 NBA games have seen their fair share of protests in recent years, but this is something very different.

An animal rights activist chained herself to the back of the basketball net during the Memphis Grizzlies-Minnesota Timberwolves game on Saturday.

Security had to carry out a protester who chained herself to the back of the basket. 😳

Believe it or not, this is actually not the first protest this week in which Taylor was targeted. Four days prior to the activist chaining herself to the net, another protester glued herself to the floor when the Timberwolves faced the Clippers.

The animal activist group Direct Action Everywhere has taken responsibility for both protests.

The woman who chained herself to the Grizzlies’ hoop & threw flyers as part of ongoing efforts to get Timberwolves owner Glen Taylor to step down and return factory farm bailout money is @DxEverywhere’s Zoe Rosenberg. https://t.co/4XQWB195mK #GlenTaylorRoastsAnimalsAlive pic.twitter.com/RtxxfG2HUS

Rosenberg reportedly got close to the net and concealed her shirt by draping a towel over herself and acting as if she were a member of the ball crew.

Minnesota beat Memphis 130-117 to take the first game in their playoff series.