2022 Oscars Go Down as the Second Least Watched Ever 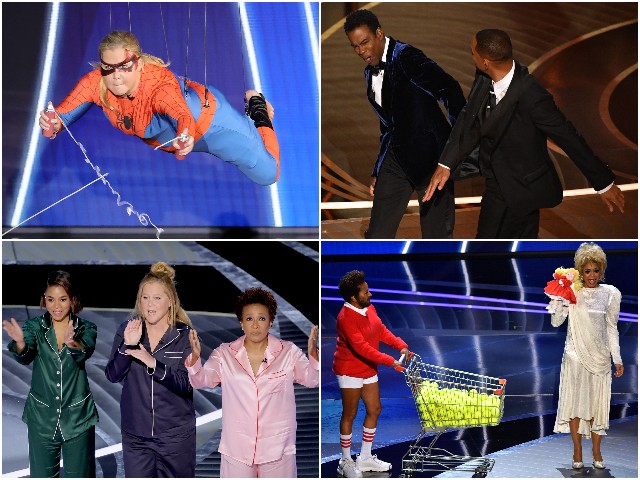 A paltry 15.4 million viewers tuned into Sunday night’s debacle of an Oscar telecast, the second-worst in the history of a telecast that just a few years ago was attracting 30 to 40 million viewers without breaking a sweat.

For context, back in 2017, when the Oscars earned 33 million viewers and 9.1 million demo viewers in the 18-49 age group, people were freaking out over the plunge in public interest.

Well, last night, the number was less than half that 33 million… That’s how bad things are.

The left-wing Hollywood Reporter uses the word “rebound” in its ratings headline. What a joke. By any definition, this is no rebound. Sure, it’s an improvement over last year’s utterly devastating 10.4 million number, but that’s all it is. A return to 30 million-plus viewers is the only thing that would qualify as a rebound.

Before last year, no Oscar telecast in history had ever dropped below 20 million viewers. That’s how bad this 15.4 million number is.

And this is precisely what Hollywood deserves… Every facet of the entertainment business is facing this rejection from the American people, a population sick of these bubbled and hypocritical elitists lecturing and shaming us rather than entertaining us. Every award show is bottoming out in the ratings. America hates these hateful people. What’s not to hate?

And this Sunday’s Oscar telecast was one of the worst things we’ve ever seen.

Will Smith committed an assault against a comedian over a nothing joke, and the entertainment industry is so morally broken he wasn’t removed from the building and charged with a felony. In fact, about 40 minutes later, Smith got a standing ovation and an Oscar.

The worst of it was watching the entire industry oppose Florida’s much-needed “Don’t-Groom-Little-Kids” bill.

Hollywood was always full of a disproportionate number of thugs and degenerates, but this was something entirely new. These depraved narcissists aren’t even trying to hide their depravity anymore. Instead, they are openly lobbying to normalize their kinks, openly opposing a law that protects prepubescent kids from being groomed in the classroom, and openly assaulting comedians who dare to make them a little uncomfortable.

The whole Hollywood spectacle is now something grotesque instead of classy, perverse instead of entertaining, and disturbing rather than magical.

People have and will continue to reject pumping this filth into their homes through the television set.

It’s not only sewage; it’s smug, unfunny, elitist, violent, and perverse sewage that wants to ridicule you (while assaulting anyone who ridicules them) and have sex with your children.