11 Conservatives Vote Against $40 Billion in Aid to Ukraine 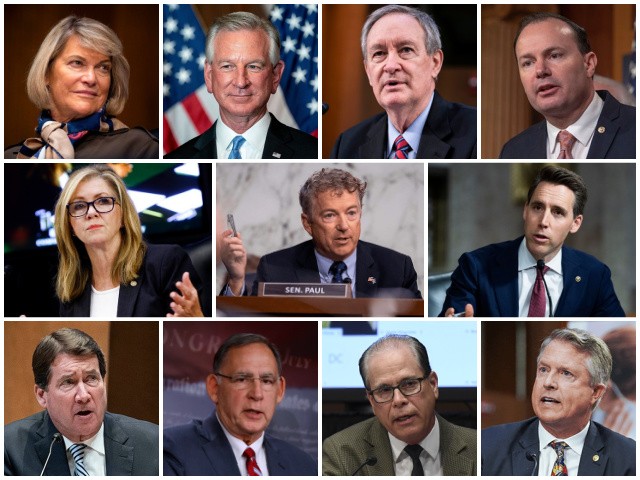 Eleven Senate Republicans voted on Thursday to defy the Republican and Democrat establishment and oppose a $40 billion aid package to Ukraine.

The Senate voted Thursday afternoon to approve H.R. 7691, the Ukraine Supplemental Aid Package, 86-11. Nearly the entire Senate voted for the gargantuan aid package to the embattled eastern European nation, and notably, only Republicans opposed the legislation to grant tens of billions of dollars in military and economic aid to Ukraine.

The 11 Senate conservatives that voted against the bill cited that America cannot keep spending more of its taxpayer dollars while its people reel from inflation or grapple with baby formula shortages. They also contended that it was not in America’s interest to further instigate conflict with nuclear-armed Russia. Many of them also raised objections to spending $40 billion without proper offsets to the massive spending on foreign aid.

Senate Majority Leader Chuck Schumer (D-NY) and Senate Minority Leader Mitch McConnell (R-KY) have tried to quickly advance the passage of this bill and managed to pass it with the support of the majority of Senate Democrats and Senate Republicans.

“Less than a year after ending the war in Afghanistan, establishment Republicans are whipping votes for the Democrats to pour billions more into a new foreign war—with almost no debate,” a senior GOP aide told Breitbart News. “Americans are sick of this kind of nation-building and have no interest in flirting in a new war with Russia.”

The 11 Senate Republicans that voted against the $40 billion aid package include:

Paul falls into the noninterventionist wing of the Republican Party like his father, former. Rep. Ron Paul (R-TX). The Kentucky senator “single handedly” moved to hold up the Ukraine aid package until Thursday.

The Kentucky senator believed that the Ukraine aid package needed an inspector general to ensure that the billions of dollars are spent wisely.

He further emphasized that America does not have the money to spend $40 billion. He told Breitbart News Daily host Alex Marlow that America would have to borrow the money from China to send aid to Ukraine.

“I think it’s important to know that we don’t have any money to send, we have to borrow money from China to send it to Ukraine. And I think most people kind of get that, and many Republicans will say that when it’s a new social program, but if it’s military aid to a country, they’re like we can borrow that, that’s a justified borrowing,” Paul explained to Marlow.

Hawley falls along the more nationalist, populist wing of the Republican Party. He delivered his foreign policy vision at the Center for a New American Security (CNAS) in November 2019. The Missouri populist said that his foreign policy would be centered on keeping Americans “safe and prosperous,” while ending America’s decades-long wars in the Middle East.

He has said that most of America’s veterans are from middle- and working-class families, and come from families with a history of military service.

Hawley said in his speech, “It is time for a new departure, based on America’s needs in this new century. Because the point of American foreign policy should not be to remake the world, but to keep Americans safe and prosperous.”

Now, during this latest legislative battle, Hawley said that this Ukraine aid package serves as the latest attempt to nation-build and that it does not serve the country’s interest.

“Spending $40 billion on Ukraine aid – more than three times what all of Europe has spent combined – is not in America’s interests. It neglects priorities at home (the border), allows Europe to freeload, short changes critical interests abroad and comes w/ no meaningful oversight,” Hawley wrote.

Spending $40 billion on Ukraine aid – more than three times what all of Europe has spent combined – is not in America’s interests. It neglects priorities at home (the border), allows Europe to freeload, short changes critical interests abroad and comes w/ no meaningful oversight

Hawley said in an interview with Fox News this week after Tuesday’s primaries that it is “clear” that the Republican base wants to unite behind the “populist” agenda:

Lee falls in line with a more constitutionalist wing of the Republican Party. Lee proposed an amendment that would streamline and target the aid to better meet the needs of the Ukrainian people. He said in a statement:

The House proposal would spend nearly ten times the annual defense budget of Ukraine while delegating broad discretion to the President and bureaucrats regarding where and how most of the money is spent.  Much of the money will likely go to nations across the world not involved in the conflict. Putin’s aggression is indefensible, and we should look for appropriate ways to support Ukrainians in the noble defense of their homeland. We must also make sure Congress maintains its constitutional role of directing engagement in conflict and ensure that we are not spending unnecessary funds while in a time of historic inflation and ballooning national debt.  My amendment will ensure we can help our friends without compromising our constitutional or financial integrity.

Sen. Marsha Blackburn (R-TN)
Blackburn said although she supports the Ukrainians’ fight against Russia, she believes that there will not be any accountability or oversight for the funding. She said:

I fully support the Ukrainian people in their fight against Russia. Vladimir Putin is a sick and evil human and must be held accountable.  As written, this legislation has zero accountability into how taxpayer dollars are being spent. For example, the State Department is asking for $110 million to repair the Kyiv Embassy but has not even conducted a full damage assessment. Meanwhile, many previous authorizations – including $100 million in food aid – have yet to be executed.

Hagerty, who was Trump’s former ambassador to Japan, said in a recent interview with Fox News that America cannot send aid to Ukraine while ignoring the many crises unfolding under President Joe Biden’s administration. He explained:

I’ll be a no on the package, Maria. It’s, as Senator [Rand] Paul said, we’ve got crises erupting across the nation. In my home state, mothers can’t get baby formula in Knoxville. You’ve got grandmothers and mothers that have sons and grandsons that won’t come home because of fentanyl overdoses because of the illegal drugs that are flowing across our southern border that President Biden will not protect. You’ve got crime running rampant across America, and people need to look at our nation and think we’ve got to look at… our own national security first, as Senator Paul has said. Other nations are watching us, too. China is seeing us not behave like a serious nation, rushing to put more aid into a country, who, again, I certainly don’t have anything against the Ukrainians. We want to see them win, but pumping more aid into that country when we’re not taking care of our own country—the best thing that Biden could do is stop the war that he’s waged on American industry. That would lower prices overall, that would take the funding away from Putin’s war machine against Ukraine. It would make our economy do better here. Biden will not do that. Biden will not be serious, and it’s taken us into a very bad direction. So, he just wants to throw another 40 billion dollars of American money into this when you’ve got other nations more approximate—the European nations that have sort of stayed with us, but they haven’t done this level of investment […] I know that there are other senators that are thinking very hard about this right now, as I have done. And I think it’s going to be up to each one’s conscience. We’ve already committed a great deal of money to this effort area. And I know that people are concerned that that money is being well spent, and we should certainly take effort to oversee that very carefully. At the same time, we have got to take care of things here at home first. That’s our primary duty.

Lummis said in a statement about the vote:

I am fully in support of Ukraine and its efforts to push back on Russian aggression. I am, however, concerned about this particular request. President Biden requested $33 billion, yet we are voting on a $40 billion package. It’s important to give Ukraine the support they need, but we also need to be pragmatic about the amount of money we are spending.

Braun said in a statement this week about the Ukraine vote:

I support helping Ukraine expel the Russian invasion, but as inflation, gas prices, and shortages wallop Americans here at home I can’t support $40 billion of new spending unless it’s offset with cuts or taken from already authorized funds, especially when the European Union isn’t matching what we’re doing to end this conflict in their own backyard.

“The federal government can’t keep spending money without accountability or oversight. I’m all for supporting Ukraine, but we need to be responsible with taxpayer dollars,” Tuberville said in a statement.

The federal government can’t keep spending money without accountability or oversight. I’m all for supporting Ukraine, but we need to be responsible with taxpayer dollars.

Boozman said in a statement on Thursday:

Ukraine has fought valiantly against Putin’s invasion, but it’s time to think more long-term and strategically about the U.S. role in this ongoing conflict. The Biden administration should offer a comprehensive plan with clear objectives and assurances that our aid and support is targeted and effectively protecting America’s interests. In light of President Biden’s disastrous policies on domestic and international fronts, the lack of oversight of U.S. taxpayer dollars, and his refusal to make American energy production a centerpiece of our response to Russia’s malign behavior, I can’t support this package.

Marshall said in a statement:

Combined with the original $13.6 billion installment signed into law in March, passage of this bill brings the total spending on Ukraine this year to $53.6 billion – the largest foreign aid package provided by Congress in more than 20 years. All the while, our NATO allies contributions have dropped off significantly, turning this essentially into a proxy war between the U.S. and Russia, there is no long term strategy, and no end in sight to the spending. Not to mention, this spending in support of Ukraine is coming at a time when our border is being overrun by illegal crossers, fentanyl is poising our communities, and inflation and supply issues are still rattling every American home. Our allies must step up their support and our leaders in Washington must demand more accountability, more strategy, and more prioritization of the issues Americans are facing here at home.

“I strongly support the United States assisting Ukraine in its own fight to remain free and independent from Russia’s totalitarian control, and providing assistance to Ukraine is a matter of both long-term national and economic security,” Crapo said in a statement. “However, any further spending must be offset.”